I've been attempting to create an authentic mid-Republic Roman army to use at any of the Medium (1200pts), Large (1600pts) or Very Large (2000pts) sized games played in multiplayer.

My aim has been to create either an army built around a single Roman legion, or to build a consular army, which was made up of two legions. Both of these armies also require plenty of allied troops in addition to the legionary troops.

However, I can't find a good fit to get the description of historical Roman military organizational structure to match well the required points totals.

I'm not an expert on the Roman military, and my information has largely been gained from these two Wikipedia sources:

A typical mid-Republican Roman legion is described as containing:

To recreate this in game units would be:

So the Hastati/Principes and Velites match perfectly. The Triarii at 2.5 I think can be reasonably rounded up to 3 units and made the legion's commander/general unit. The Cavalry can be rounded down to one Cavalry unit (300 men becoming a 240-man game Cavalry unit).

So that would make a game Roman legion total 4,560 men, compared with the 4,500 men that the historically-described list totals, which is very close. I've also seen the legion described as having 5,000 men, so I'm not sure what these missing 500 men would represent. Possibly non-fighting legionary support personnel (like messengers and others)?

In any case, the points cost of the legion as described above would be 624 points. Here's a picture of how it would look in the game:

The legion (or two legions in a consular army) went into battle accompanied by allies (socii) who were deployed on the flanks of the legion(s) as wings (alae). There is less information about their composition and they were probably more subject to variation.

However, a couple of points are noted:

1) The number of foot in an alae was equal to the number of legionary foot. So for a consular army there would be two legions deployed in the centre and an alae on either side of them, all four formations having similar numbers of foot troops. An army built for the game around a single legion would, I think, use an alae each on the left and right, but have them half size, so the overall 50:50 proportion of legionary foot to socii foot remains the same. 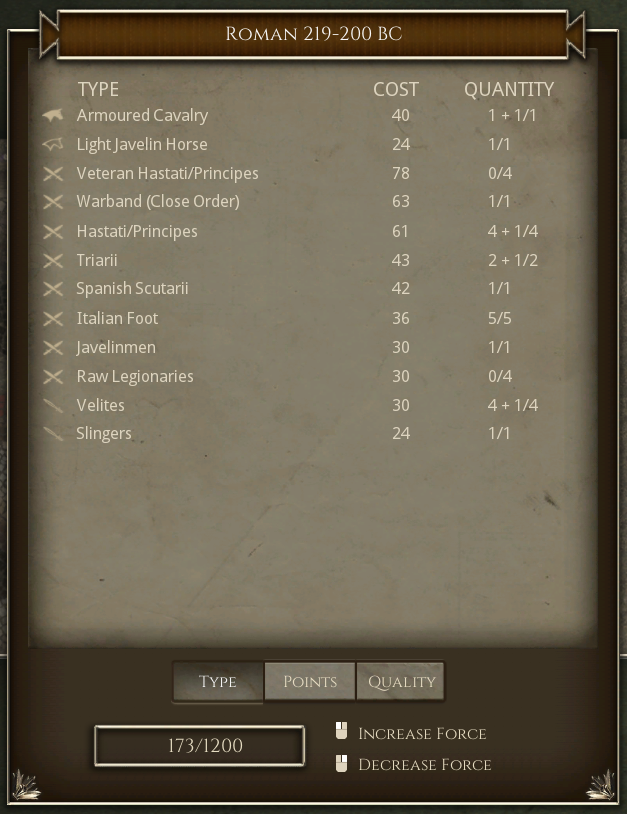 - Can create a legion.
- The number of available allied foot is equal to the number of legionary foot, both at 4,320 men.

- The available cavalry would only make a ratio of 1:1.5 for the legionary cavalry compared with the allied cavalry, which is far from our 1:3 target.
- There is 173 points left over which can only be spent on legionary foot troops (Hastati/Principes, Triarii, Velites).

This size doesn't work very well as it's somewhere between a one-legion and a two-legion consular army. 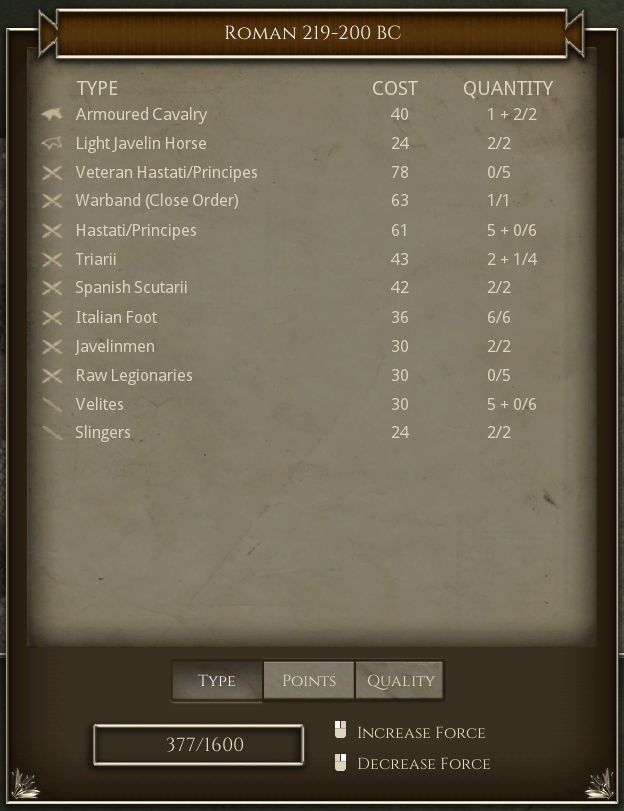 - Can create a legion.
- The number of cavalry is perfect, allowing a 1:3 ratio of legionary cavalry to allied cavalry.

- Too many spare points for a one-legion army and two few for a two-legion one.

Based around a consular army of two legions. 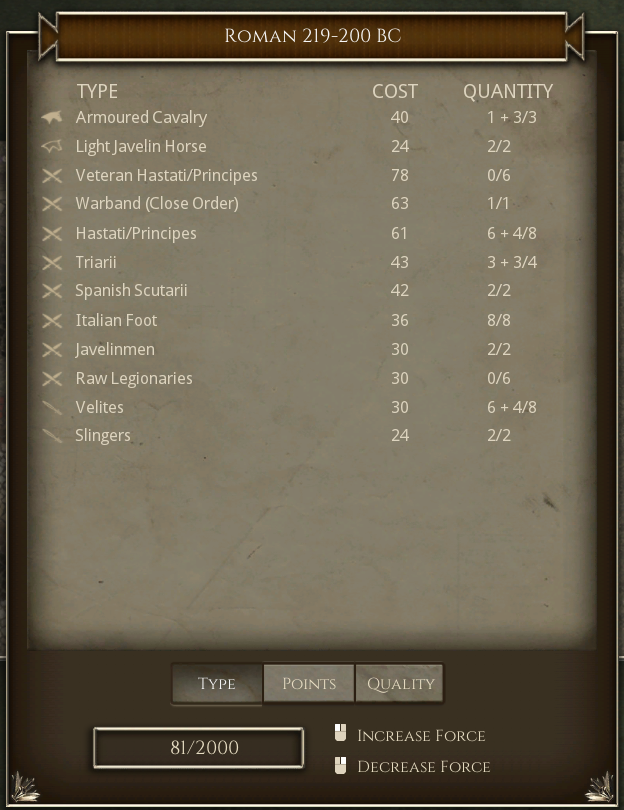 - The available cavalry ratio is 1:2.5, which is fairly close to 1:3 but not exact. Since there are two legions now, there would be two legionary Cavalry units on the right flank and three times that number of allied cavalry, a mix of medium and light cavalry, on the left flank. To reach a ratio of 1:3, one extra cavalry or two light cavalry more would be needed.

- There are 81 points to spare, which, again, can only be spent on legionary foot.

So, I would suggest some slight rebalancing for this list with regards to the numbers of troops allowed. It probably won't be possible to get it to match exactly with the 2000 points limit, but it could be closer.

Here are some potential alterations:

- More non-legionary foot should be allowed. That spare 81 points could at least buy another 960 allied foot, which would make the balance of legionary to allied foot at 7,920 men vs 8,640 men, which, while not equal, is a bit more respectable.
- while the current ratio of 1:2.5 is close to 1:3, the cavalry allowances could maybe increase, although there might not be points to utilize it without neglecting the allied foot.
- the number of allowed legionary foot (Hastati/Principes, Triarii, Velites) could be reduced to compensate for the other changes. Personally, I'd have nothing against even fixing the numbers of legionary foot and the army variation would come in the composition of allies.

So it looks as if to get the consular army perfect would require a little over 2000 points, meaning that compromises would have to made somewhere whatever happens. Or, potentially, there could be the use of customized points sizes for games.

Here's the later mid-Republican army. It has some extra thureophoroi, Cretan archers and an elephant to increase the proportion of non-legionary troops, so it's a bit easier to use up the allowed points for the army. 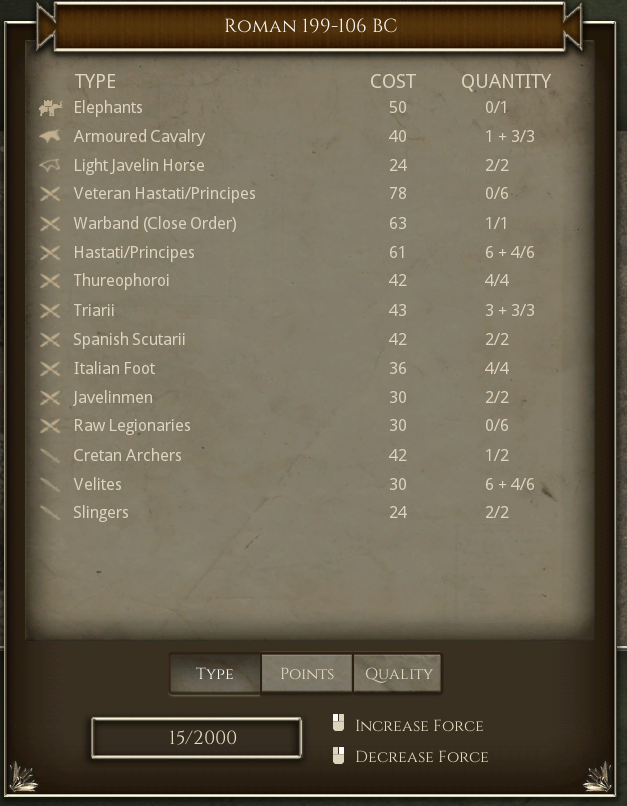 Here's an attempt at a 2000 point consular army using the 199-106 BC list. It has two legions, an alae either side of them and the cavalry on the flanks, as shown in the Wikipedia article linked to earlier (reproduced below, in reverse order from the picture).

It is lower than the desired numbers for alae cavalry on the left flank and also alae foot, but the numbers required would mean going above 2000 points. So this looks like the best fit. Could possibly give the left flank one of the right flank's cavalry and shift some infantry over to compensate.

Here's the list. There would have been less points left over if I'd picked two Cretan archers and one Javelinmen, rather than vice versa, but there's already plenty of light troops with all those Velites. 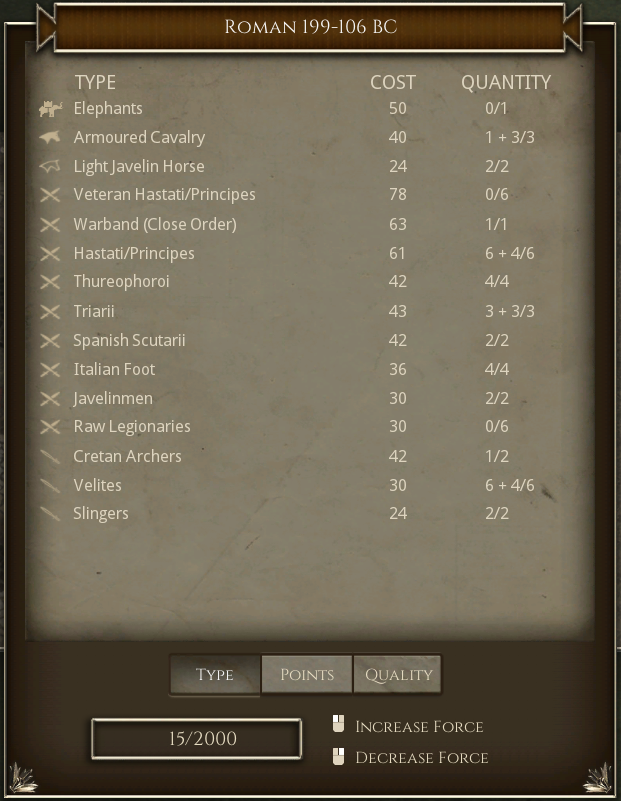 New model Roman mid-Republic legion. Could round down the number of Triarii from 2.5 to 2, instead of rounding up to 3. The general I think is better used in leading one of the Hastati/Principes units rather than Triarii.

With a decrease in the number of troops in a legion and more points to spend on the alae it would be easier to reach our desired historical proportions. That's if it was possible to spend more points on non-legionary troops...
Top
Post Reply
4 posts • Page 1 of 1