To replace or edit the design on an existing banner we only need to edit the Diffuse texture. The Normal and Spec texture files do not seem to affect the design on the banner. They do have a bearing on the appearance of the object on top of the pole, but unless you are an expert 3D modeller you cannot change that.

Open the Diffuse texture that you want to edit in your graphics editor. I use Paint Shop Pro 7, which is an ancient program, but I have used it for years and have gradually learnt how to use it. I am too old and set in my ways to learn anything else, but I guess I may be forced to when I eventually upgrade my PC. I believe Paint.net can do the job, and is a free download, but I have no experience of using it.

If we open the warm Roman banner (UnitFlags_00_Diffuse@.dds) it looks like this: 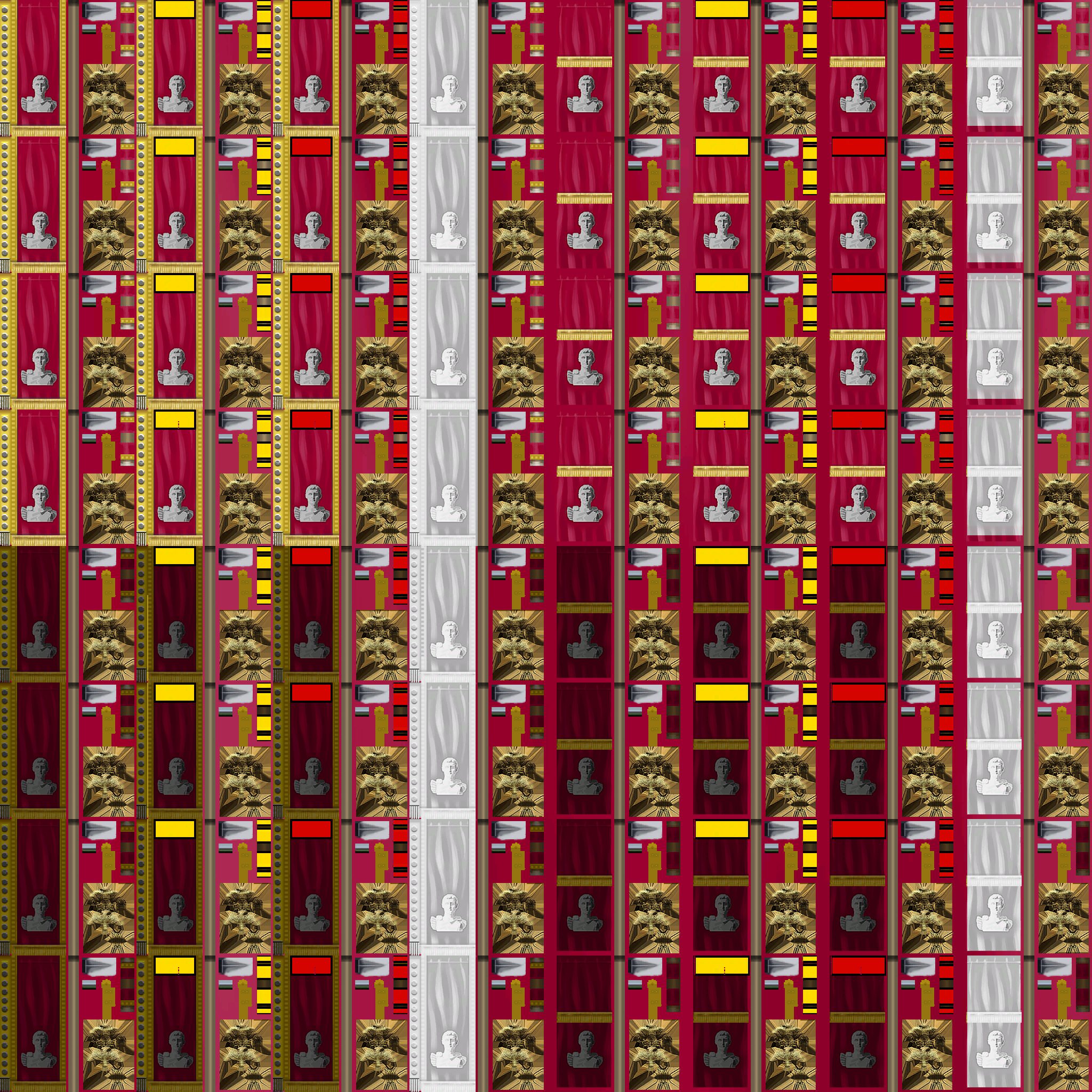 Yes, it’s scary isn’t it? Instead of one or two banner pictures, like you were probably expecting, there is actually 64!

There are two separate banners, a long generals flag, and a short unit flag. Then you have steady, disrupted, fragmented, and routed versions of each flag. Then you have those combinations duplicated for each of the four different levels of attrition that the flags indicate. Then all of that is duplicated again for the darkened flags that show when the players unit has moved.

By now, you may have closed your graphics editor and given up! But don’t worry, I will explain carefully what you need to do, it really isn’t that difficult or tedious.

Let’s take a close look at what is going on here. To make it a bit clearer I will load the Alpha Channel, which cuts out all the unnecessary parts of the texture, and just shows the bits that are displayed on the banner model. I have also numbered the 8 banners in the top row. 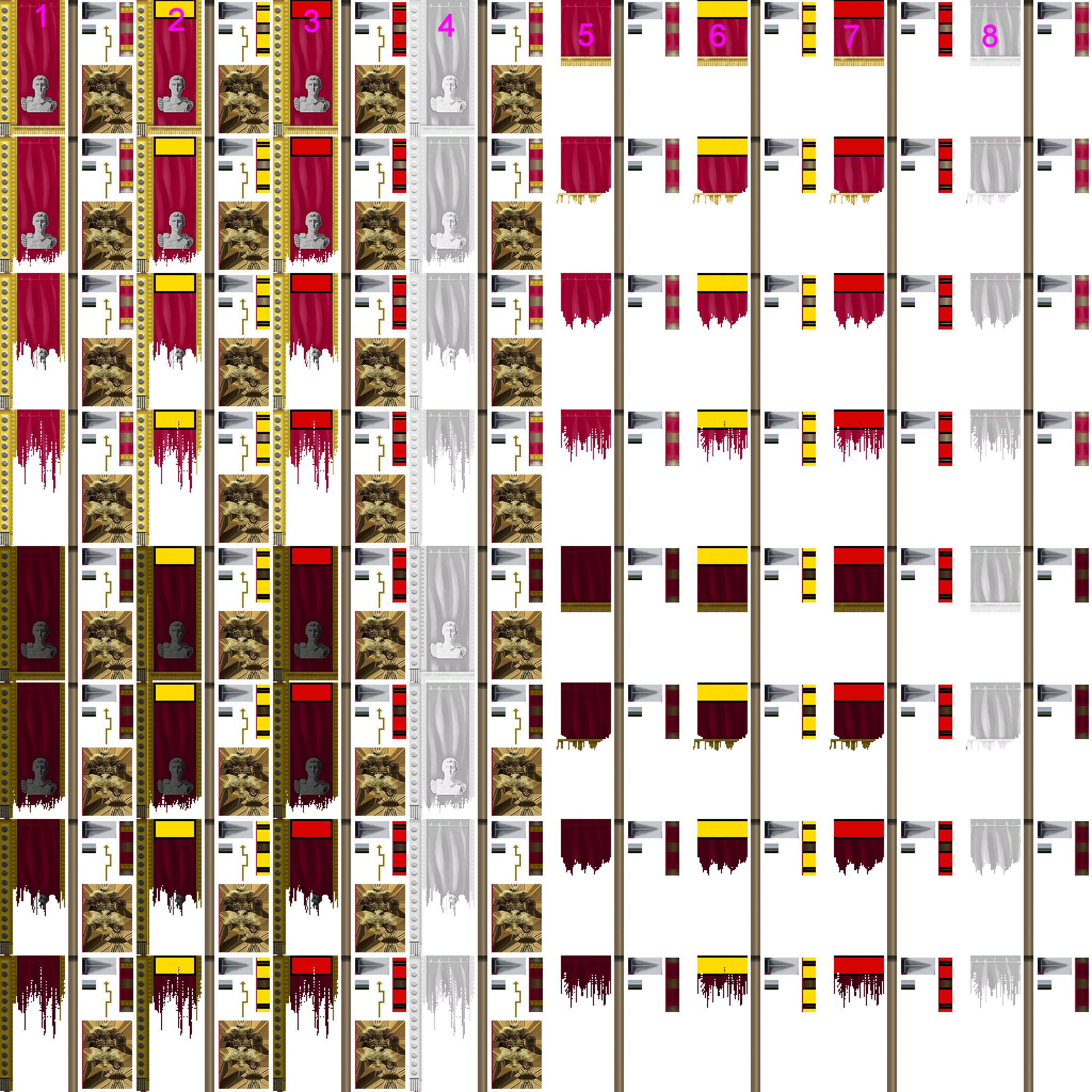 All the banners in the top row are used for indicating full (or near to full) strength units.

Banner 1. This is a steady generals banner.
Note that all generals banners have streamers down the side. Each flag has only one streamer in the texture, but on the model it is used for two, one either side of the main banner. For the Roman flags in the screenshot, the streamer is the vertical yellow strip with the silver discs.

Banner 5. Steady unit banner. Note that the unit banner is much shorter than the generals banner, the space below should not be displayed on the model. There is a bug that sometimes allows this part of the texture to be displayed, I call it the Long Banner problem, I think I have a simple solution to it, which I will explain later.

First, roughly plan what your new design is going to be. You will need two designs, one for the long generals banner, and another for the much shorter unit banner. Then create those designs in the top row, in the banner spaces 1 and 5.

Tip 1: I like to choose a flag base colour that can be easily swapped in the graphics editor for another colour, without mucking up any other colours already in the texture. Green, blue, or purple are good for this purpose, as they are not present in the rest of the texture. You should avoid yellow and red, as they are the colours for indicating disruption and fragmentation, and so are present in many places in the texture. This will make it very easy to create a duplicate warm side flag. For example, if you have chosen green as the base colour for your flag, after you have completed the cool side banner, you might be able to simply change the green to red or orange or purple in your graphics editor, and it will only take seconds to create the warm side banner! When doing this just be careful you do not radically change the colour of your pole top objects.

Tip2: It is very helpful to work with the Alpha Channel loaded in the texture. That will show you exactly what parts of the texture will be displayed on the model, and blanks out the rest. Also, when you come to the copying and pasting, you can zoom in close and match up the pixels precisely, as you can see the edges of the displayed areas.

Once you have completed your generals banner in space 1, copy and paste it into banner space 2 to create the disrupted generals banner. You will have to create the yellow box with the black line around it. There are several ways to do that, I prefer to use the eraser tool to reveal the original texture below.

Then copy and paste your disrupted generals banner into space 3, ensuring that the box is red to indicate the fragmented status.

Then copy the steady generals banner into space 4 to create the routed generals banner. You will need to turn it white, but I like to retain a hint of the banner pattern, so I first turn the flag black and white, and then increase the brightness of the banner by about 128%. The exact amount will vary, depending upon the lightness of the steady banner, and possibly on your graphics editor.

Then do the same with your new unit banner in space 5. Copy and paste it into spaces 6 to 8, to produce the disrupted, fragmented and routed versions of the unit banner.

In the next screenshot I have highlighted in blue, the textures for the cross poles of the banners in the top row: 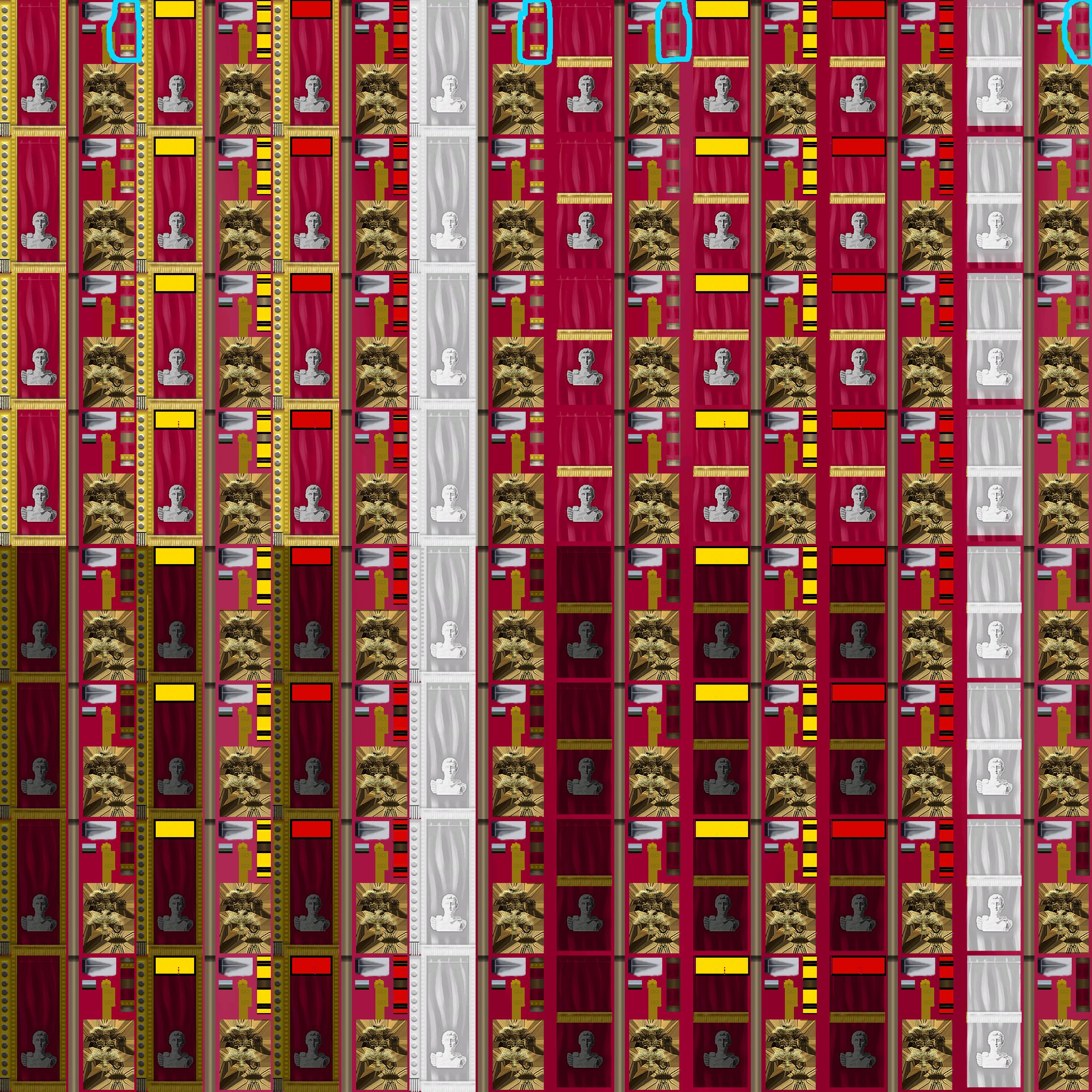 You may need to change the banner colour areas on the cross poles to match your new banner colour. You will also notice that the vanilla generals cross poles have some areas painted to match the streamers, but I tend not to bother with that anymore, and just paint the whole cross pole to match my new background colour, apart from the metal parts. It makes things a lot easier.

Once you have painted the cross poles, you have completed the top row. You now have to copy the entire row, and paste it into rows 2 to 5. Make sure you have loaded the Alpha Channel, and zoom in closely, it will enable you to paste the new rows as accurately as possible.

When you have pasted into row 5, you will need to darken all the row 5 banner textures, except the routed flags. I do this one flag (and cross pole) at a time. Make sure you do not darken the yellow (disrupted) and red (fragmented) boxes, or the white routed banners. The amount by which you darken the flag will depend on the brightness of the original steady banner, but you want it obviously darker, without turning it so dark that you lose the original colour completely. You can’t highlight the whole row and darken it, because you will darken all the pole top objects and spear points.

Once all the flags (and cross poles) of your new row 5 are darkened, copy and paste the whole row into rows 6 to 8.

Save your new texture file into a safe folder, do not overwrite the original banner in your games main folder! It is recommended to save as a DXT3 .dds file.

You have now completed your new banner texture. If you are creating the new banner for a mod, campaign or scenario, it will have to be placed in the mods Data/Battle/Banners folder, together with the original Normal and Spec textures for that banner. This seems to be a very important step, because without the Normal and Spec textures sitting in the same folder as your new banner you will probably get the Long banner problem!
Last edited by Paul59 on Thu Nov 29, 2018 8:08 pm, edited 2 times in total.
Field of Glory 2 Scenario Designer - Age of Belisarius, Rise of Persia, and Wolves at the Gate.

I have just made a slight edit to the first post.

In the sentence where I tell you how to create the Routed banners, I forgot to say that I first turn the flag into a black and white image, and then increase the brightness. That will remove any trace of colour from the routed banner, which is what you want.

There are probably many ways to create a black and white image, depending upon your particular graphics editor. In my old Paint Shop Pro, I leave the routed banner highlighted, open the Colourise function, set the Hue to any colour, it does not matter, and the saturation to zero. That will turn the routed banner to a grey scale image, but leave the rest of the Banners texture file in colour. You can then increase the brightness of the Routed Banner to turn it mostly white, but leaving a strong hint of the original pattern.
Field of Glory 2 Scenario Designer - Age of Belisarius, Rise of Persia, and Wolves at the Gate.