With the long discussion about Warbands potentially being too strong, maybe ahistorically strong despite the fact we actually have little to no data on the interaction between these two types of fighting traditions, I decided to put it the test vs a human. 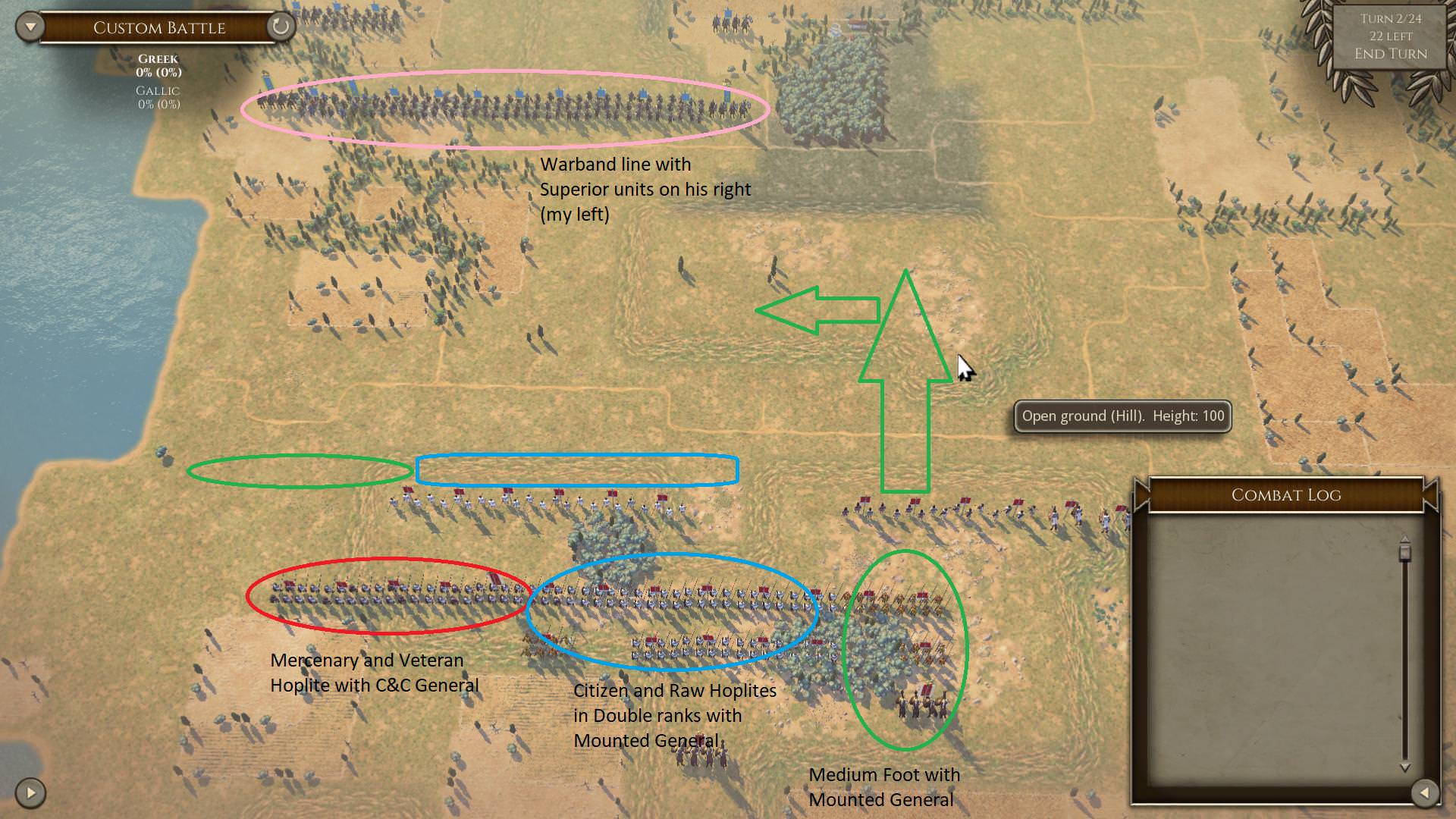 The initial deployment plan was to have the Mercenaries on the left execute a flank march into the Barbarian right and take advantage of superior maneuverability while the Citizen and Raw hoplites in the center would use depth of numbers to hold. Once I saw the Barbarian deployment, it as clear the the right would have to execute the flanking maneuver. 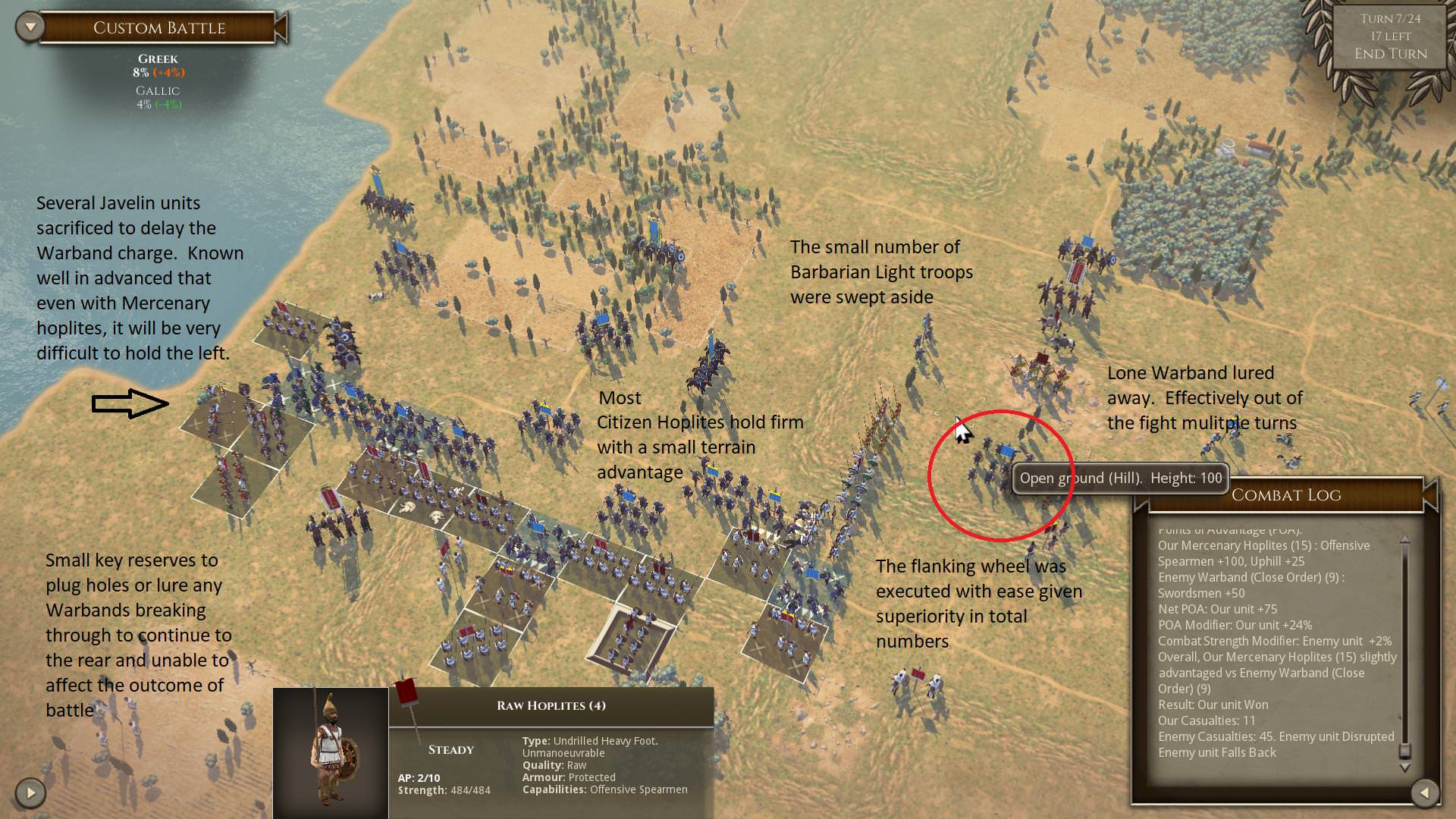 Battle is joined. I cut out some of the early turns as they were uninteresting. Simply put the Warband army was too small on an equal point scale match the width of my line and the few skirmishers on the Greek right were brushed aside by a combination of light horse and superior numbers of archers and slingers. Hoplites and medium spears immediately followed behind and flanked the Barbarian infantry line. Medium spears held the hills to keep Barbarian cavalry in check. One ill disciplined Warband broke through but unruly pursuit took it out of battle for many turns. 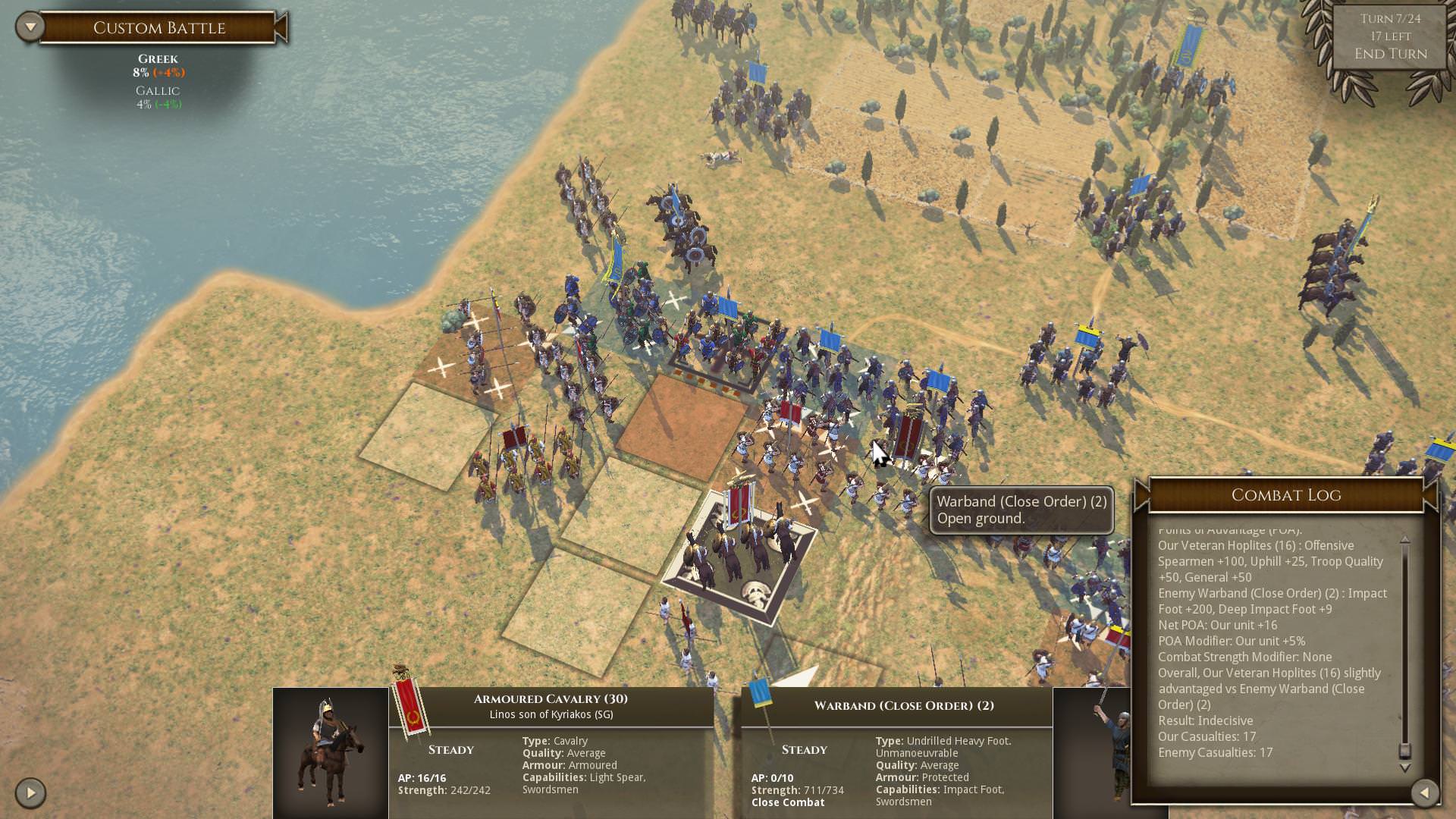 Collapse of the Greek left in progress. Support from the centre was brought in to slow the advance but it was never likely that I could prevail against superior warbands in the open backed by cavalry. 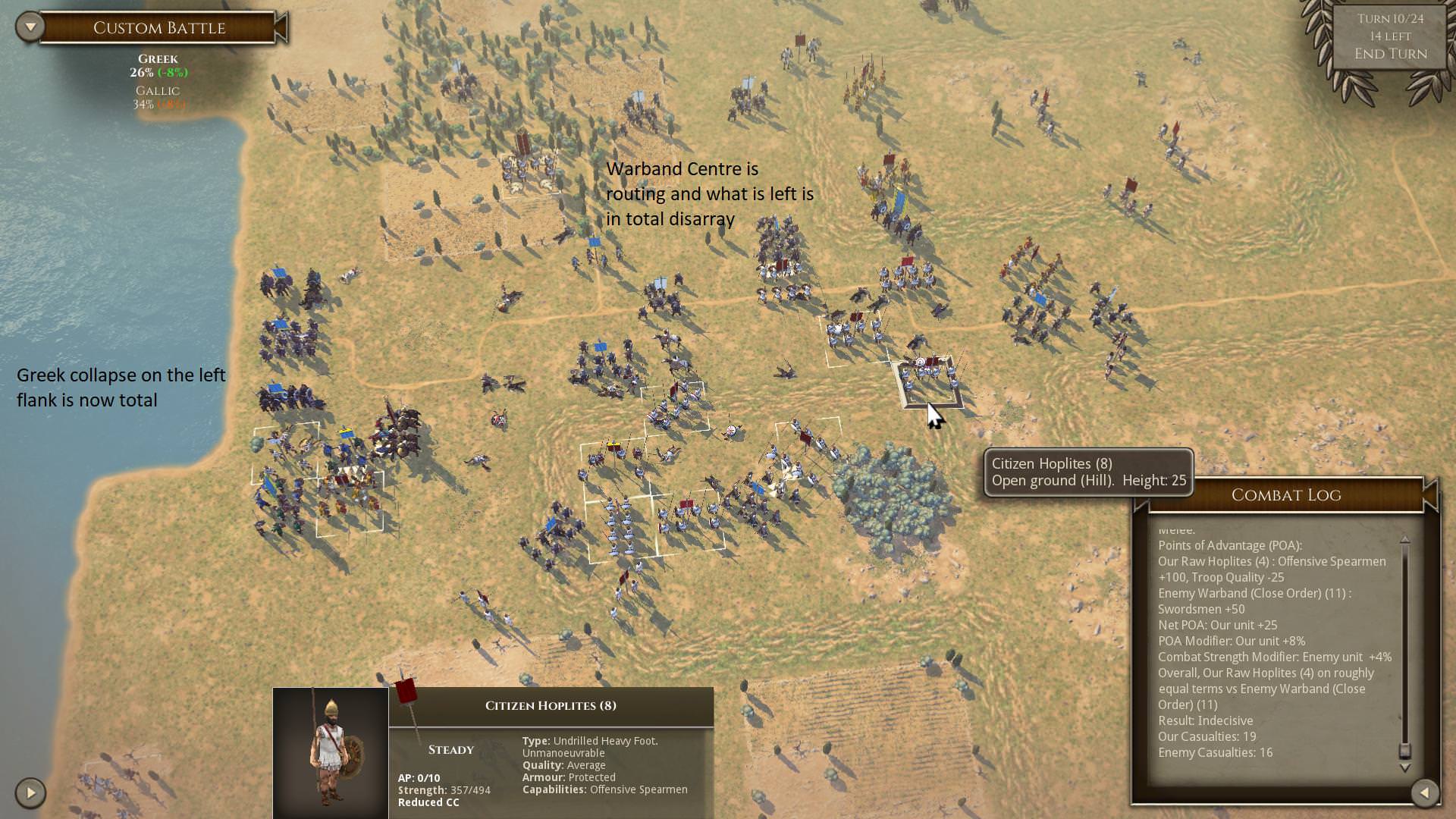 But their sacrifice allowed the turning maneuver to do its work and the Barbarian centre is now in the process of routing. The battle for the centre was not without incident as several Citizen and Raw hoplite units broke and ran but judicious use of reserves and ignoring Warbands that got through until they managed to turn around allowed the Greeks to concentrate force in breaking Warband units that could did not manage to win the Impact charge rounds. Barbarian cavalry belatedly tries to slow the rout but there are just too many Greek spears. 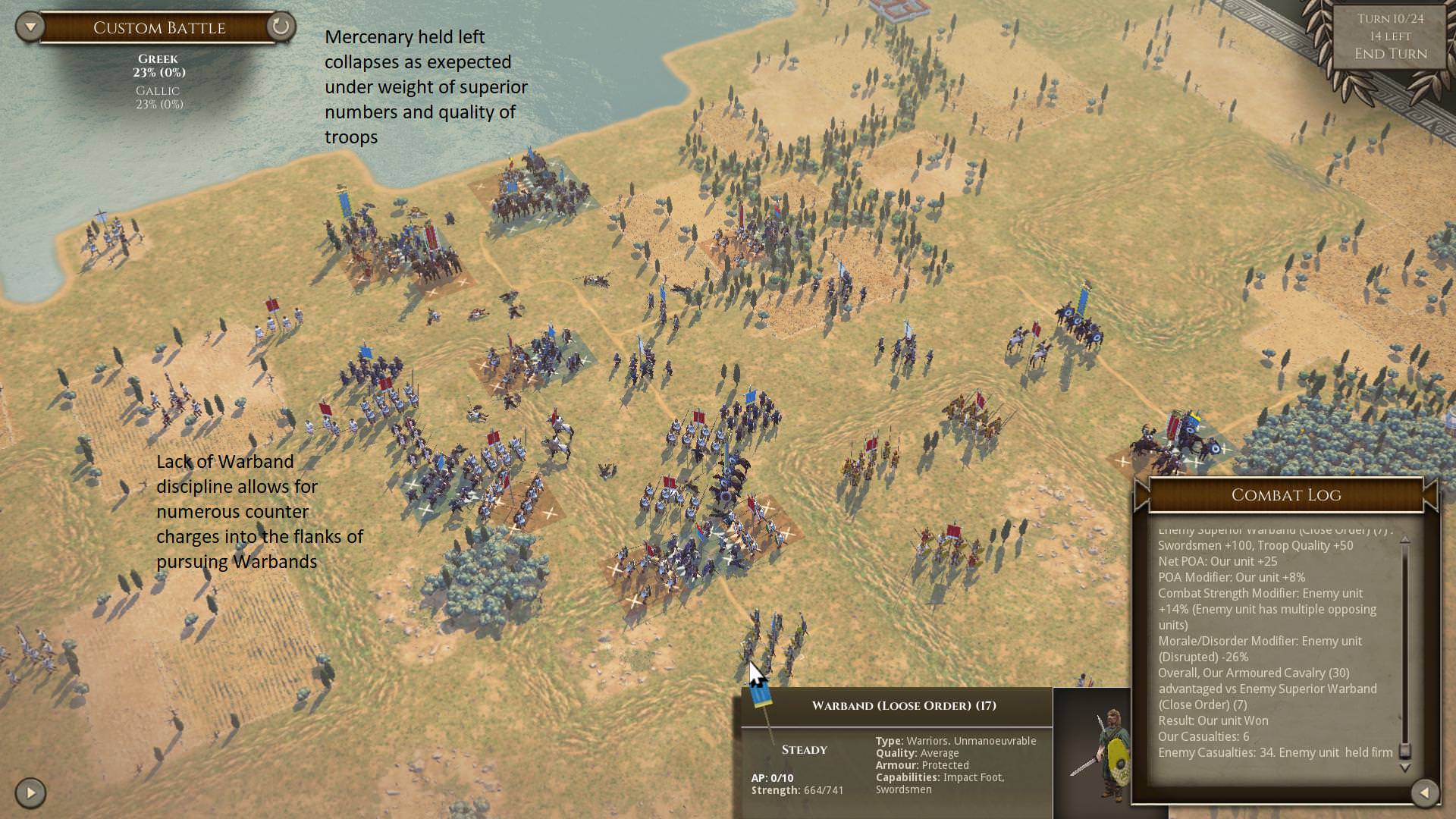 Stubborn warbands that held or those that broke through the line and got turned around are now dealt by superior numbers from all sides. The enemy chieftain actually got really lucky. I managed to flank charge the enemy general and disrupt him when his unit chased a fleeing Hoplite unit. Had a reasonably good chance to break him but he managed to rally his men. 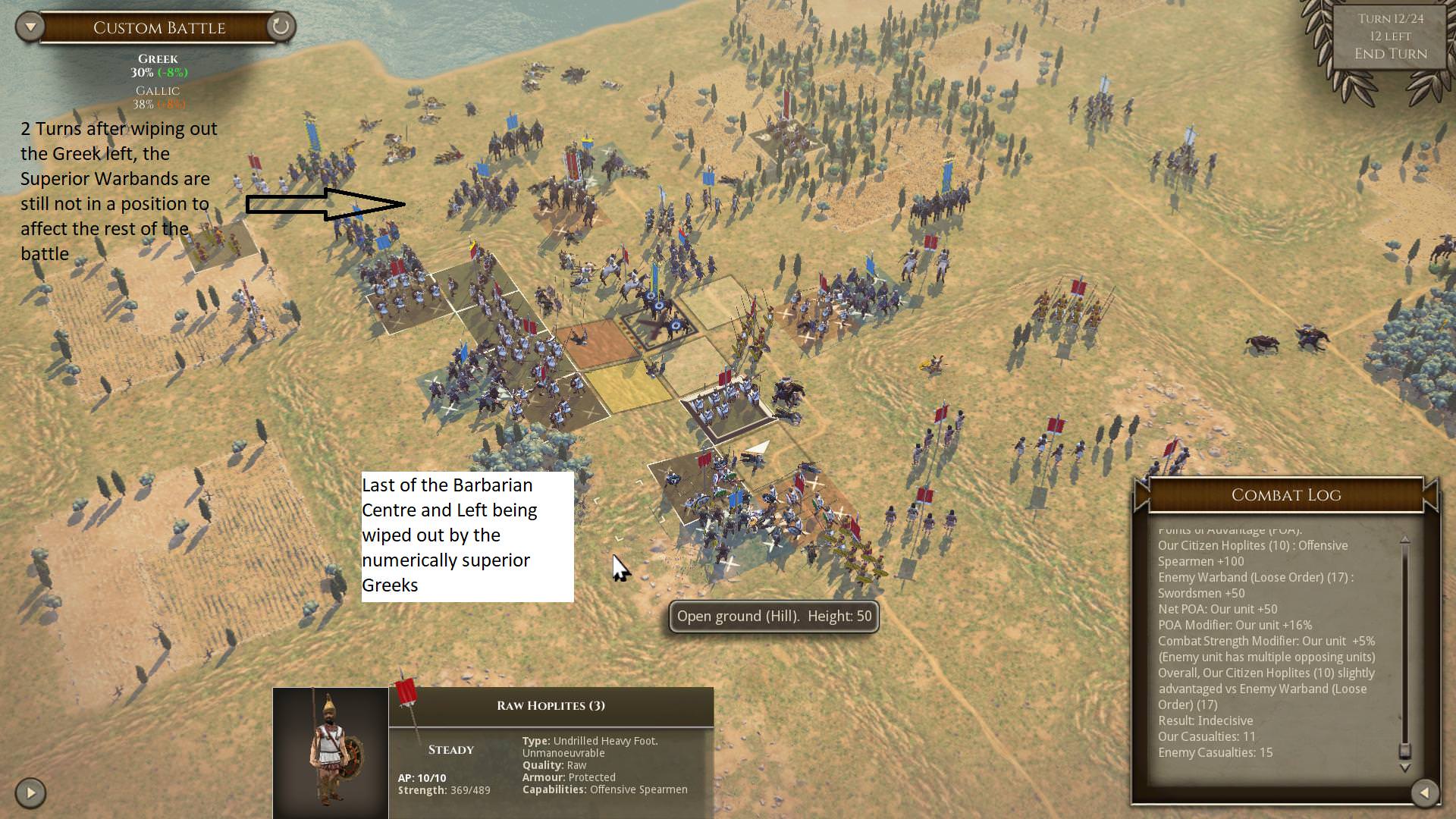 Unseen is the General of the Greek right flank routing enemy Barbarian Cavalry. The Warband who chased on the Greek right finally gets into the fight, but is fallen upon by multiple Greek Hoplite units from all sides. Warbands on the Greek left have still been unable to regroup and mount an attack to save what is left of their centre. The Greek C&C finally finishes the Warband unit that he has been forcing back for mulitple turns and begins to turn around. 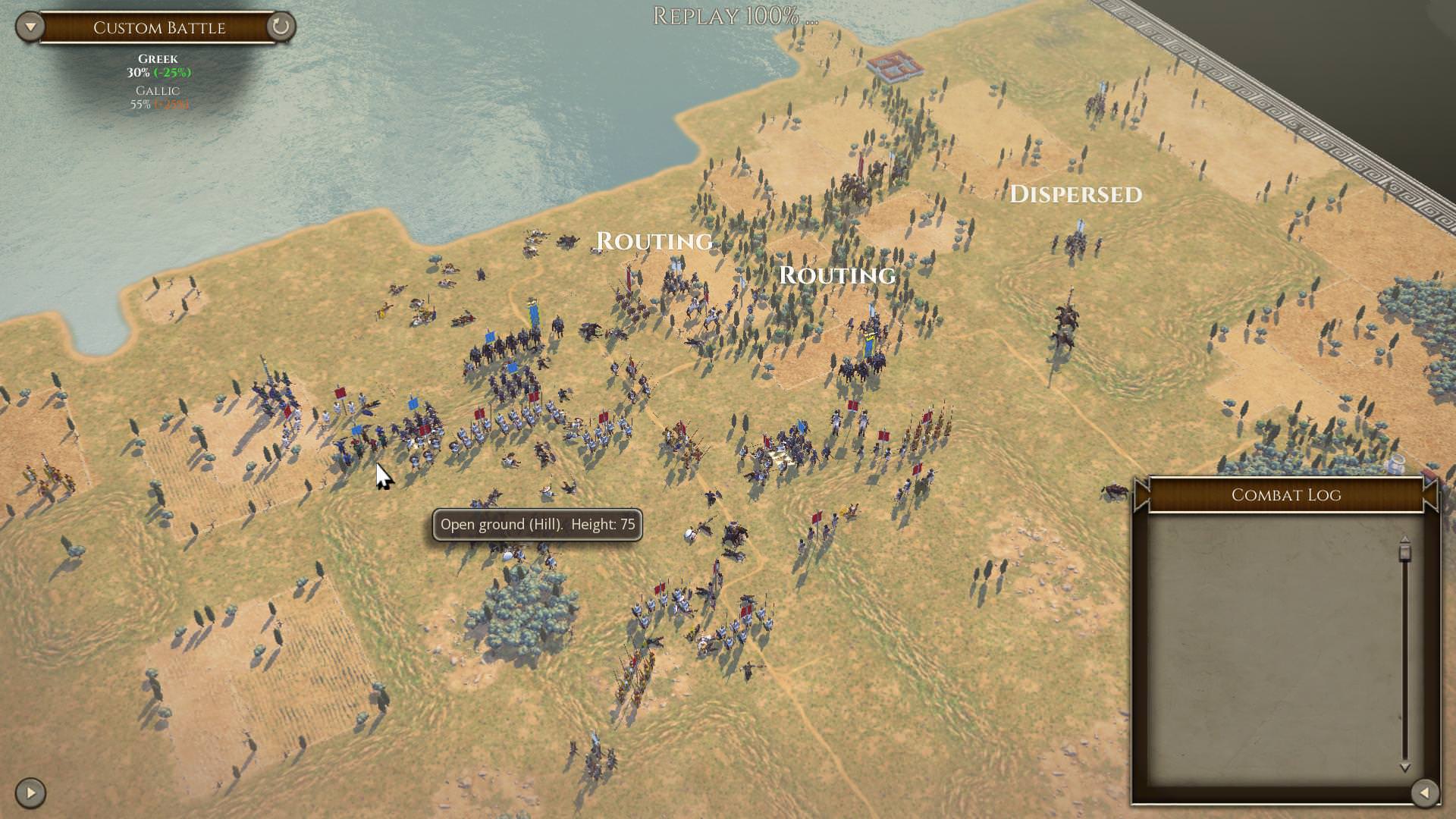 The Barbarians lost heart and gave in. Greek Hoplites emerge victorious. Even should the battle of have continued, the Greek Centre has reformed to meet the Superior Warbands. While it was unlikely they would win, the Greek Right had crushed all remaining resistance was was prepared to come to its assistance. In addition the C&C and the General of the Greek right were already pointed the right way and rapidly closing in to any areas of active fighting.

This is was just one battle and by no means a "final word" on balance but it does demonstrate how expensive the Warband army is and how many opposing non elite infantry armies have large numbers of units they can bring. Their lack of discipline and maneuverability also make Warband armies painfully slow in reacting to changes in the situation. Unlike Roman armies which can be quite small compared to their opposition, they rarely chase routing enemies and as long as they can keep their General bonus they are far better suited to rapidly turning and deal with changing conditions.
FoG 2 Post Game Analysis Series on Youtube:

Return to “Field of Glory II: After Action Reports”