Yes, you can join. just send me your orders in the next 24 hours.

If you are ok with Antigonid that would be balance the geography better and you will border several neutral zones. You can select either Antigonid OR Greek. Kappadocia will also be a human player FYI but immobile the first turn.
Top

(I) Victory conditions should be controlling 1/2 the total provinces, or all opponents resign.

(II) A player with a mix of army types either by era or faction (by building on conquered provinces) may select any of these for battle BUT must choose the majority typeby faction and era. So, if 2 greek, 1 roman, then Greek. If 2 greek (500bc), 1 greek (100 bc), then its 500bc.
Top

All right then peasants... oh wait thats me....

.....time for you all to die horrible long lingering deaths, especially you Roman sucktards who wish to enslave everyone, workers unite, free us one and all the slaves shall rise from the ashes and be equals once again

* 2 battles for everyone that submitted a turn (no turns from Spain, Rome and Etruscan). If you missed the turn your province will still build, so not the end of the world.

* The Neutral battles were assigned only to players who submitted turn by AsiaPac location first, and then geography in the game itself (where I tried to put nearby players in as neutral). If you can't play for some reason please let me know and I'll substitute.

* Attacker sets up the battle in PBEM system. State whom the game is for to avoid confusion. Use the force size table on forum post. Defender should be Side A.

* When ATTACKING NEUTRAL PROVINCES, attacker chooses the defending army when setting up the game in PBEM.

* IMC and rexhurley both invaded JEWISH (46). Najanaja will play Jewish on both sides. If both win whoever gets the higher break percentage gets the province, and the other army automatically returns home.

* CunningCairn and IMC cross attacked and MEET AT THE BORDER. CunningCairn gets 3x armies on 49 calculated as: (1) attacking army; (2) 50 army moved into and defending province 49; (3) 49 build army.

Thanks. Challenge up from Ironclad (Germania) for Ludendorf (Warlord of Gaul)

in the battles v the neutrals, which period army should we pick when setting up the battles? Jewish for example. There are three choices.

Open to anyone (not sponsored or affiliated with Byzantine games or Slitherine).
Multiplayer battles rules (map size, army size, etc.) are the same as in the sponsored tournament

NOTE: Players are expected to resolve 1 or more battles in a 4 day period, and to submit strategic moves in a 2 day period. Slow players (persons that make 1 move per day or so) should not join this campaign.
Strategic Campaign Map (attached here)

Factions to choose from:

Note: There are several black boundary lines on the map that divide Rome into 2 provinces, and the Med into 2 sea zones, etc.

* Each player starts with 2 provinces as reflected on the Strategic Campaign Map (except Slave Revolt with 3).
* Each province starts with 1 army of its province type.
* Each province automatically produces 1 army per turn (unless conquered in that turn).
* New army produced in that turn defends the province.
* Units move 1 land space on the strategic map (will be colored counters placed on the map).
* Units may move out to sea in 1 turn, and may move to any land space bordering that sea space in the next turn, no naval battles. Sea spaces are North Sea, West Med, East Med, Black Sea.
* A conquered province may build EITHER local province unit or base unit of the player.

* When a province is invaded, the invading army fights the defending armies 1 at a time, in sequence. If the attacker wins, that eliminates 1 defending army. If there are 2 or more defending armies, then the a new battle is initiated as each defending army is defeated, or likewise with 2 or more attacking armies.
* A draw of any kind results in BOTH armies eliminated.
* Attacker sets up battle in FOGII multiplayer with Pot Luck map.
* If armies meet at the border, then either player may set up battle (first in time prevails).
* Slow play (of any kind) results in DEFEAT for the ENTIRE force at the end of the 4 day Tactical Phase period. If you encounter slow play take a screenshot and send to the moderator with the next Strategic Move Phase (see below). If both players allege slow play, then moderator will adjudicate based on screenshots submitted. It is presumed that players will make multiple moves per day.

* Alliances are encouraged between players, no holds barred, but winner takes all (no joint victory).

Strategic Move Phase (every 2 days)
*Each Player sends by PM (to bbogensc) moves and build for each province controlled, e.g.:

Attacker chooses the era for the neutral.
Top

Kabill experienced a technical glitch so ive allowed him to submit the move an hour late. This resulted in an additional battle in Iberia as follows:

2 more players wanted for Syracuse and Kappadocia. Both auto built the first turn and were not attacked.
Top

Is there an updated map somewhere?
Top

No, not yet, I will make an updated map once the battles are concluded to be used for planning before the next strategic move phase. Right now I don't know where armies will end up, so I think it makes sense to update the map once per turn.
Top

We need a new Roman player for the tournament if anyone is reading this and wants to join with a good faction.
Top

Persia captures Armenia 44. Attacking army lost due to casualties, however. 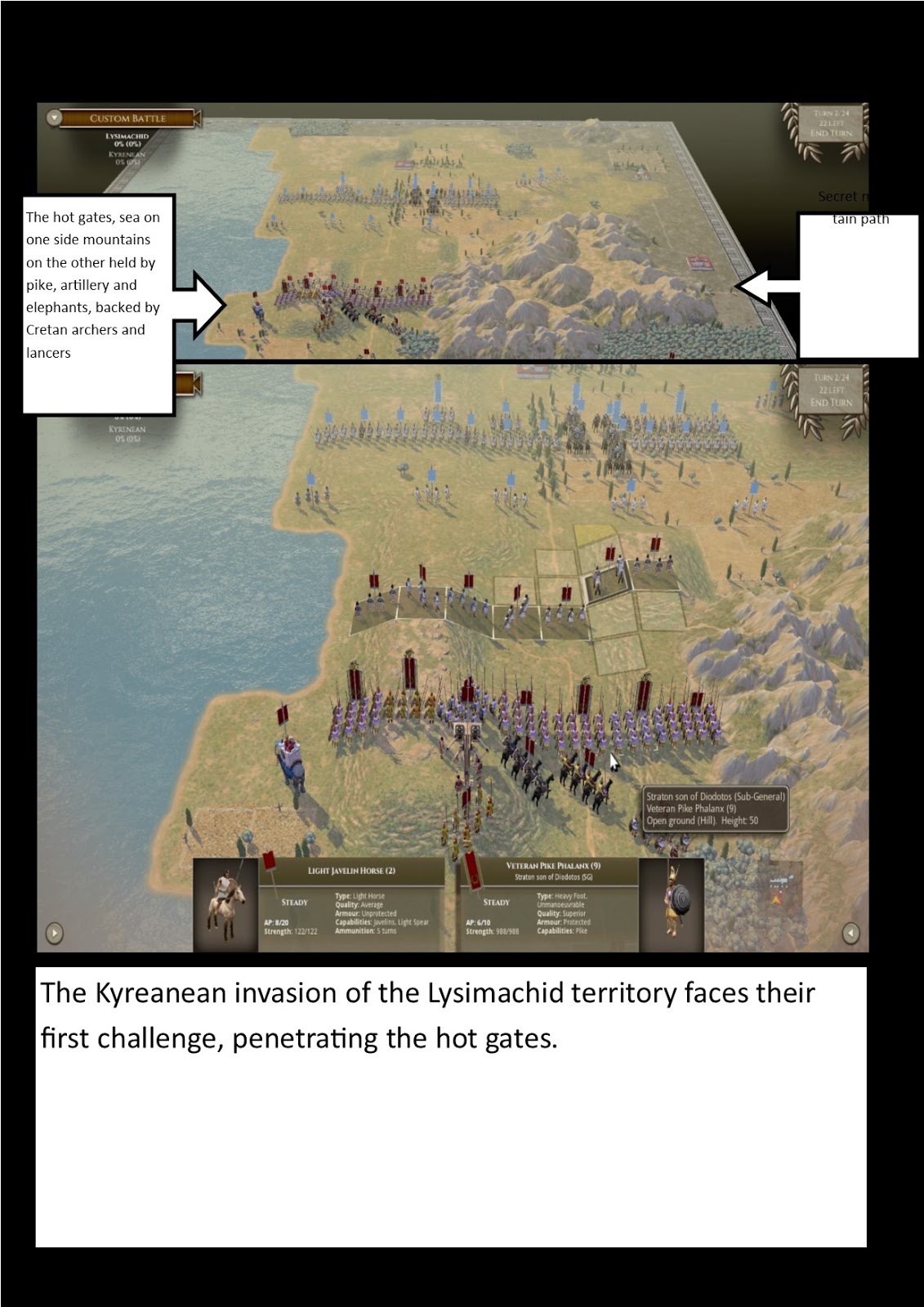 A tough challenge faces teh Kyreaneans if the want the Lysimachid territory.
Top 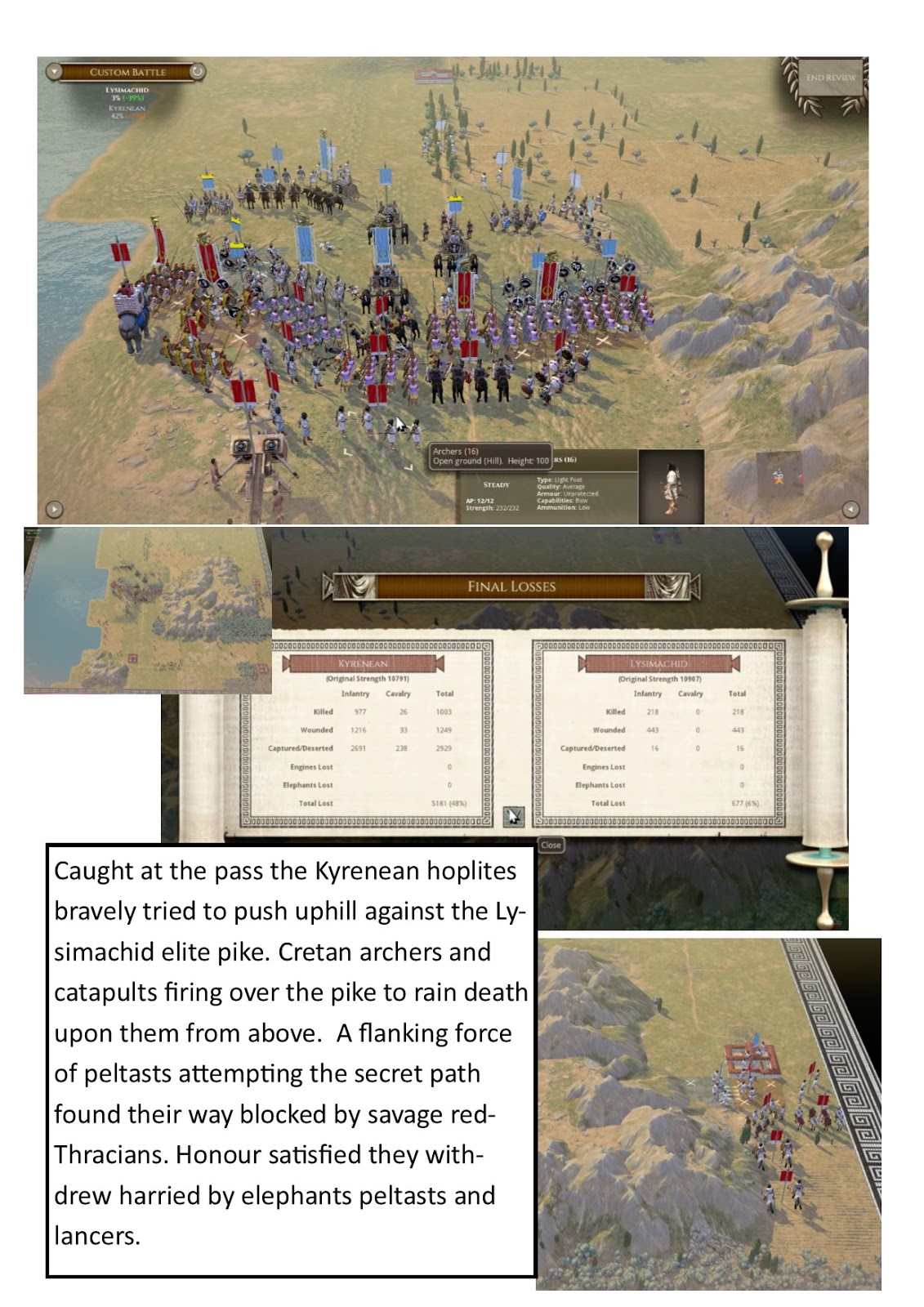 Kyreanean bravery was not enough this day. They fought with and for honour, before withdrawing while the nobles charged their stone and arrow battered chariots into the pikes to cover the retreat. Chased by lancers, peltasts and elephants as the savage thracian flanking force, that meet the kyrenean peltats in the mountain passes, rushed envelope their entire army.
Top 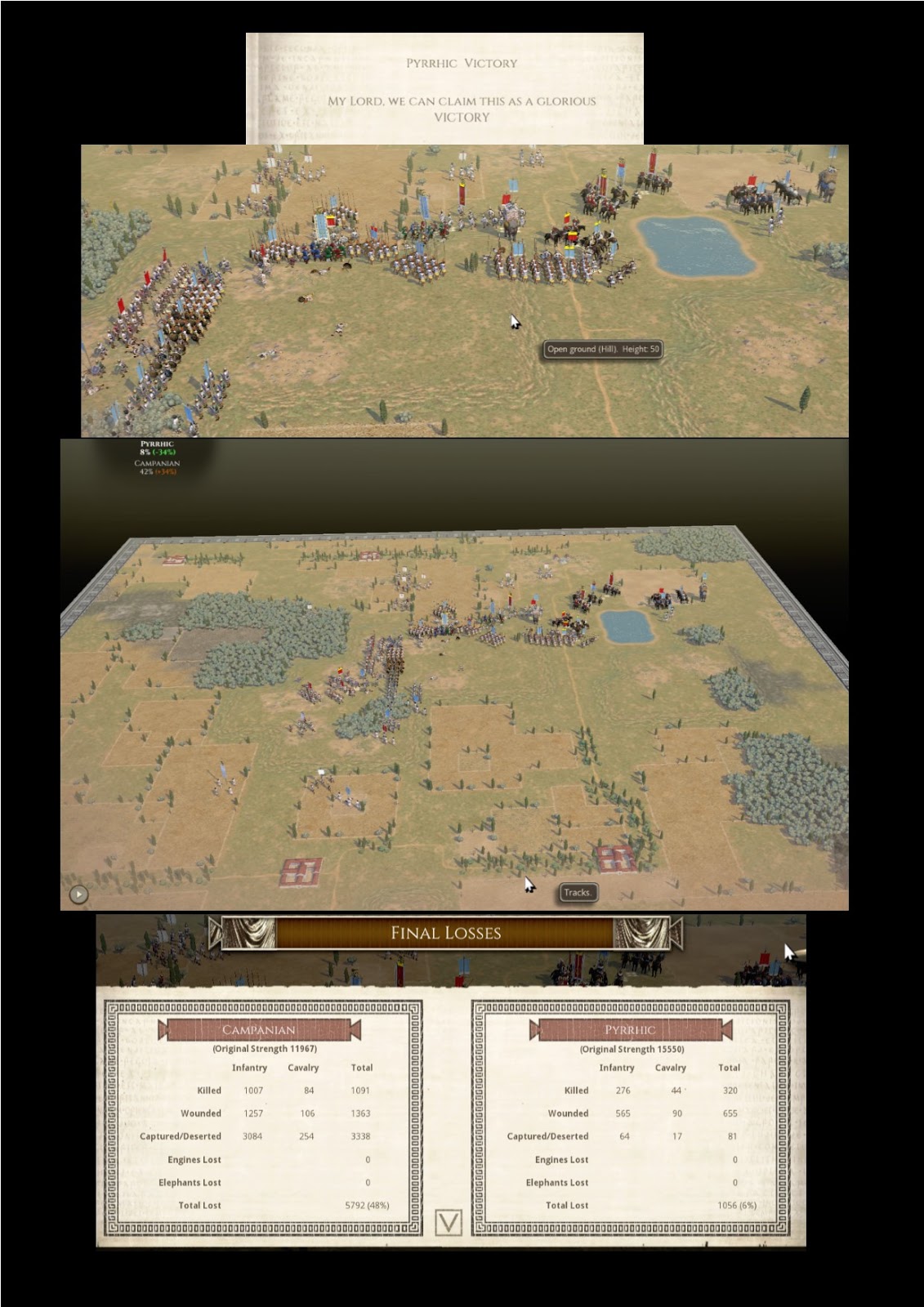 The forces of Pyrrhos push north into Campanian territory, outnumbered the Campanian hoplites stood firm luring the pike into an ambush by their italian foot emerging from the woods to hit their flank while the famous Campanian cavalry sorely tested the greek cavalry. But with the aid of elephants on the right, while hastily redeployed Pyrrhic italian allies to shore up the left, the epirot pike used their greater numbers to push through the centre and on to victory. Pyrrhics losing 6% of their force. In a 2:1 claiming victory and
Pyrrhos claims 19 as a new territory
Top