bbogensc wrote:Yes, good questions. I hope that I did cover this in the rules. ... The land bridges are covered in the geography notes. Bosporus does connect. Gibraltar does not. Sicily does not. These were gameplay decisions to try to balance the map for starting positions.

You covered this, my bad!

And you can still fight for the Neutrals.
Top

* Most players have 2 battles, a few have 1 or 3. I assigned based on proximity in the actual game this round as the top priority, so I expect some of the games will run the 7 days due to time zone differences.
* Please let me know if you are assigned a neutral battle and cannot play and I will re-assign.
* Attacker sets up the battle in PBEM (and notifies opponent).
* Defender Side A, Attacker Side B. Note the force size table in the Instructions for larger size battles.

Note: gamercb could trigger additional battles with his turn in which case I will update the list and send a PM to anyone that may be requested to play neutral. Also, paulmcneil please send me your moves and builds. Both still have roughly a day to send in the turns. I have the rest of the moves and decided to go ahead.

CunningCairn Ptolemy (320BC to 167BC) OR Nabatean ATTACKER CHOOSES

Re: Note on Terrain


In one of my divisions in the FOG digital league, i swept my division playing a list of predominantly Medium scots irish infantry. I did develop a doctrine (which i shared with Mick C ? for his tiered list but he hasn't posted it yet i believe) but I am NOT an expert player. I think in many cases, the mobility of the chariots and staying power of a Med force, as an army, not individually, and with a core of superior troops, was underestimated by many of my opponents. the heavies charged in and as the my med broke or fell back, flanks opened for envelopment by chariots or ample reserves. This was the way I won in many but not all. A medium list without mobility or quality needs terrain i think to hope to prevail, but with mobility and quality i found a med list very flexible. I am playing the knock out tournament as scotts in the hopes of getting far enough to see how one of you expert players defends against a mobile horde

I think refused flanks and central reserves are critical when playing against a medium army. Those heavy infantry are usually outnumbered, so they need to have a plan for that. Something needs to follow the heavy infantry through the initial pushback, and the heavy player needs to anchor his or her flanks as securely as possible.

That said, it's not always possible to stop a well-placed medium reserve from flanking your heavies. If the pushback happens on the enemy's phase, they'll get a chance to outflank you as you drive through, and there's nothing your central reserve can do about it. You can at least follow up and attack the flanking unit; you might even save the breakthrough unit.

Impact foot are particularly good for warding off flank attacks if used defensively because they are scary to charge in the first place.

As for mediums on terrain, this is where having skirmisher superiority is important. If they won't come off that annoying piece of rough ground, shoot them until they have to. Alternatively, go attack something else and make them move that way.
Top

I agree with you both 110%. I played the Indo Greek as a medium infantry force as well. After playing 9 league matches I was no longer even recruiting the 2 pike.
Top

An army of Galatians has marched through the mountain passes that guard Italy, subduing local Umbrian communities. Despite rear-guard efforts to hold onto key areas of the region, and a spirited marshland ambush in which some Galatian warbands were put to flight, Umbrian resistance was ultimately crushed. The Galatians, who are more disciplined and organised than their northern Gallic cousins, now hold the gateway between Italy and Gaul. Umbrian refugees and dignitaries flock south towards the coast, where fighting continues.
Top 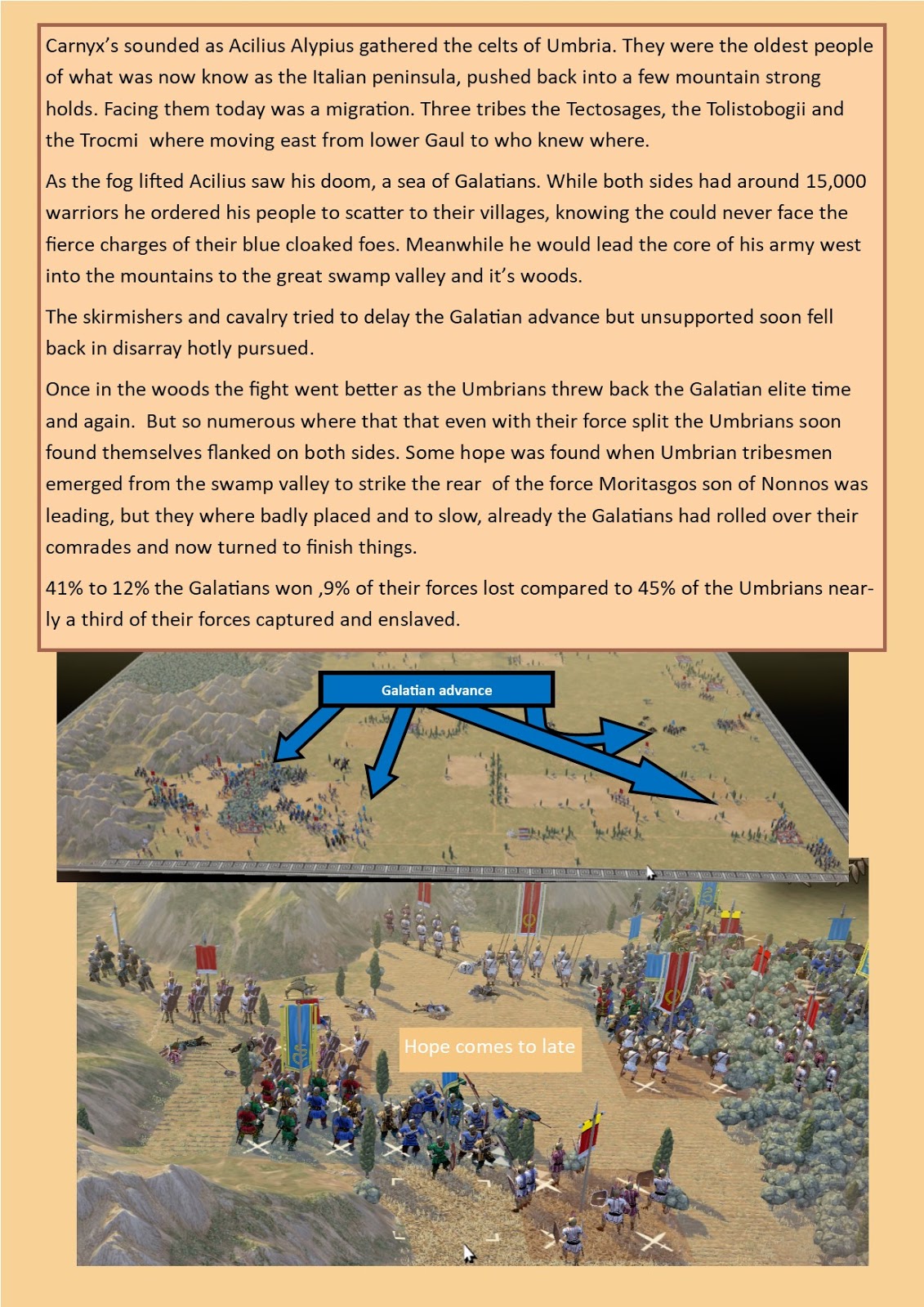 I decided to do an AAR as well after all. Umbria has fallen.
Top

Can't you just manually adjust it in the advanced options?
Paul McNeil
Top

Yes you can an I did so for my fight vs. bbogensc. Still i think specificity would be good and suggest that map sizes be added the force size info for clarity. (plus a note that they can be adjusted in the advance options)
Top

fun reads, keep them coming. Perhaps i will try to find my muse to do one myself.
Top

nyczar wrote:Yes you can an I did so for my fight vs. bbogensc. Still i think specificity would be good and suggest that map sizes be added the force size info for clarity. (plus a note that they can be adjusted in the advance options)

You are right, of course. Somehow I totally missed it.
Top

The horsemen of Germania achieve their first victory and secure Skythia.

Both cavalry armies were disadvantaged by a reduced (medium) battle area resulting from the sea combined with extensive woods, which in the end proved more detrimental to the lighter army facing tough German heavies with plentiful light support. Thanks Paul for the game.
Top

Pyrrhic victory 10% to 40% or 8% to 48% casualties taking area 12 and Pyrrhic brute force and numbers over came the subtle maneuvers of the Campanian medium foot and cavalry. 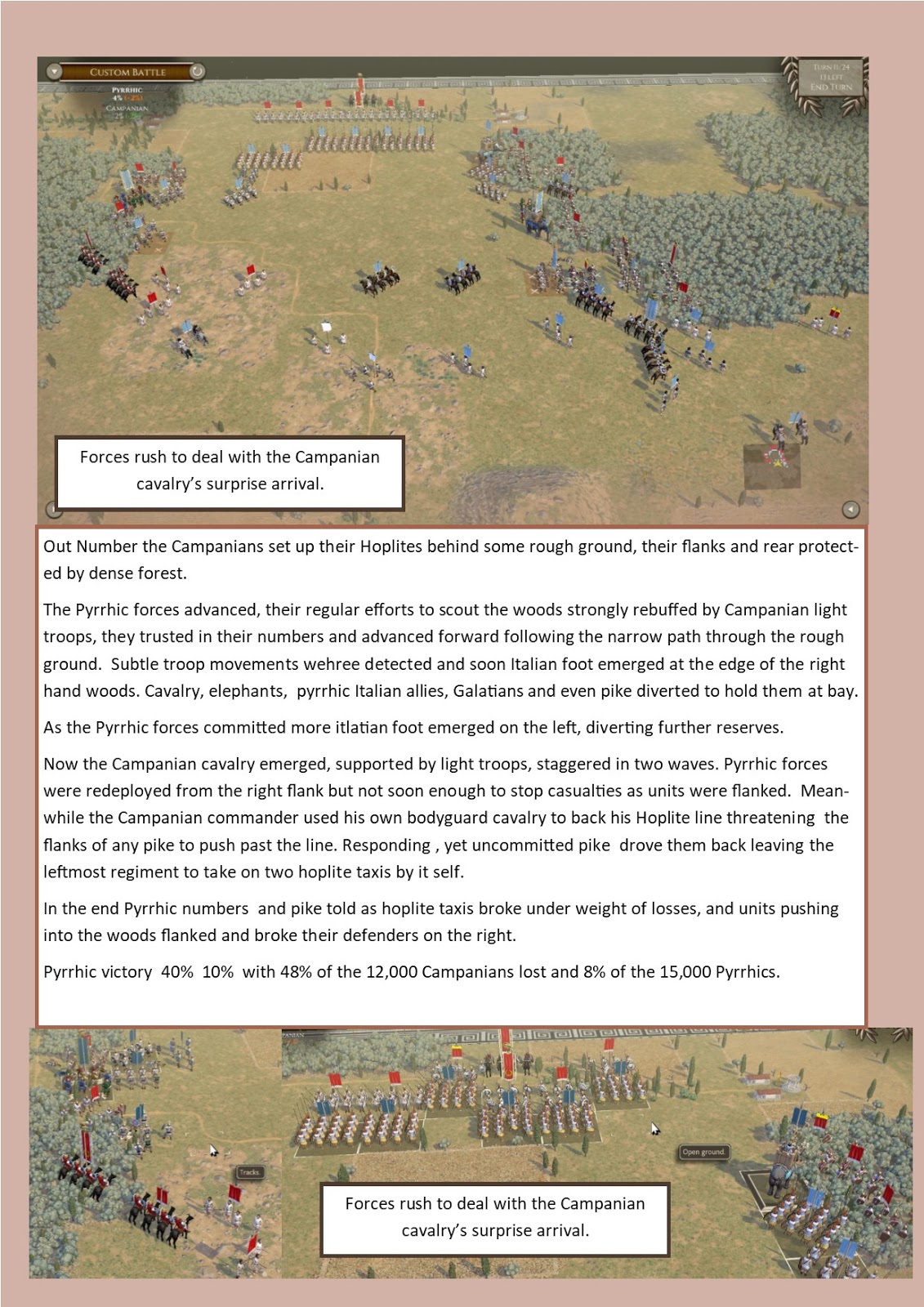 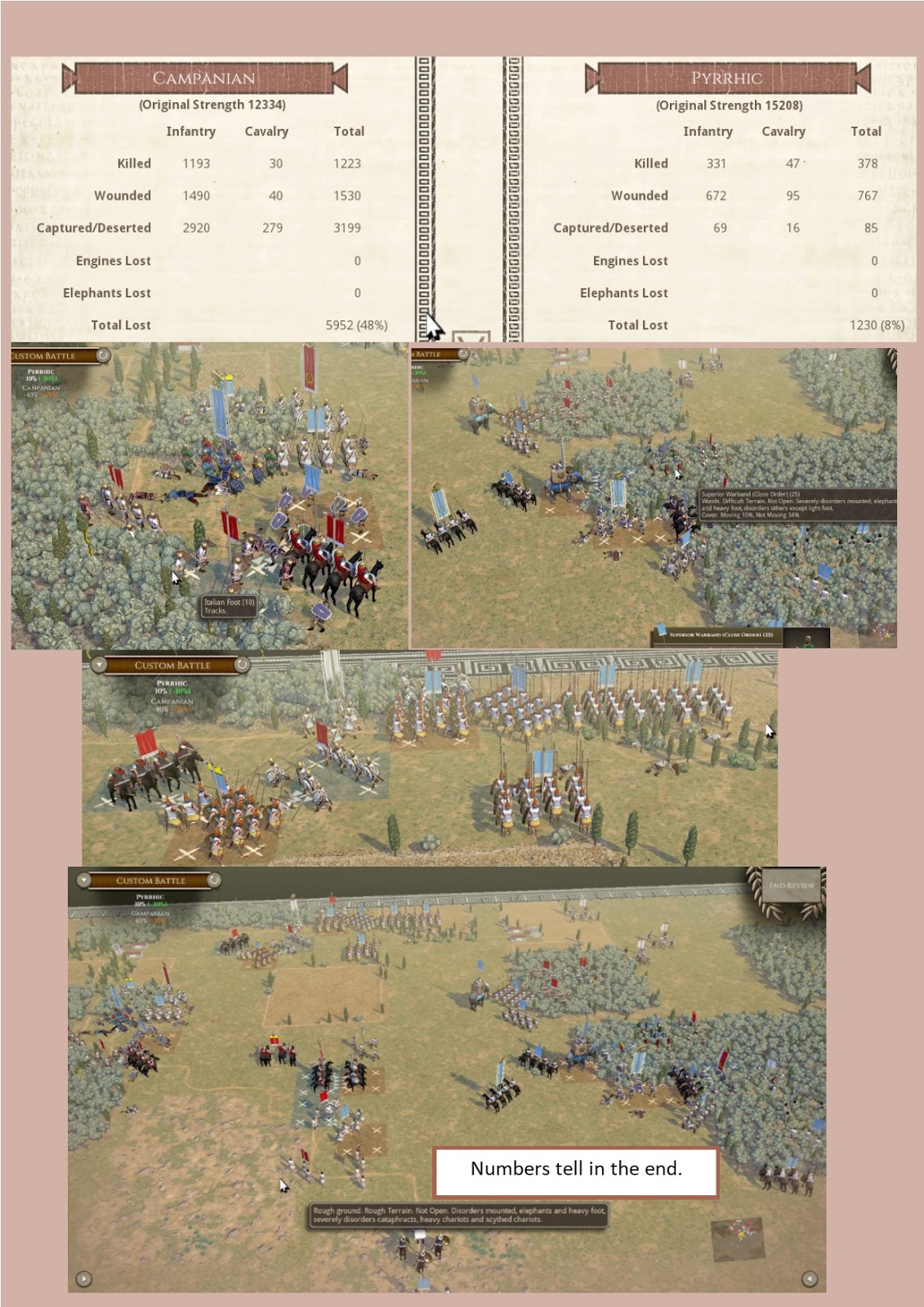 Rome (nyczar) has conquered the other province in Umbria. The demoralized Umbrians were swept off the field (58-4) by the roman formations sustaining minimal casualties in the process.
Top

Iberia once again proves a stubborn target for Spain. Landing by sea, the Spanish army advances up the coast at speed, drawing off a part of the Iberian force. Arrayed, the Spanish attack with confidence, gaining early dominance on their left flank and moving reserves to hold while the main force looks to close with the core Iberian infantry. The initial Spanish assault is powerful and dissolves the Iberian line, but an ambush sprung from a thin line of woods on the right flank causes a panic in the Spanish ranks. Meanwhile, the holding force on the Spanish left fail to press their advantage and a cavalry reserve pushes past the main Spanish line to attack them from the rear. On a knife-edge, with troops scattered across the battlefield, both sides fight fiercely, until the Spanish finally move into position to vanquish the Iberian ambushers. But, as they prepare their final charge, one of the core Spanish warbands is panicked by routing cavalry and, attempting to withdraw to a secure position, loses its nerve and puts them to flight.