A mix of deep gameplay and rich historical flavor, Aggressors: Ancient Rome lets you relive history as the ruler of one of the mighty civilizations of the ancient Mediterranean. Choose one of twenty available factions and conquer the world.
Post Reply
11 posts • Page 1 of 1

I am a huge fan of 4X strategy games. I love the whole idea behind it: you start as a small nation which slowly gains the respect of others, you see your economy grow, you advance in technology, build an army… You watch your empire rise and you develop an attachment to your own people. You care about them. If your country is invaded you literally feel betrayed and in danger because you know your people suffer.

On the other hand, I have always liked tactical games like Panzer General where you don't command small units but have a full control of your army. You are in charge of all the important aspects of a military campaign from a macro level. 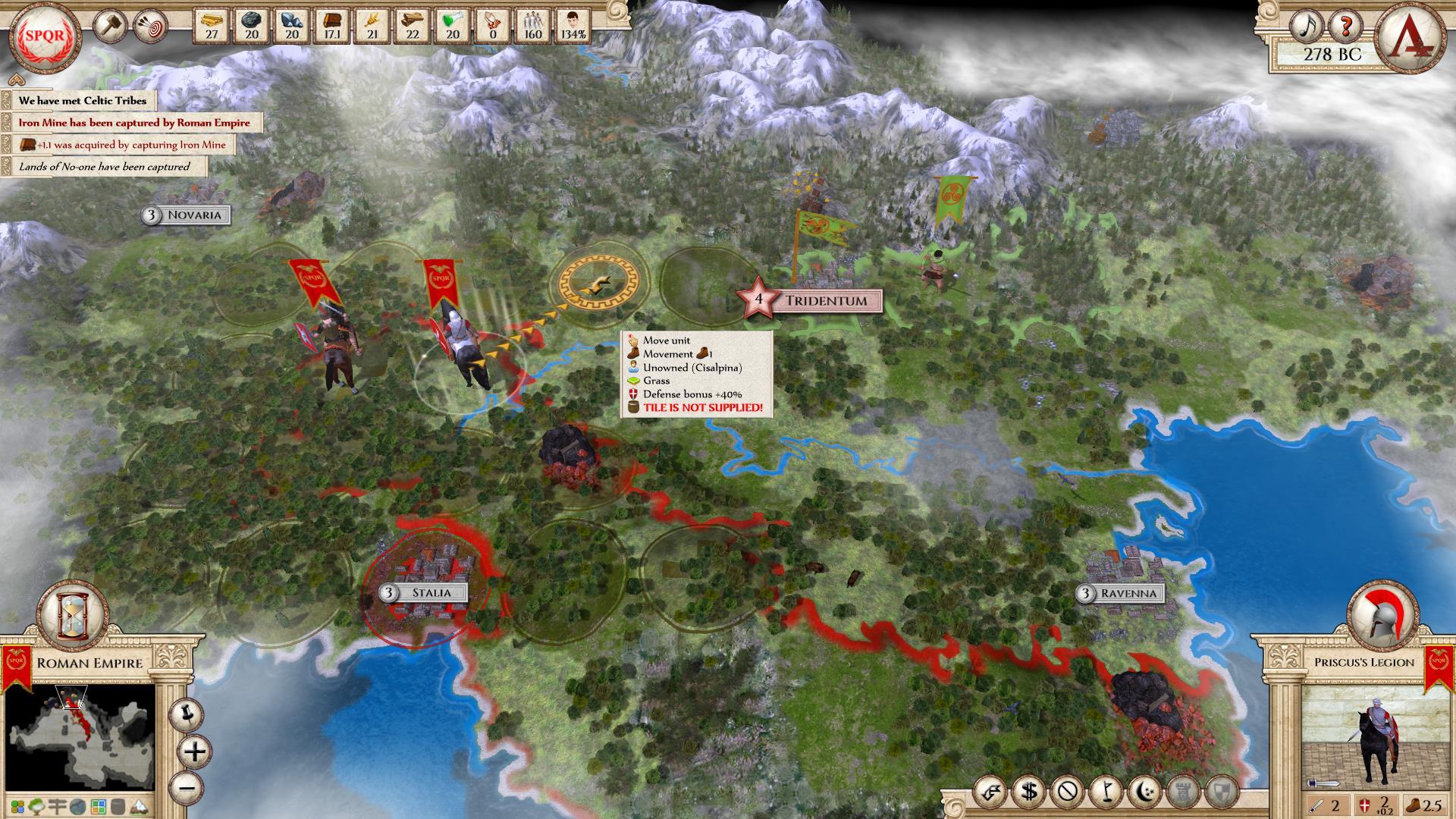 Being an emperor and a general at the same time - that was what I wanted to achieve when I started the development of Aggressors. In my mind, Aggressors should be a simulation of a real military campaign with the need to balance realistic aspects like supply management, loyalty, army morale, soldiers attitude and other threats like starvation or desertion. Overall, there are many different factors you need to take into account when planning your military campaigns in Aggressors. Remember, winning battles is important but, in the end, you need to win the war. 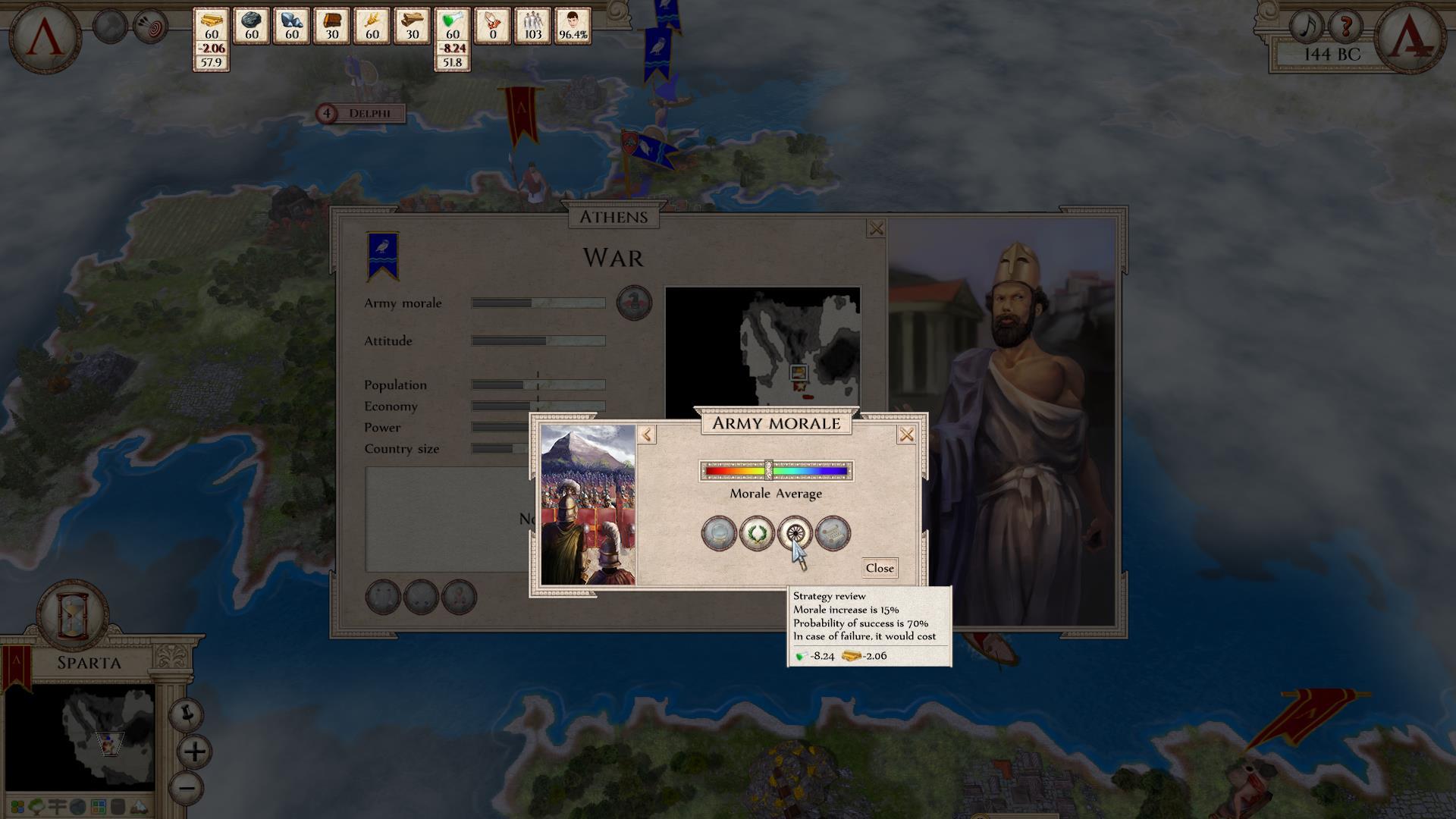 Army morale was one of the concepts that has been there since the very first design document as one of the main factors determining the outcome of battles.

The pride, courage and readiness to fight and die for the nation and its leader was prized above all else and played equally decisive or even more important role in the battle outcomes of the period than quality of arms or sufficient supplies. Minor incidents that were out of the commander's control could have devastating effects on the morale of the armed units such as bad omens or a negative prophecy.

However, the army morale was also very much dependent on what enemy the units faced and the history of mutual conflicts. The Roman Empire conquered Greece relatively easy but Germania became Rome’s nemesis. And it can be argued that part of this desperate war against Germanic tribes and the inability to reach a decisive victory was also affected by very low army morale when standing against the feared barbarians. Romans felt themselves superior to Greeks and the army morale of units on Greek front was high but the same cannot be said about Germanic tribes. 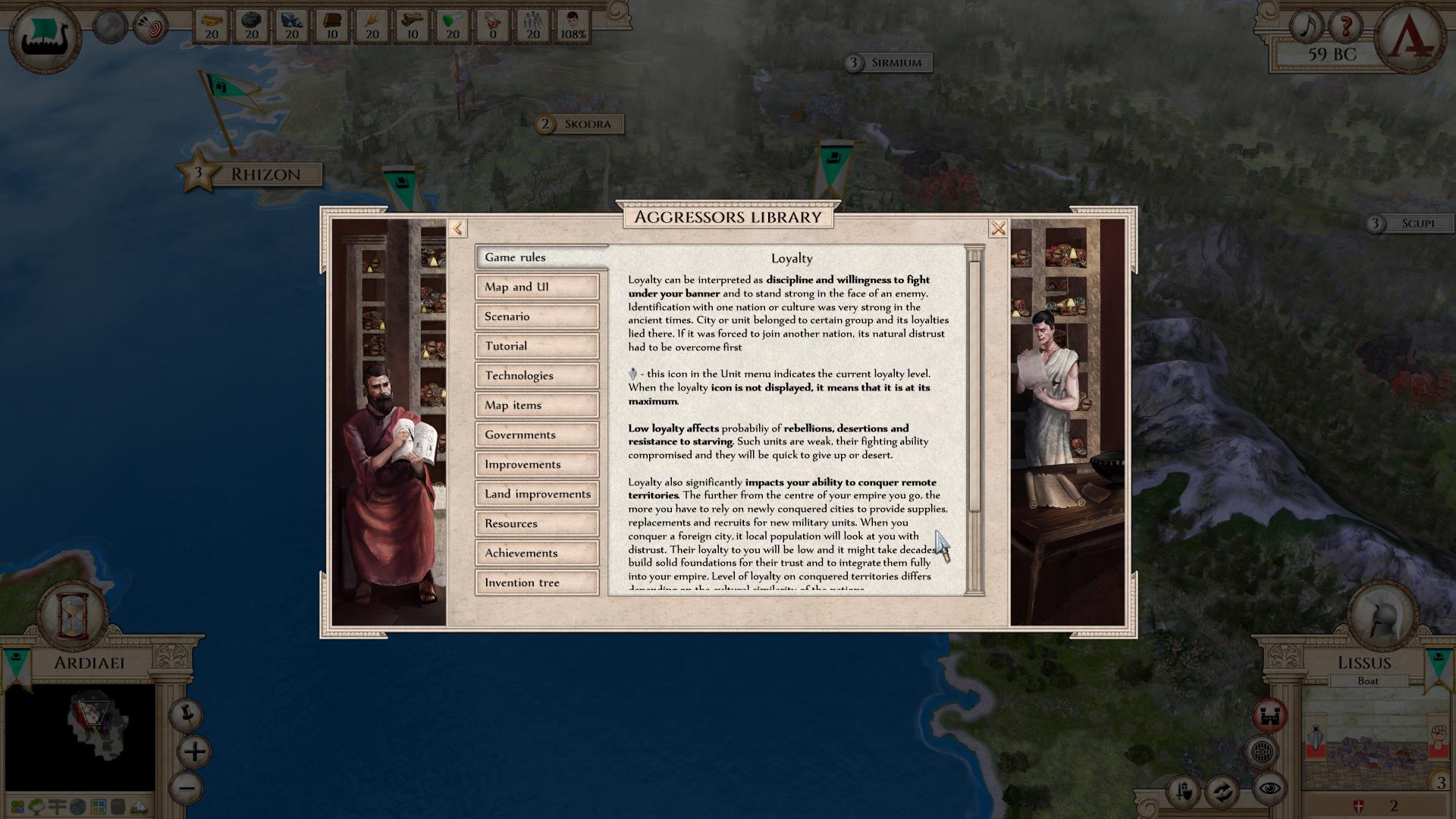 Army morale also changes depending on previous battle results against a specific opponent. Every new tile and territory taken, every mine or city conquered significantly impact armies on both sides. Defeated units will lose courage and willingness to fight which compromises their fighting abilities. The supreme commander has several tools at his disposal to boost the army morale of his units. He can employ an oracle to make a prophecy, hold a motivating speech, use propaganda tools or review enemy tactics and make new battle plans. And, in certain moments, State decisions also might come handy, but this is for one of the next dev diaries.

In history, stable and reliable supply lines played an extremely important role as traveling both over land and over sea was time-consuming and risky.

The success of any military campaign was dependent on how well supplied with food, armaments and other essentials the advancing units were. Incorrect supply planning could have been the proverbial Achilles heel of any successful offensive.

I wanted to translate this important part of military planning into the game and reflect in the design both the distance to which the supply lines have to stretch to reach the advancing units and their safety.

There are so called "suppliers" in the game such as cities, naval units or wagons that can store and carry supplies to units on the battlefront. The efficiency of supply lines depends on the terrain and the possibility to use roads. Based on these factors a so-called supply area map is calculated.

If a unit advances too far and gets outside of the reach of the suppliers or if the supply line has been broken, the army morale and strength of the unit deteriorates with every turn. If the situation does not change fast, the unit eventually starves to death, deserts or is disbanded of its own accord.

Desertion is a threat you always have to be careful about. Fighting men are under an extreme pressure and not enough supplies or fear of the enemy can have a serious effect on their willingness to fight, and then you might face massive desertions.

The idea for one of the features implemented later came from playing the game. It often happened that a player conquered an enemy city, repaired it in few turns and immediately used it as for recruitment of new units. But in reality, civilizations that inhabited the Mediterranean region were very different and it would be wrong to think that they did not feel any pride and loyalty towards their roots, culture and nation. It usually took decades to pacify conquered people and have the option to recruit them to your own army, and even more so to trust them that they will not run away in battle..

When Romans conquered Germanic or Celtic settlement, they could hardly hope to immediately start recruiting capable men, as tribal warriors would either refuse to fight under a Roman banner or desert at the first opportunity. Relying on them, even as mercenary forces, was very risky and it could jeopardize entire campaigns.

I wanted the historical reality to guide my thinking and so I came up with yet another concept - loyalty. It is an indicator as to how loyal the city or unit is to its new master and it is determined by the cultural similarity of the individual nations. If Romans took an Epirean city in the south of Italy, the loyalty of the city would be initially low (very few cities welcome conquerors) but relatively quickly the city would become fully integrated in the state structures and the people would put their resentment behind as they went on with their daily business. However, the situation would be much different in a Celtic city at the edge of Alps. It would take them decades to accept Roman customs and pledge their loyalties to the Empire.

Loyalty levels grow relatively slowly and it might take many years to reach 100%. Until then, the units recruited in cities with low loyalty are inferior to other units and it needs to be carefully considered if building such units is even worth it.

This concept brought the whole system of recruiting new units in the game much closer to the historical reality.

The features described here are just a part of those which have an impact on the battle itself. I wanted to describe first those which have an impact on the whole battlefront however there is another side of a coin – the tactical aspect of war. Starting from units’ own attitude and a long list of distinct improvements through the ability to defend or attack on particular terrains to special rules for defending military structures. But that would be a long story again so let's talk about it in one of our next dev diaries.

Get more information about Aggressors: Ancient Rome from its official product page
Top

Sounds great. I am really looking forward to this games future release.
Top

Very impressive!
Just let me in the beta!

Looks great. Really interested in how combat plays out. For me, that's been the real weak point in most 4x games.
Top

Dual_CoRed wrote:Looks great. Really interested in how combat plays out. For me, that's been the real weak point in most 4x games.

We will reveal other details about the combat in one of our next dev diaries so stay tuned!:)
Top

Just looking at those great pictures and the layout of the game, really makes me want to play it. I didn't get chosen for the first beta and maybe I'll get chosen for the second but has all the appearances of a great and fun game. I'll be after it when the time comes.
Top

If the developers can deliver on what is promised in the first 3 developer diaries this will be a defining ancient strategy game.
(Keeping everything crossed !)
Top

Hi
Sounds great so far. I have some questions I wonder about the supply system of the game, something I find most wargames fail to represent realistically.

1. Is supply consumption related to the size of the force? The larger the force the larger the supply consumption. Additionally, a large force requires a large supply train, the larger a force the slower it moves, especially if it moves with a large supply train, but the slower movements means it needs more supply rations to cover a given distance, all that combined meant there was a limit to the size of an army moving out of a supply source.

Hi Aryaman,
thank you for these suggestions. All of them absolutely make sense, especially for a tactical game.

However, Aggressors are looking at the world from a bit higher perspective. It is partially tactical game but probably more a strategy game.

Every turn is a year so it doesnt make sense to incorporate winter seasons for example. It also doesnt make sense (on this level) to count the size of the supply train. The supply map is more like an "ability" to supply units to a certain distance from the suppliers (cities, ships, wagons) in enemy lands. This should (and it does) count with terrain, accessibility (no roads available, dirt roads available, paved roads available), enemies on the way, etc., but doesnt (and it would probably not even make sense) to count the supply train size and speed (when one turn is one year).

I agree with you in all the points but the game works on a higher level where these nuances should already be "incorporated" in this generic view.
Top

Daniele wrote: ↑Fri May 25, 2018 1:17 pm However, the army morale was also very much dependent on what enemy the units faced and the history of mutual conflicts. The Roman Empire conquered Greece relatively easy but Germania became Rome’s nemesis. And it can be argued that part of this desperate war against Germanic tribes and the inability to reach a decisive victory was also affected by very low army morale when standing against the feared barbarians. Romans felt themselves superior to Greeks and the army morale of units on Greek front was high but the same cannot be said about Germanic tribes.

Okay, this is a head scratcher. First of all, the very word "barbarian" is greek in origin! The romans adopted this word, placing themselves and the greeks in one group and the Gaul, Spanish, etc. in an inferior category. Secondly, the roman conquest of Greece was anything but easy! The Romans spent 250 years sending consular armies (their main fighting forces) against the many greek kingdoms and made many alliances in the Hellenistic world to accomplish this.

Sorry if this sounds harsh, I think your dev diaries show some interesting ideas. It's just like... really not historical.
Top

Nothing easy about fighting the Greek style units, in the game, from my playtesting experience. In the context of what Danielle was saying - army morale - it's quite historical that the Roman soldiers would know what they were getting into, so had higher morale going against Greeks, than going against the barbarian hordes, who had quite a terrifying reputation, especially given that such a horde had just sacked Rome in 'recent' history.
Top
Post Reply
11 posts • Page 1 of 1