That was a fast victory!

That was a fast victory!

Bought this game yesterday and played the Pyrrhus scenario as Rome, on easy, because.

Moved my army to Taranto, met Pyrrhus on the way, a draw battle, movement continued to Taranto, where I won a battle.
Turn 2 I head back to catch Pyrrhus, this triggered another battle at Taranto, which I won, and there appeared a triumphant window announcing that I had won the game with 50000 legacy points. ???

And I thought this game was supposed to be hard

Well, I have some achievements now.

Anyway, I consider this a bug, or a special scenario glitch. And today I started a new Grand Campaign game as Cheruski to slowly discover all the mechanisms, and as a starter I have a couple of questions for which I couldn't find an answer yet.

- on my desktop I have two screens, and now map scrolling at the window border doesn't work. Is there a way to enable this?

- I switch regularly between my desktop in my game room and my laptop in my easy chair, so cloud saves sound great for me, and I have cloud enabled in the options, but the savegames don't show up on the other computer. How is this cloud option supposed to work?
Top

Sorry, if you are referring to the Clouds Enabled option in the game, it refers to the cloud visual effect high above the map, not cloud saving.

The saved games are found in My Games\FieldOfGloryEmpires\SAVES if you want to move them between computers.
Top

Either absolute noob or mediocre troll, either way had a laugh reading the post

No, there is a lot of room for improvement in the clarity of the options.
Top

So I played some turns as Cheruscii, and I have a game play questions:

- After a couple of turns of expansion to form the province of Magna Germania, a new nation, the Saxons, spawned directly on our Northern border to declare war on us. How does this spawning of new nations work? How is it triggered?

(By the way, I don't think the Saxones are a valid tribe name in this game. The reference by Ptolemy in the 2nd century CE is very probably a transcription error, and they seem to have formed later as a tribal coalition, like the Franks, not as an older existing tribe. But then, vitually all 3rd century BC Germanic names in Northern Germany are completely unknown, and tribal association seems to have been rather fluent throughout these centuries. Though for the Northern German coast Chaucii seem the largest group in the late centuries of this game).

The AI aggression is very high in this game. Is there some form of aggressive expansion effect?
The Belgae offered me a cooperation treaty after I expanded a bit, but the Marcomanni, which were not even bordering me, then declared war on me, immediately followed by the newly spawned Saxons, and then my friends the Belgae traitors also declared.

What makes it critical is that we cannot build the core heavy infantry units yet, so losses in your initial army cannot be replaced for a long time, until you have built the whole economy for these units. So one defeat by one of all those AI enemies means the end of the game.

I guess the starting moves are very critical for the Cheruscii. Do you have to play it very slowly? But all the (distant) neighbour AI's are also expanding quickly, so keeping small seems also without hope.
Last edited by springel on Tue Jul 16, 2019 3:27 am, edited 1 time in total.
Top

This game has still that AGE WEGO aspect that makes for some hard and tense tactical decisions that can mean the difference between victory and defeat, depending on whether you guess right what the opponent does. But it lacks the rules of engagement options of AGE.

How do we call that in wargame terms: more strategic, less operational, or is it tactics?
Top

New nation spawning is a bit opaque so we're going to add some feedback to let you know whats happening, hopefully in the next patch.
Top

springel wrote: ↑
Tue Jul 16, 2019 1:58 am
...
I guess the starting moves are very critical for the Cheruscii. Do you have to play it very slowly? But all the (distant) neighbour AI's are also expanding quickly, so keeping small seems also without hope.

many German tribes have the clans trait. So if they are in civ level I they will have regular civil wars on death of leader, so yes may expand fast and then collapse.

check out the manual, but your security is no region with loyalty < 75, you'll get to civ 2 fairly safely and then you can expand
Top

The 'Saxones' will appear later in the new patch, because they were not near the Cheruscii in 300 BCE. So more breathing room for these fellows Germans!
AGEOD Team - Makers of Empires, ACW2, WON, EAW, PON, AJE, RUS, ROP, WIA.
Top

Proof of how quick that was: 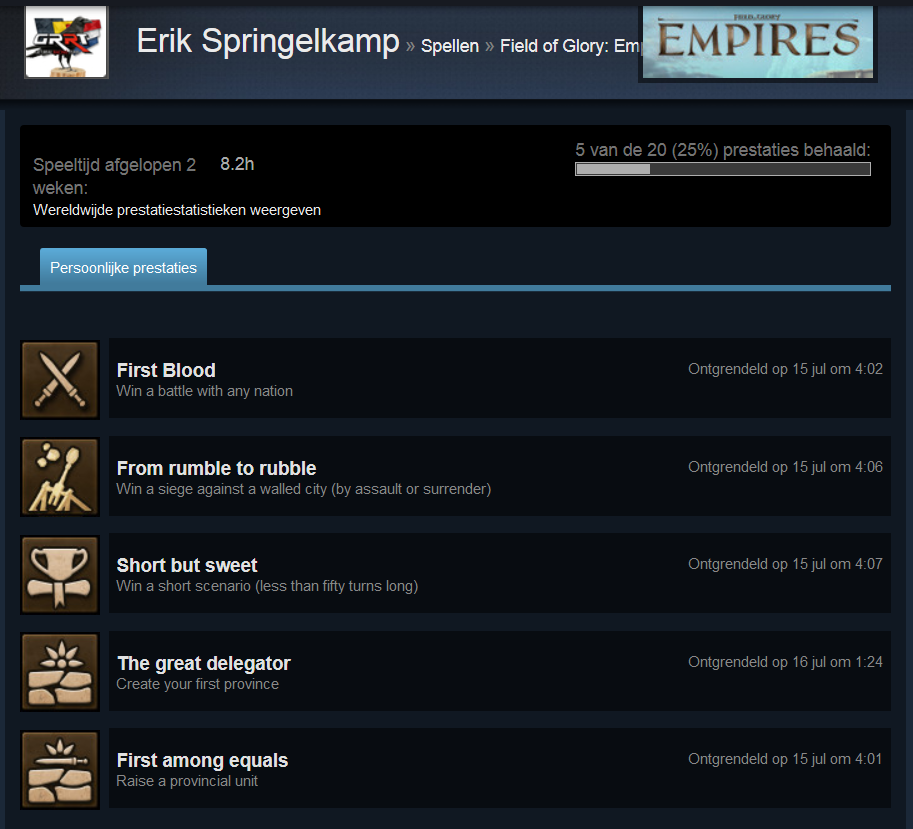 That was 5 minutes of active game play.