Field of Glory: Empires updated to version 1.0.6 (with a news about Diplomacy)

Field of Glory: Empires updated to version 1.0.6 (with a news about Diplomacy)

A new version is available for Field of Glory: Empires - 1.0.6 - and it is dedicated to adding some custom content for Kolchis and Armenia, a very interesting tweak in the Nation Panel and may other improvements.

But before diving into the new content, some pleasant news. Version 1.0.6 is meant also to prepare the game for something very special. Brace yourselves as the Diplomacy Update will be the next one. We will give all the relevant information in the next announcement, so stay tuned for further updates!

The nation of Kolchis, located along the coasts of Pontus Euxinus (also known as the Hospitable Sea, or the Black Sea) possesses several thriving cities where Greek merchants prosper. In the hinterland, rough mountain tribes are often a problem, but they do provide the cities with fearsome warriors, very adept in hills and mountains warfare.

For this update, Kolchis benefits from a heavily revised setup, as they are now a Kingdom with the  Hellenistic tradition and with a merchant perk. Their cities will be more advanced and their standing army more powerful. But that’s not all, as they now gain access to no less than 8 Missions to perform!

Missions are optional goals to pursue, with very diverse possibilities. Subdue a neighbour, establish a trading route, drain the swamps that plague part of Kolchis and more.
A new reports tab in the nation panel will let you follow the current mission status. 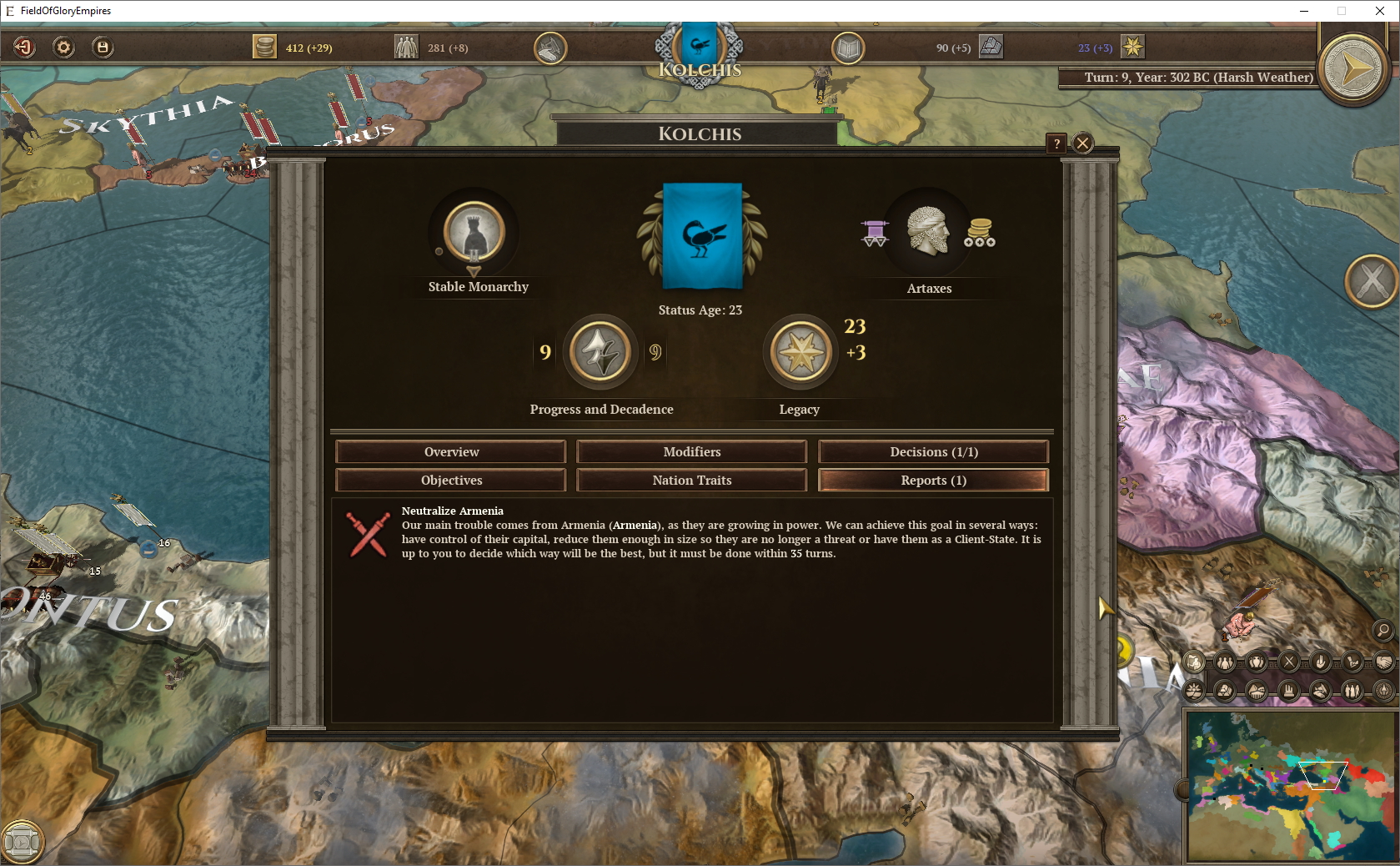 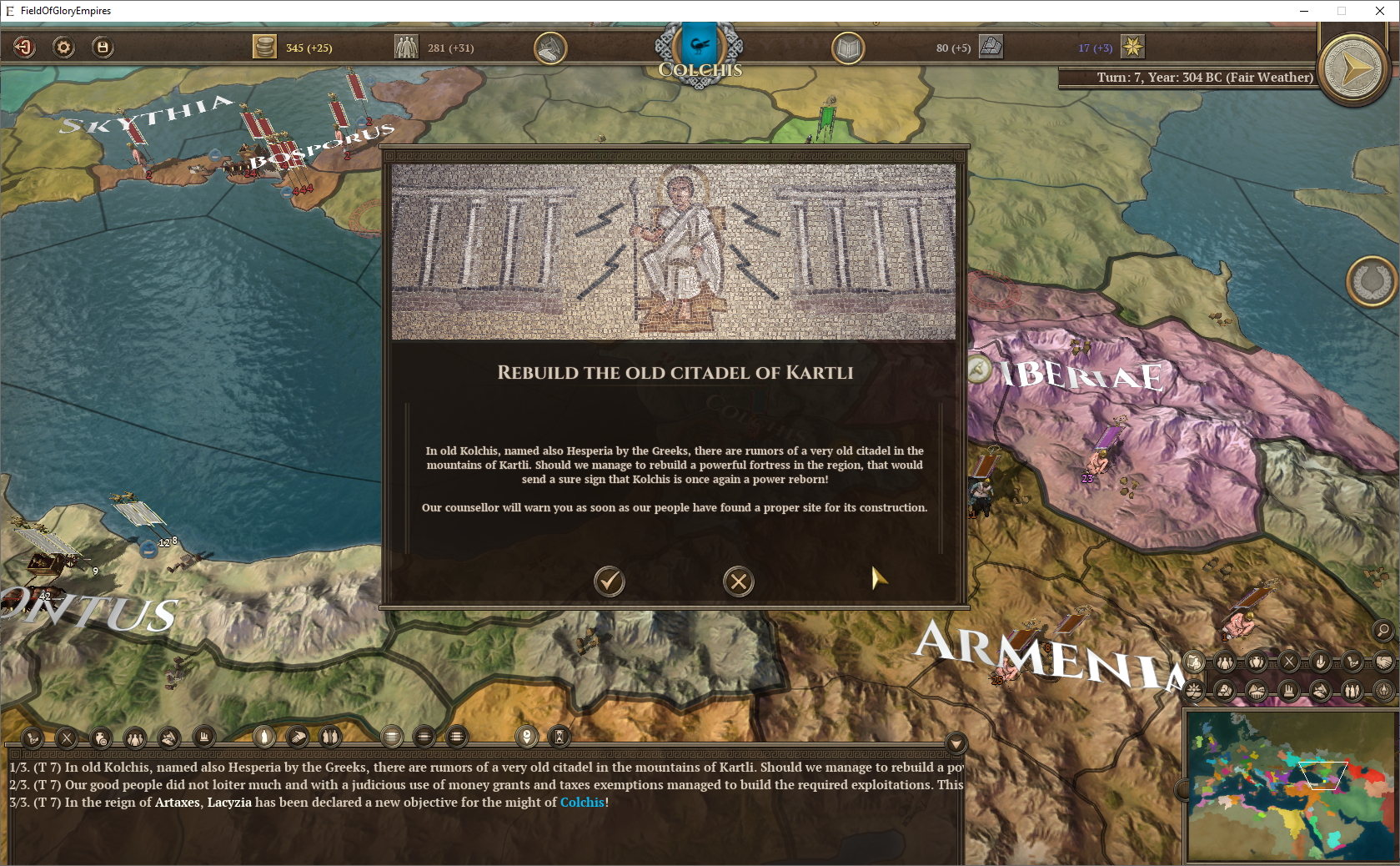 Armenia custom content
Armenia enjoyed some independence under the Persian Empire, as a satrapy with loose control from the Persian court but was dominated by the Seleucids up to 190 BCE when it gained full independence. Artaxias expanded the realm in the Caucasus region and under Tigranes the Great, the realm reached Antioch and Damascus and defeated the Parthians. At this time, the Armenian Kingdom was de facto an Empire, and Tigranes named himself ‘King of Kings’ as he had several client-states. 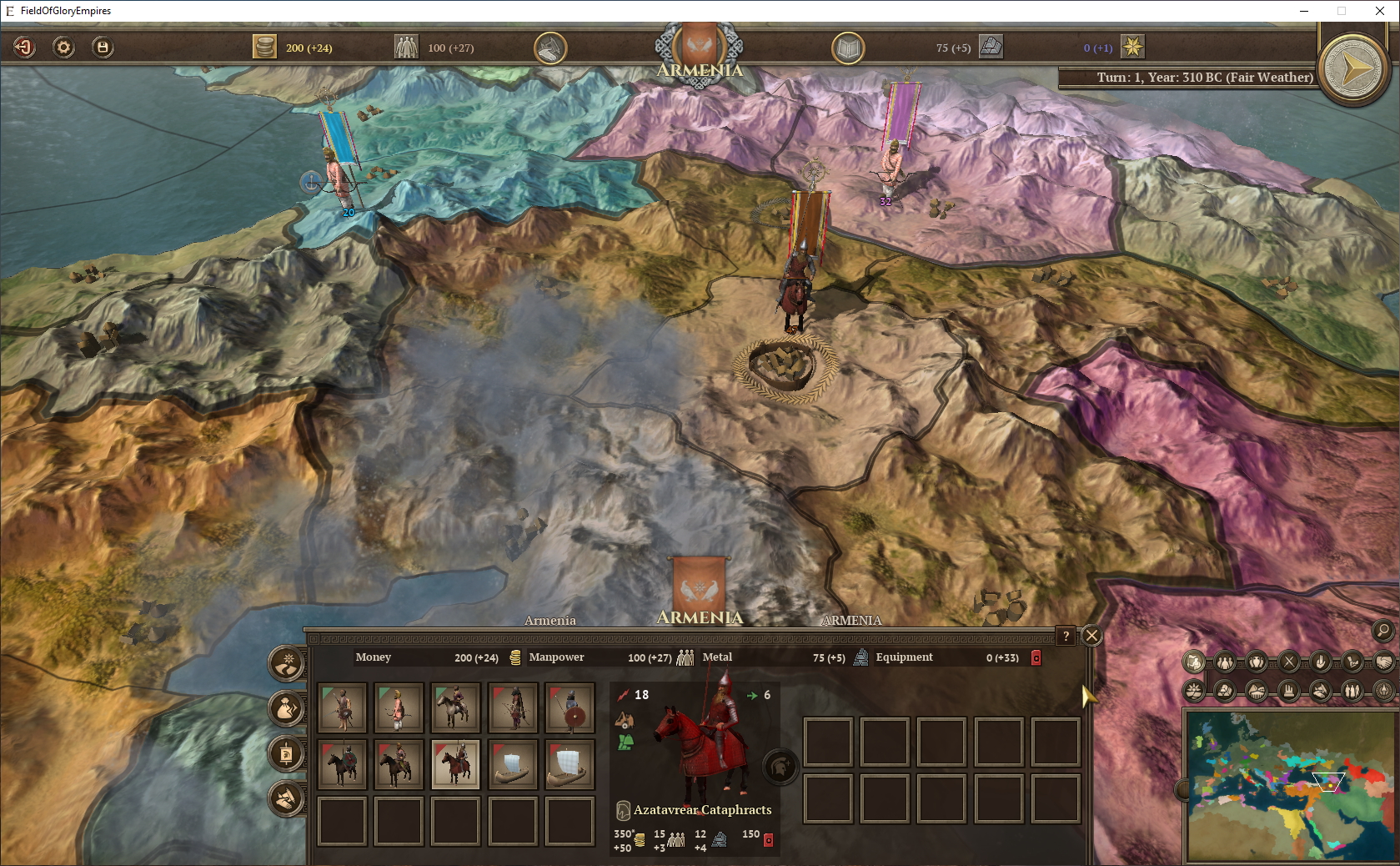 3 Missions
•    Create Greater Armenia (expand Armenia to what Tigranes the Great managed to do)
•    Be the King of Kings (have at least 2 client-states, as Tigranes who had 4)
•    Between two giants (manage to be friends with both Rome and Parthia, no small feat)

The nation panel now let you access an interactive mini-tree where you can navigate, starting with your current government status, the various possible stages of your nation. What will happen if you evolve, what will be the result of the decadence of your empire? Everything is now accessible, with a list of possible effects! 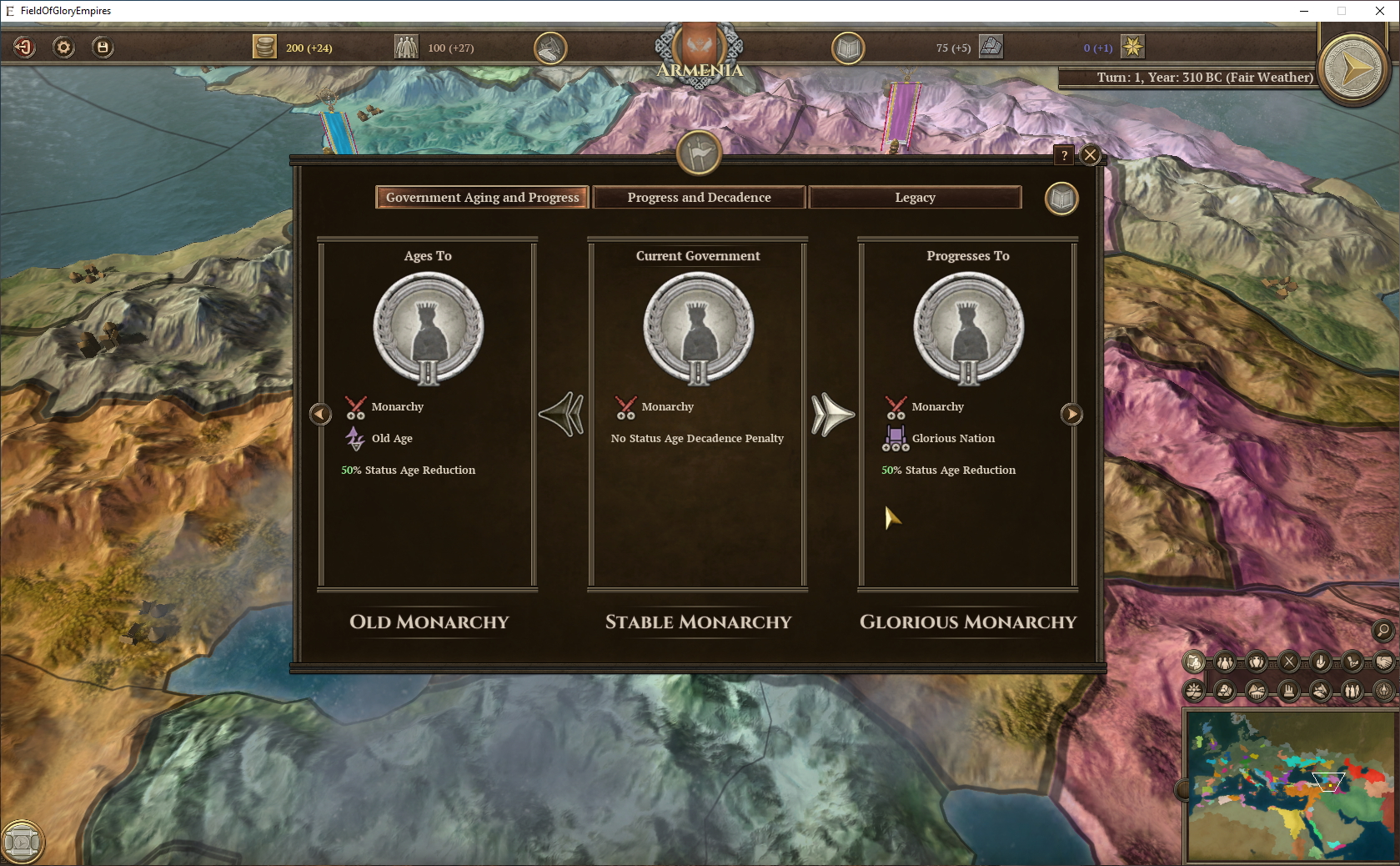 GAMEPLAY and SETUP (improvements and fixes)
• Smarter dynamic objectives
• Fixed issues with Builder Guild and late wonders
• Added exclusivity to well and irrigation canal
• Fix to tools factory
• Fixed hospital chain of buildings
• Fixed Babel Tower modifier not properly given
• Capital region food need for growth increased
• Brigantes now have Tin resource, not lead.
• Caucasian ethnicities don't have access to phalanxes
• Tweaked pop growth formula - harder to get really big population
• Fixed issue with Hunting Grounds & Master Hunter
• Military buildings have greater importance in max metal and manpower stockpiles
• Deficit spending and modifiers – the bigger the deficit you run, the higher the penalties!
• Fixed Sagittarii not provided to Rome in some cases
• Improved how the game determines who is defending (outside of assaults)

Thanks very much for the update and changelog! Sounds really promising and great to see how you further develop this great game! Looking forward to check out the updates in my current PBEM match.

Changes look very encouraging. The Nation Panel to better explain what is happening with decadence and changes in status is a good idea (although the OVERALL picture must still be understood, RTFM).

The missions look like a great addition. I can only hope and presume that this will be expanded out to many other nations?
Top

p.s. Those cataphracts look amazing. I am playing Armenia next because I want them!
Top

niki_belucci wrote: ↑
Wed Dec 04, 2019 4:57 pm
Thanks very much for the update and changelog! Sounds really promising and great to see how you further develop this great game! Looking forward to check out the updates in my current PBEM match.

Thanks Niki. The unofficial German translator we have, a rather good strategy gamer himself (and native German) has committed the 1.06 German texts though, so this will be in for the next (upcoming) patch.

How to get the mission? i tried new save using colchis and armenia. I played till 50 turns and didnt get any mission on the report tab
Top
Post Reply
6 posts • Page 1 of 1