The tournament will be a doubles event played using FoG AM version 3.0. All games will be played on standard 6x4 (ish) tables and the event will be run as a 4-round Swiss-draw competition. 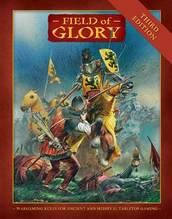 Period: Any army from the new Book 3. Allies from other books are allowed.

Players will submit three army lists of the same army, one at 900 pts, one at 1000 pts and one at 1100 pts. Each army must be at the same date and same sub-option if appropriate, if an army has the option where all troops must be either Medium Foot or Heavy Foot, all three versions must have the same option. Allies can be taken from any book. The list checkers decision is final.

Bookings will be via the Firestorm website, follow this link:
https://www.thebattlefields.co.uk/event ... mm-doubles:
Last edited by dave_r on Sat Nov 03, 2018 12:29 pm, edited 1 time in total.
Evaluator of Supremacy
Top

Only a month to go.

Can all lists please be in before 7 Jan 2019 please

Players entered so far are:

I'm checking on Scott and Royle...
Evaluator of Supremacy
Top

We have a possible ninth team for Godendag - can we russle up somebody to get 10 teams?

Alternatively, would a team want to split to ensure there are no byes?
Evaluator of Supremacy
Top

Chaps, is there room for Owain and I to take 10th team slot?
Top

All lists in and correct. Except Martyn
phil
putting the arg into argumentative
Top

Runners and Riders are:

Thanks for checking the lists Phil.

Many different armies for the turnips to run over

Would anybody mind if I published the first round draw early?
Evaluator of Supremacy
Top

I've had at least half the people agree on the FoG Email thingy, so here is the round one draw

Still waiting for you to post about your ignomy Dave

Both he and David went to bed early Saturday night, obviously trying hard to win. And then got spanked in the morning by Steve and Paul
phil
putting the arg into argumentative
Top

Since Dave didn't win he's obviously not posting the results. Here's the top 2