petedalby wrote:An unusual choice for you too Dave. I don't think I've ever seen an Early Ottoman taken to a competition. Doesn't that normally get described as 'girlie shooty army' by you?

Don't be ridiculous! Mine is a manly army specialising in distant combat.
Evaluator of Supremacy
Top

Sorry guys,now can't make it.
I blame Dave for ridiculing me
phil
putting the arg into argumentative
Top

Don't be ridiculous! Mine is a manly army specialising in distant combat.

Of course - how stupid of me!

That's another blow! I can't remember us ever having so many players drop out at the 11th hour. Hope everything is okay Phil.
Pete
Top

David I've asked Bob if he wants to come send him a message he would do either FOG or MEG but he as to ask Lynn his boss so i don't know 100%if he's would come or not.

davidandlynda wrote:Thanks Andy
We never know what we will end up with until everyone is sat down
David

And even that is capable of changing on Sunday morning ...

Looking forward to seeing you all this weekend. I will be there from some time on Friday morning. The venue is available all weekend, so please do come early, enjoy the Expo, bring along stuff to share with us, etc.

ney63 wrote:David I've asked Bob if he wants to come send him a message he would do either FOG or MEG but he as to ask Lynn his boss so i don't know 100%if he's would come or not.

The pot calling the kettle black!

Unfortunately I cannot make it because I am doing man things!!

Just wanted to thank everyone involved with this year's Challenge - particularly Tim Child, David Fairhurst and Andy Ellis for making sure that the rest of could enjoy a weekend's wargaming.

4 very enjoyable games vs Terry Shaw, John Patrick, Paul Longmore and Dave Putt saw me struggling to cope with the un-maneuverability of undrilled Knights and longing for the tactical flexibility of the Yuan Chinese. Commiserations to Paul who should have taken my army and would have done so with another 10 minutes of game time.

really sorry for not attending at last minute.... my one man band beer sales business is getting too busy and interfering with real life! plus i was emotionally and physically exhausted from watching huddersfield town achieve greatness after 45 years of trying .... football and gaming dont seem to mix too well at weekends so will see what the coming season brings....
Top

For the first time ever The BHGS Challenge moved north to the NEC in Birmingham to run alongside the gaming phenomenon that is UK Games Expo in June 2017. This put all of our BHGS Challenge players in a hall which at times must have had over 1,000 gamers playing miniatures and card games!

This year's attendance also represented a year-on-year increase in player numbers across those periods and systems which ran this year - so we certainly put on a great showcase for the tabletop gaming side of the hobby in front of the 16,000+ people who came to UKGE too. ​Full results for the periods where we have been sent them so far are now on our website, along with some pictures from the event - have a look and see who you can spot!

After the Challenge we also have the following competitions coming up in the next few months that you may be interested in attending: Britcon in August, the Ancients Pairs and FoW Pairs in September/October, and we are also supporting the Derby Worlds in October 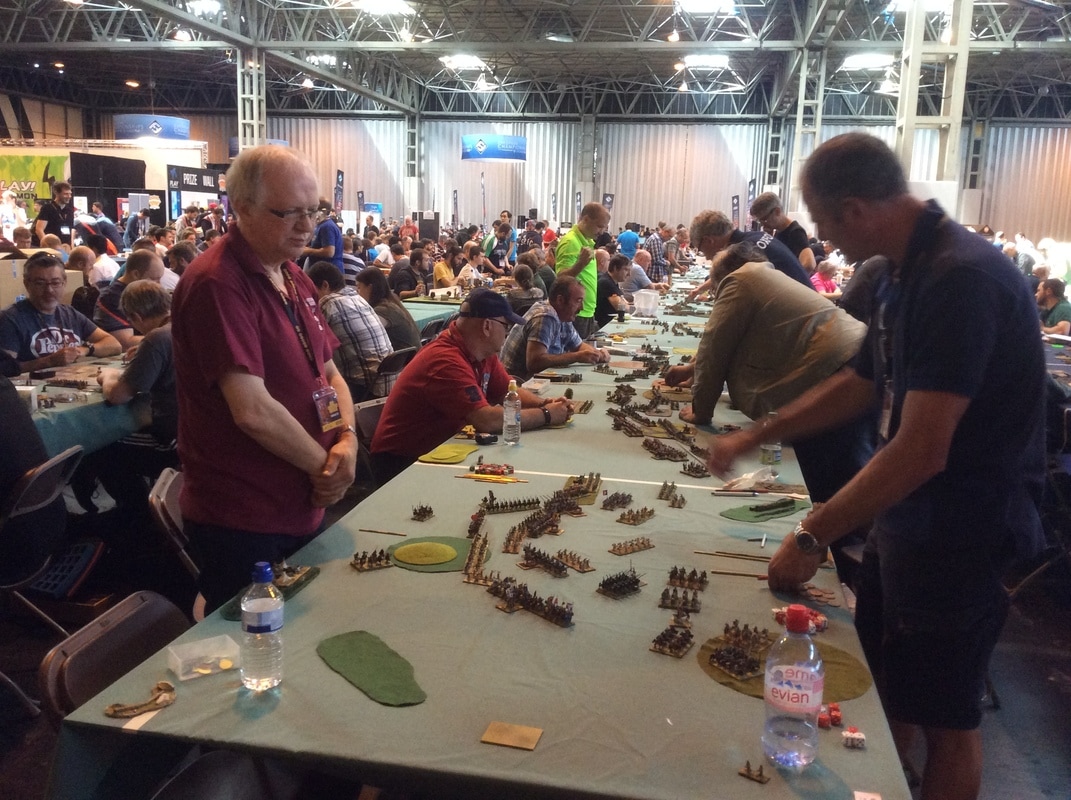 Who is that handsome chap in the foreground?
Pete
Top