At Roll Call there will be one FoGAM Version 3.0 Period:

All games will be played on standard 6x4 (ish) tables and the event will be run as a 4-round Swiss-draw competition. 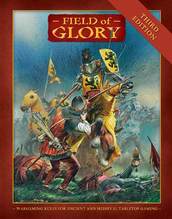 Allied contingents can only be drawn from these lists and must be within the permitted date range.

No Knights are permitted.

Any other list queries to Pete Dalby via the FoG Forum please.
Last edited by madaxeman on Sun Jan 28, 2018 9:49 am, edited 1 time in total.
http://www.madaxeman.com
Become a fan of Madaxeman on Facebook at Madaxeman.com's Facebook Page.
Top

Thanks Tim. I've bought my ticket - looking forward to the challenge of adapting to the new rules!

Lots of choice in this theme. A big 'thank you' to Phil Powell for getting us on the right track.
Pete
Top

petedalby wrote:... 'thank you' to Phil Powell for getting us on the right track.

It turns out I’d been misinformed...
http://www.madaxeman.com
Become a fan of Madaxeman on Facebook at Madaxeman.com's Facebook Page.
Top

The overall event is now at 126 players entered out of the 144 capacity
Booking page : https://www.eventbrite.com/e/roll-call- ... ?aff=yahoo
http://www.madaxeman.com
Become a fan of Madaxeman on Facebook at Madaxeman.com's Facebook Page.
Top

Combing through the permitted lists I've discovered that the Carolingian Franks can have Frisian or Old Saxon Allies from Legions Triumphant which are within the permitted date range.

I will ask Tim to update the list and the BHGS website. Apologies for the omission. If there are any others, please let me know.
Pete
Top

philqw78 wrote: Just in case Terry gets even more delinquent, no knights are allowed

Thanks Phil - just a reminder:

Players have entered Roll Call on the following basis:

With no guarantee of when the new V3 army lists will be produced we will use the existing Army Lists adjusted for V3 points. All players must submit their lists using the new V3 Army List spreadsheet. This will not be changed irrespective of when the new lists are published to give all players certainty.
Last edited by petedalby on Tue Feb 20, 2018 8:50 pm, edited 1 time in total.
Pete
Top

If the new book 2 is out in time these lists will be allowed, again subject to the date restriction of 550-1040AD

I'm not sure that's very helpful Phil. Who has asked you to post that?

Players have entered Roll Call on the following basis:

I really don't think the new book 2 lists should be used. Firstly, what Pete said. I'll be starting my army design next week based on the old books and don't want to change horses in mid-stream. Secondly, I (and Terry and Steve Murton) know pretty much exactly what will be in the new lists. So we would have an unfair advantage. Lastly, we finished the proof reading last week (several dozen dull hours); I'm not sure what the pre-production, print and circulation timescales are but I imagine longer than a month. So it would be cutting it quite fine I think.
Top

Cheers guys - so as we were.

Only the original army lists may be used for Roll Call. Mr Briggs cites some excellent reasons why we made that call originally.

One thing we haven't published is the deadline for lists to Andy Ellis for checking. Email address : andyellis.ellis@gmail.com

Never mind, at least you'll thrash Ruddock at the weekend. If you can find him after the warband have gone straight through him.
Top

Had a brain fart. Looked at the lists above, thought (?) I've done the book 2 lists for Campaign but nobody has done them for Roll Call so just went on autopilot
phil
putting the arg into argumentative
Top

No worries Phil - I'm sure no-one else noticed. See you on Saturday!
Pete
Top

So just so everyone knows Roll Call will be the first BHGS competition to trial the 35-0 scoring system.