Welcome to our second Developer Diary and thank you for your interest in Distant Worlds 2.

This diary will discuss some of the “story” behind the galaxy of Distant Worlds 2, an interesting place for you to explore.

One of the best parts of Distant Worlds is that the galaxy is present in full detail and “alive”. There are always things going on almost everywhere you look. Much less is abstracted away than in many other 4x games, where you may only see the ships in your military fleets, or a system may be represented just by a star and a few major planets, or where the galaxy really is just star systems, points if you will, connected by lines that determine where you can go. In Distant Worlds 2, you have all of space, both the systems themselves and every bit of space within them, every planet, moon and asteroid, but also the space between systems, including nebulae, ion, radiation and gravitic storms. Exploration, travel, battles and everything else can happen anywhere within that space. 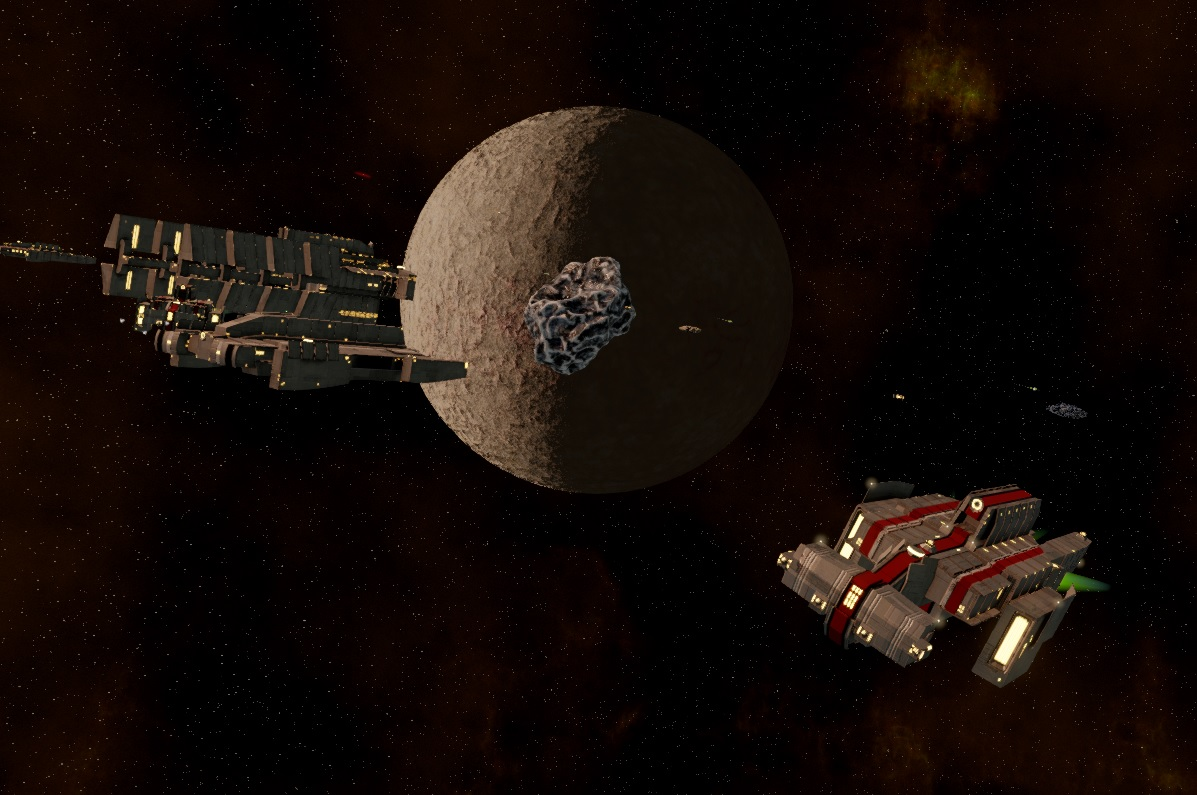 We’ll get into some more of what exploration is like in a future diary, but in terms of story, this allows us a lot of room to work with to place all kinds of remnants of the “ancient galaxy” as well as unique characteristics and bonuses which separate one planet, moon, star or asteroid from another. You may find ancient ruins, fragments of data revealing previously unknown locations, abandoned or partially destroyed ships, the remains of ancient fleet battles, a unique planetary feature, and so on and so forth. All of this is present at the generation of the galaxy, but some things are much easier to find than others, some can only be found by the best explorers and some are much easier to find once you have the right clues to point you in the right direction. Each generated Distant Worlds 2 galaxy is a truly huge playground with a great many hidden discoveries waiting to be found. 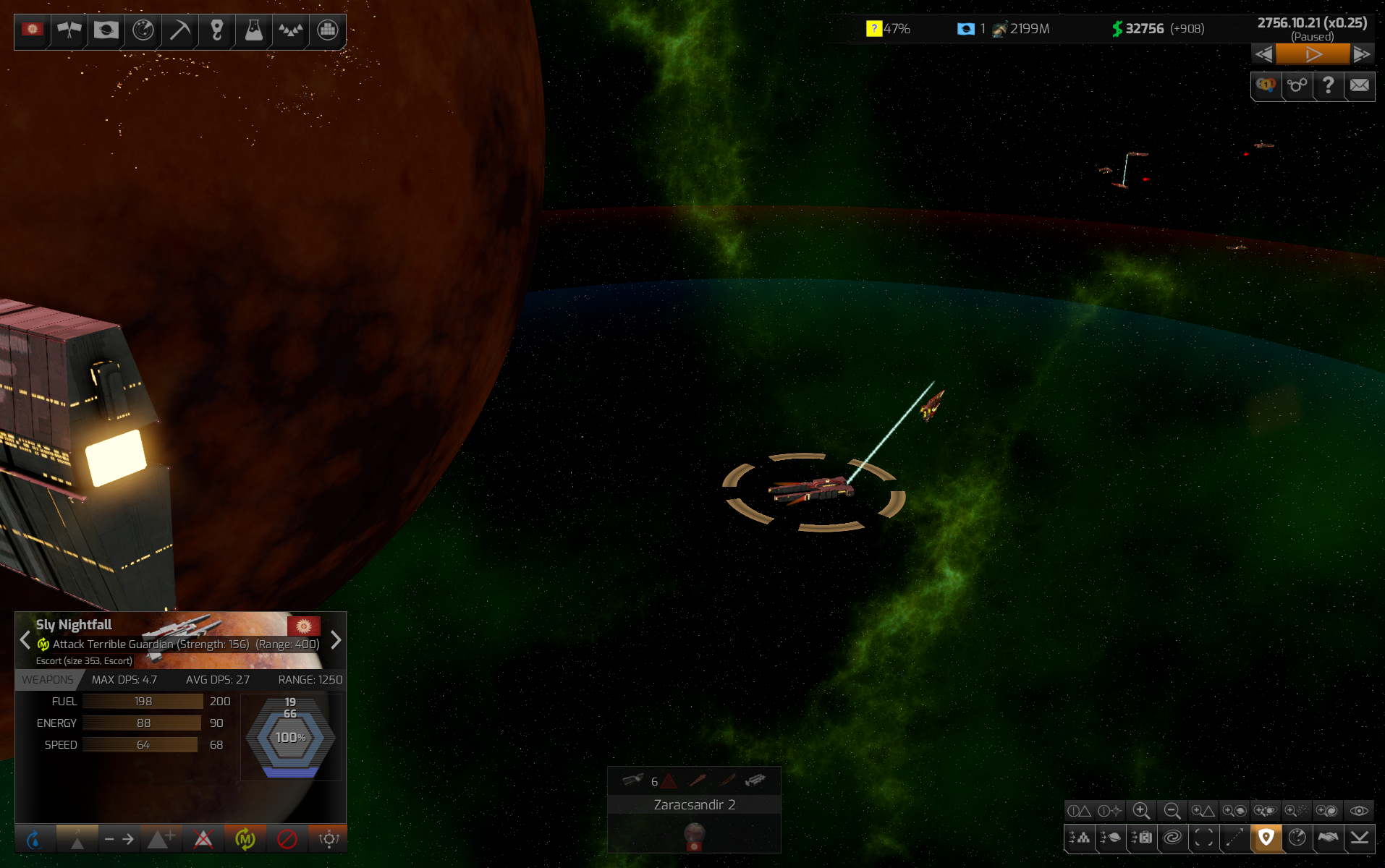 However, it’s not just these more static discoveries that await you in space. First of all, you have what we call “Pirates”, though their full story is much more complex than that brief description or what first impressions will likely suggest. They’ll challenge you initially, as they are used to having a monopoly on space. You’ll likely have to repel their raids and decide whether to focus on destroying them or accepting their terms to some degree in order to negotiate a peace. They do know more than you about the galaxy, if you’re willing to pay their price. 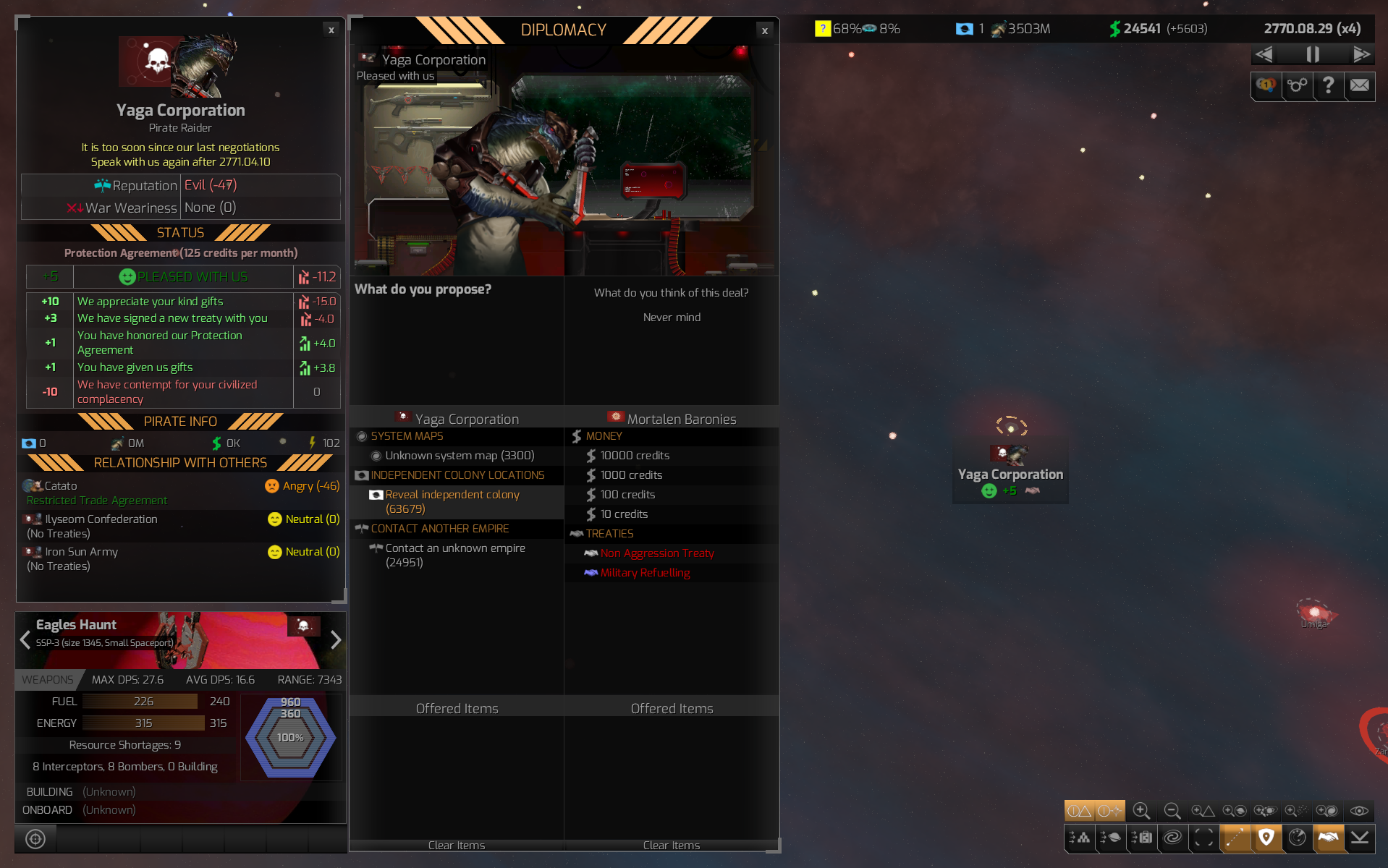 There are also creatures of unusual size and origin that exist in space and travel between the stars. Their origins are for you to discover, but you will find them a significant obstacle to expansion in some systems and a navigational hazard in others.

Here we can make out a Gravillex in the distance which has just missed slicing open a fleeing Human Frigate with its energy beam weapon. These are remarkably aggressive creatures that did not exist in the “Ancient” galaxy, but are now found in significant numbers, often feeding on stars for their energy. The type of star they’ve been feeding on also has a significant effect on how dangerous a given Gravillex may be. 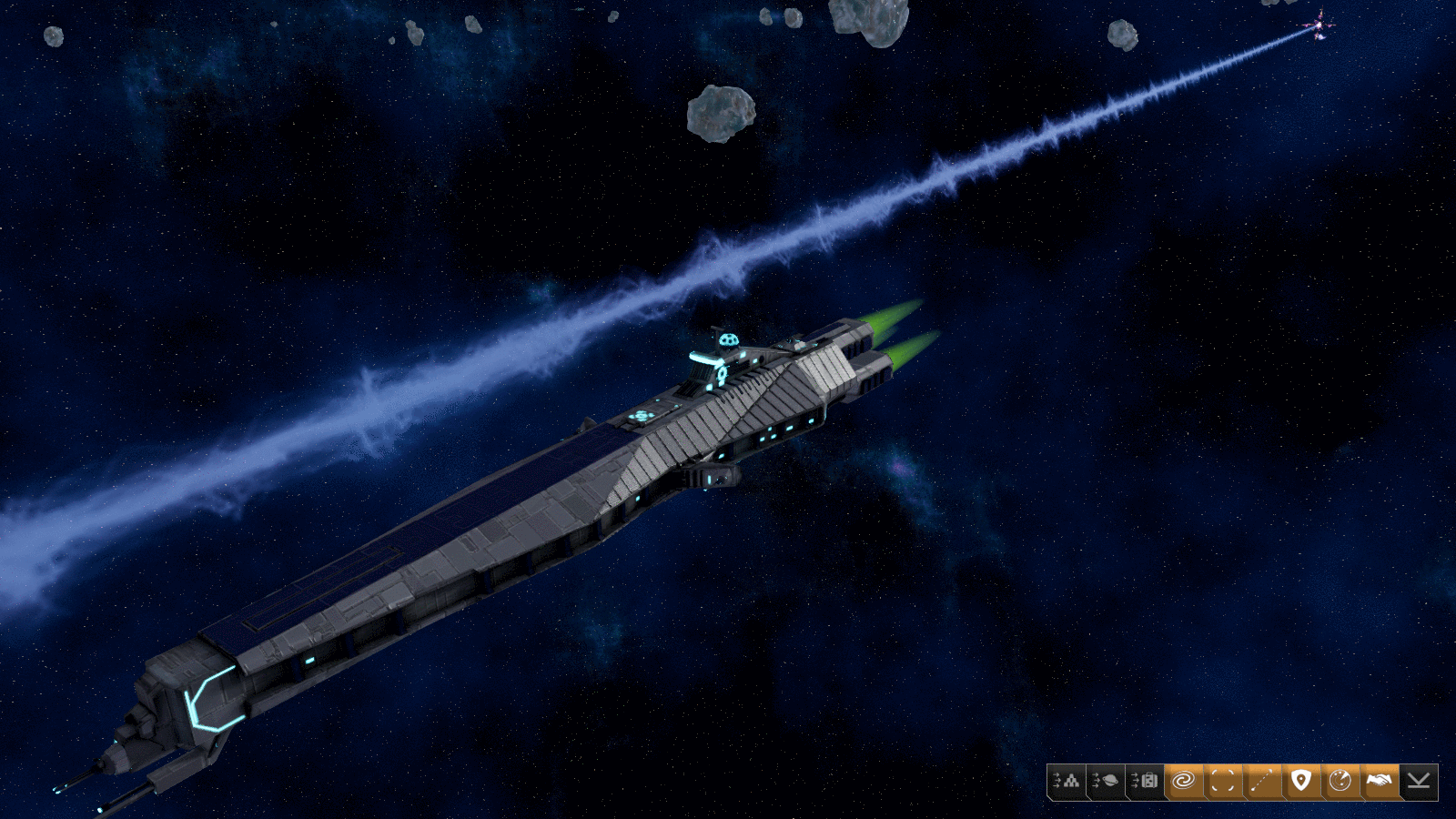 Here’s an Ardilus, normally a much more passive denizen of space that is usually found around gas giants. Beware though, as it is quite territorial if you come too close as this Mortalen Escort just discovered. 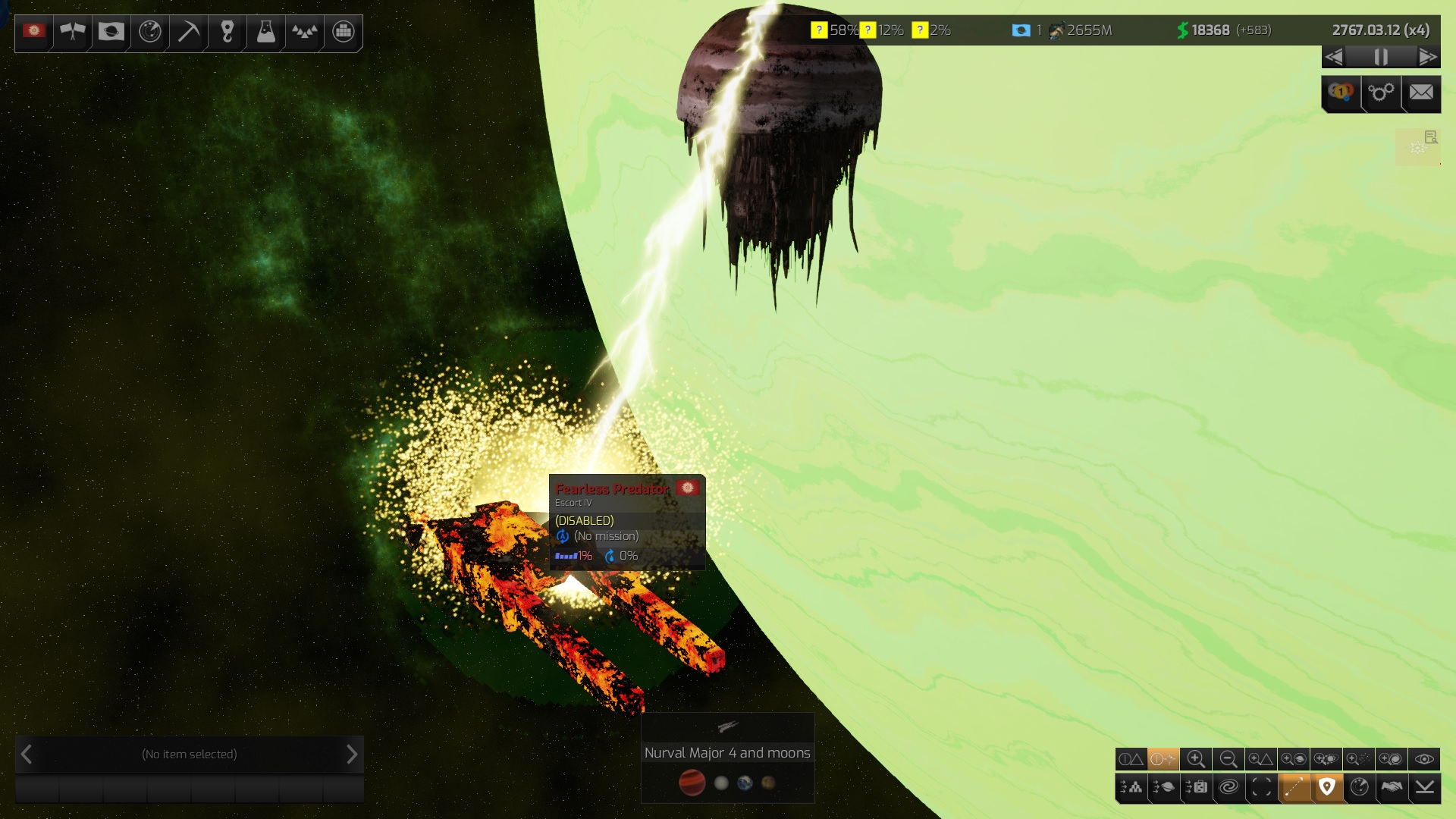 There’s also the dreaded Vordikar, but it’s quite stealthy and the last three exploration ships we sent into the asteroids to find one for you never returned. I promise we’ll show you one in a future diary.

Beyond all this though, we have an expanded “Main Story” as well as a “Faction Story” for each of our playable factions (Humans, Ackdarians, Mortalen, Haakonish, Zenox, Boskara and Teekan). This is a major effort above and beyond anything that Distant Worlds: Universe had, involving the creation of a new story and event system which allows us to do much more than we could in the past, including event and story choices (and this is all also open to players and modders who wish to tinker and use the system for their own stories).

Each Faction in Distant Worlds 2 by default represents a certain playstyle. For example, the Mortalen are “Disciplined Warriors” which means that their faction story and faction victory conditions will tend to reinforce that playstyle and reward playing them in that way. While the Main Story will reveal some information about the Ancient galaxy and what happened in the past, each Faction Story will reveal more about the specific background and events that involved that faction, as well as giving the player a great chance to be the first to find some truly unique and rewarding locations. By playing through all the faction stories, the most complete account of the Ancient galaxy can be pieced together.

As an example, here’s a shot taken in “cheat mode” showing a small selection of some placed main and faction story events across a section of a generated galaxy, on top of the normal hidden bonuses, ruins and discoveries. Each of those little labels indicates either a single even or the initial trigger for an event chain. Of course, you won’t have this cheat view to guide you in your own galaxy, but if you explore well and boldly, you should have plenty of good stories to tell! 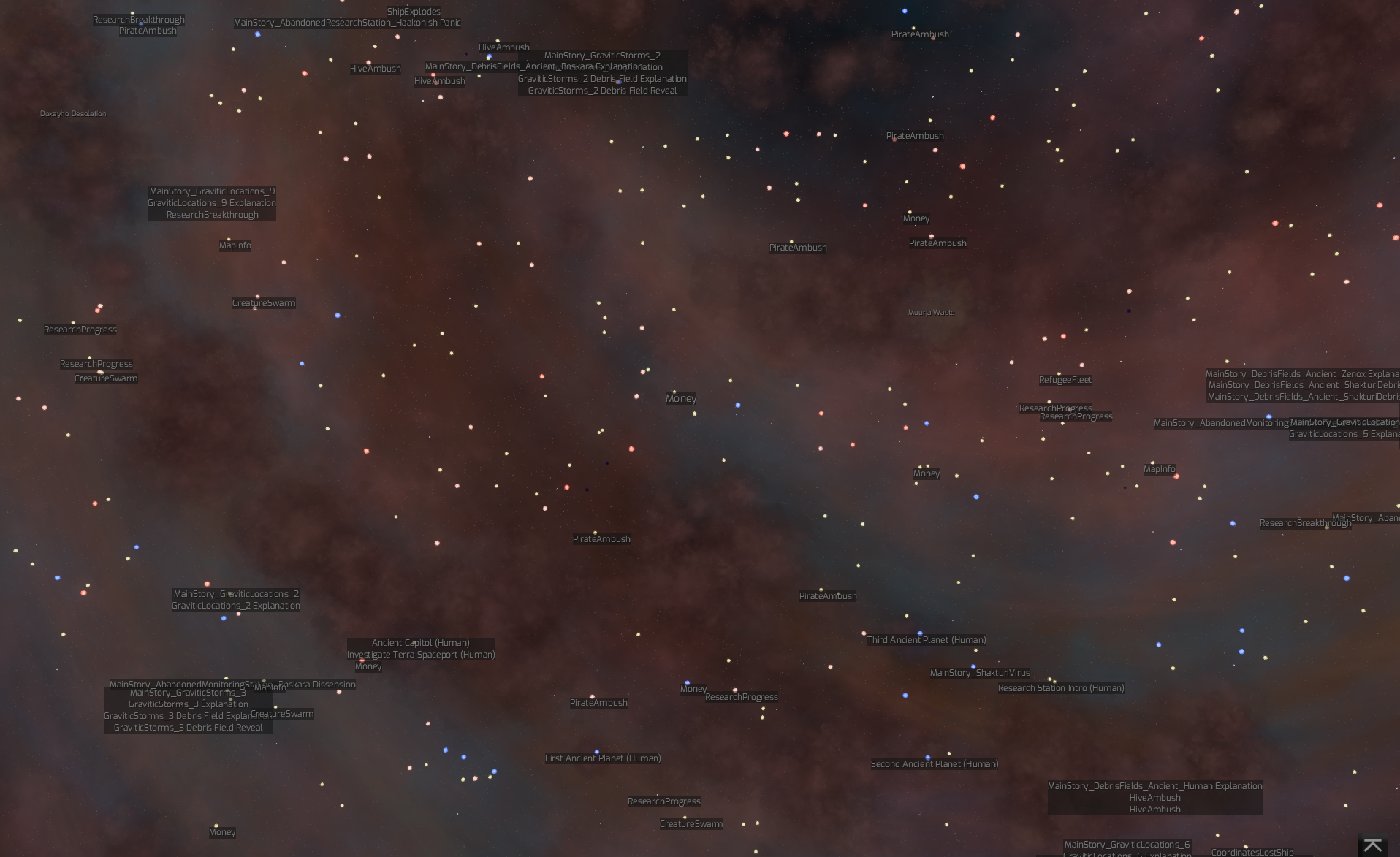 As always, we want to let you play the game your way, so in the galaxy setup you can choose to enable or disable pirates, space creatures and the main and faction stories, as well as tailoring the amount and strength of pirates and space creatures. You can also disable faction victory conditions and change the government and play your chosen faction in a different way. We look at the galaxy as your sandbox and want to give you the tools to make sure it’s setup the way you would like it to be.

I hope this shed some light on the Distant Worlds 2 galaxy and what your own Distant Worlds story might be like. I’ll be back in a couple of weeks with a new Developer Diary for you all!
Top
Post Reply
1 post • Page 1 of 1