Candidates are invited to join a congress at which it will be decided who will be the new leaders of the lands of the ancient continent of Minaria. This is a campaign based on the 1979 version of Divine Right, without the magic. 16 countries are available (the pirates and the barbarians are not visible on the map and will only be player countries if there are sufficient players)

Much of the fun of Divine Right will be included, though, such as being able to explore distant lands and discover ancient treasures or employ mercenary bands; the diplomacy system will be in use for non-player countries.

The countries are:
Elfland, Alzakia, Immer, Hothior, Mivior, Shucassam, Trollover, Rombune, Muetar, The Eaters of Wisdom, the Black Hand, Pon, Zorn, and maybe: the Pirates, the Barbarians (several tribes), and the Lizardmen. Magic does not work in The New Age of Minaria and the peoples have mixed, so although their country names continue, and people may claim descent from a particular race, those races don't really exist any more.

Players will be supplied with more information about their country when they join the game. Here is the general player's guide: https://drive.google.com/open?id=1r7LkV ... VHkM1suBH3 You will see that information regarding many places has been left out - those places within a player country will be described in a player's country guide (including their recruitment and income potential), while only myths and legends are available to describe the other places, some of which may be misleading. Players can find out what is the truth about those places in various ways.
Here is a sample chancellory (players will be given a customised version): https://drive.google.com/open?id=1aqklu ... 3yfY0In0Tv
Here is a copy of the Divine Right rules (you can play the campaign without reading them): https://drive.google.com/open?id=1uoRF_ ... naxXdH11aZ
This is the Divine Right page at Boardgame Geek: https://www.boardgamegeek.com/boardgam ... ine-right
There are more Divine Right files available at the Divine Right Yahoo Group https://groups.yahoo.com/neo/groups/Div ... tGame/infoDivine Right can also be played via Vassal, so if you have Vassal you can tinker around with it that way.
If enough players are on Facebook I will setup a Facebook group for the campaign.

If you would like to join the campaign, PM me and advise which country you would like to have (plus a second and third choice), as well as what time zone you are in or what continent live on (so I can put people who are in similar time zones near each other).

Who else would like to join the royal families of Minaria? The game will not start until we have at least four players.
Top

I'll save the myriad questions I have for later!
Top

the first issue of The Minarian Chronicals is out, you can download it here: https://drive.google.com/open?id=19g-BU ... D2wBAi8qDz

In This issue:
The maximum size for an army will be 2000 points and the minimum size will be 600 points.

TheGreyMouser has been selected by the Congress of Nations to be the Warlord of Zorn, Sirdar Draschgig the Terrible.
Last edited by vakarr on Thu Mar 15, 2018 10:04 pm, edited 1 time in total.
Top

Great stuff - a new interesting campaign. Please count me in. Have just downloaded the details and will get back to you later today when I have had a chance to read them.
Top

What time period are the armies selected from?
Top

Most players have the option to choose what time period they like, although I wrote the rules intending to use lists prior to Legions Triumphant. For instance, the Elvish army is simply "Persian" which allows them to choose any Persian army they like one turn, and have a different Persian army on another turn. This avoids the problem of having some players with armies that are particularly strong in a particular period and some players being stuck with the inferior armies. It is all described in the Players Guide. I suppose if players don't have the Legions Triumphant DLC then they can't choose from the lists there, but Muetar still has a long list of Roman armies to choose from.
Top

Hi Vakkar, is there a map with better resolution? Place names appear to be important yet I cant read many of them. Some of the nation listed I cant even find on the map ( Where the Black hand?!!)
Cheers!
Top

I think the Black hand is that grey area of several hexes near the top right, with the single fortress.
Top

The Dwarven realm (Alzakia, light green) is in three places on the map, one north of the Elves, and two near the eastern edge of the map, next to Pon.
The Trolls ( a different light green) have four locations - the capital is between Mivior and Hothior. The Crag is between Zorn and the Black Hand. The Gathering is in the bottom right corner of the map. The Shunned Vale is next to Jipolis in the middle bottom of the map.
Barbarians may appear on the northern, southern, or eastern edges of the map.
Pirates may appear on the Isle of Fright or on the western sea edge of the map.
Special mercenaries appear at their home base (e.g. Lost City of Khos), but players won't get them randomly, they will have to send an emissary or an army to get them.

A video of the game play https://youtu.be/NXbhVNVta7U

Minaria before the Cataclysm - high resolution, you can zoom in on it all the way, the map is different but not the place names and their locations

A Divine Right game being played, the view is pretty clear on most of the board

The Vassal game has the best view of the board, I can post screen shots from that of any part of the board you are interested in. I didn't realise it was difficult to read the locations in the map I had posted. I might make that a part of the game, so exploring the map becomes even more fun. Nevertheless I will include a higher resolution shot of your country in your country pack. Which country would you like to rule?

Yes the Eaters of Wisdom and the Black Hand (the two light grey areas) don't have much territory to start off with, that's why they have lots of other special features (including the strongest castles).
Top

For Diplomacy you will have to move an ambassador or king or queen across the lands of Minaria at a rate of 90 leagues per turn, and engage with the player or non-player when they reach the capital. Ambassadors and non- player Kings have personalities that will affect negotiations with non-player monarchs. The ultimate aim is to get the non-player monarch to be your ally, but that is not guaranteed and your emissary risks being killed in the process.

Note: emissaries can board a state barge/yacht at a city or castle (taking half a turn to do so) and travel thereafter by sea or along a river at 80 leagues per turn, at no extra cost.
Top 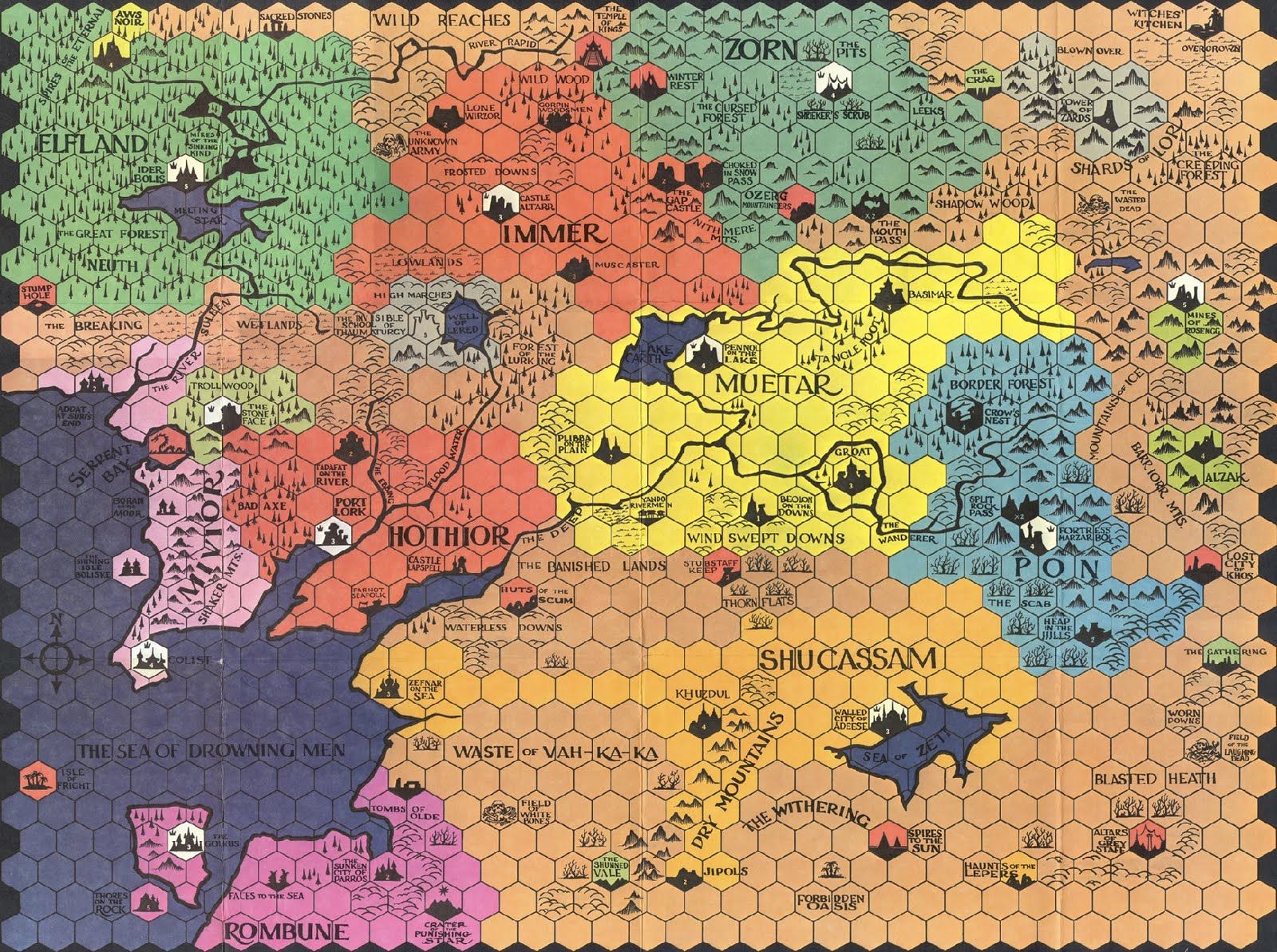 We now have five players, so the game starts now, please send in your orders!
Top

vakarr wrote:I suppose if players don't have the Legions Triumphant DLC then they can't choose from the lists there.

Could you put up a list of the players, and update it as necessary. Easier than trying to wade through all the posts to find them.
Richard Bodley Scott

So, it appears we cannot communicate with other players until an ambassador reaches them. Obviously not enforceable but I can play on faith that all abide.... however the rules/expectations should make this clear

Can you give a hard deadline on moves deadline? Might need a few days as am sadly still an employee of “the man”
Top

Thought we had a week for each turn or did I fantasize that.

Question, and apologies in advance if I didn't see it in the manual...

I assume movement is simultaneous. If so, what sorts of provisional orders can we give in terms of attacking or retreating from other armies that we encounter? Ie, if I want to attack army of kingdom X of size Y or below, ignore others, and retreat from any other force, could I do that?
Top
Post Reply
55 posts