The Cylons have rebelled. The alliance of the Twelve Colonies falters. Take control of the Colonial Fleet and save humanity from an endless war.
Post Reply
7 posts • Page 1 of 1

The Command Update is here!

The highlights of this update are highly-requested features such as Multi-ship selection, Squadron groups hotkey assignment, a Revamp of the bullet system, and much more!

This is the first of a planned series of free updates coming for Battlestar Galactica Deadlock in Season 2. You can have a look at our current roadmap for Season 2: 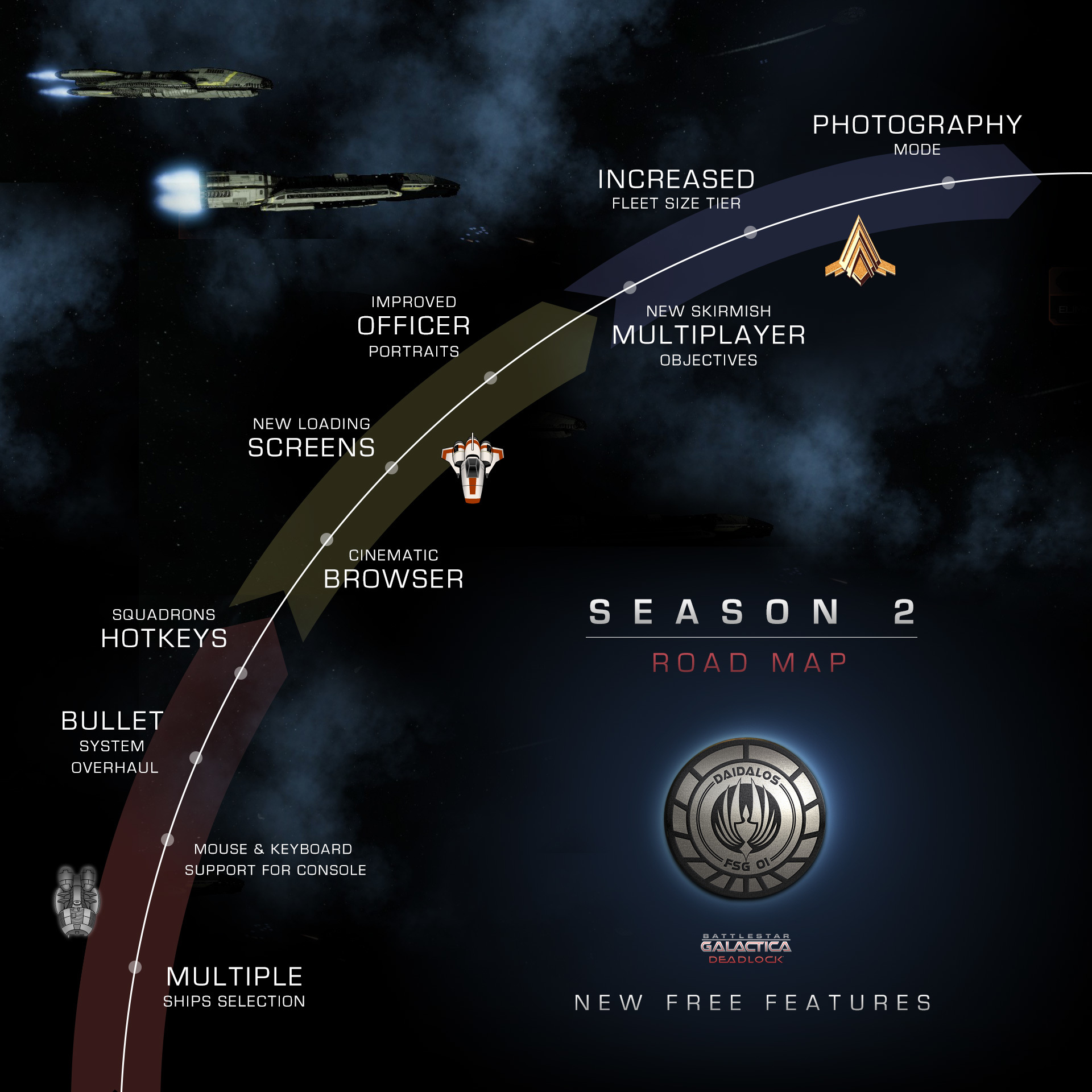 You can read the full changelog down below.

- Support for Resurrection campaign. A 10-mission campaign, set 3 years after the events of Sin & Sacrifice.
> The legendary Battlestar Galactica - badly damaged during the battle to save Caprica after the betrayal of the Kobol Alliance - has been upgraded.
> The war against the Cylons continues to escalate, and BSG-75 is at the vanguard.

New Ships:
- Jupiter MkII-class battlestar. An upgrade to the Jupiter-class battlestar, with more firepower then ever.
- Cratus Basestar. The Colonials aren't the only ones bolstering their firepower. The Cratus basestar is a new evolution in Cylon ship design.

- Taipan Fighter. A fighter deployed by the Colonials, with a powerful anti-capital cannon and a mysterious origin.
- Cylon Vespid Bomber. A deadly Cylon squadron with the ability to launch devastating bombing runs.

- User interface improvements. Numerous improvements and enhancements to make giving your fleet orders faster and easier:
> Multi-select support. Select multiple ships at once and give them orders simultaneously.
> Right-click context menus for hostiles. Right clicking on an enemy will show a context menu of actions available to the selected ship(s) in the players fleet
> Faster squadron grouping. Select multiple squadrons and press CTRL+number to assign them to a squadron group.
> All select. Pressing CTL+A selects all ships in your fleet.
- Revamp of the projectiles (bullet) systems, so bullets can now be paused between rounds. The 2-second pause of firing at the end of a round has been eliminated.
- Upgraded post-processing effects. A new full-screen effects system that refreshes the look of the game in battles.
- Support for a choice of character (Helena or Alex) for barks in Skirmish and multiplayer if a Season Two DLC has been activated
- Adjustments to AI targeting bias in escort missions to reduce targeting of ships under escort
- Added a new squadron command "Defend At Location". Squadrons will move to a location and attack squadrons and munitions that come within range.
- Added the ability to zoom in the fleet loadout UI (prior to battles, or when building Skirmish/Multiplayer fleets)
- Added a search bar to the ship name selector
- Added a search bar to the fleet selector (in Skirmish/Multiplayer)
- Improved performance of Ionized nebula
- Various balance adjustments
- Various other performance enhancements and bug fixes
- Mouse and Keyboard support for Xbox One and PlayStation 4

- Fixed Bug: Proximity mine placement UI visible in single-round replay
- Fixed Bug: Crew veterancy not set if Daidalos is at starlane
- Fixed Bug: PCMs aren't behaving as expected
- FIX: Prevented exiting to the main menu or doing anything in the options panel while the game was saving (to avoid save file corruption)
- Fixed Bug: If a mid battle save is loaded before the Cerastes is boarded, then a boarding attack will start on the Cerastes when it is converted
- Fixed various rare issue restoring save games
- Fixed Bug: Explosions do not reset if a single replay round is cancelled

Thanks for putting together a roadmap guys, it's a big help. As a PS4 player, I do have a couple of questions though.

With the addition of mouse and keyboard support, does this mean that console players will now have all the functionality of the PC version in terms of the new hotkeys, customisable keybinds, etc?
Also, will we now be able to rename our ships and fleets during the campaign?
And finally, what does FSG-01 stand for on the Daidalos seal? (This is the really important question. lol

Fleet Support Group 01.
The aforementioned post is made in accordance with the canon where the Valkyrie-class is a modern battlestar which has no place in the first Cylon War timeline. So say we all.
Top

It might sound daft, but I love that kind of minutiae. The depth of detail helps me to truly immerse myself into the worlds of Battlestar Galactica when I'm on this game.
So Say We All!
Top

With the addition of mouse and keyboard support, does this mean that console players will now have all the functionality of the PC version in terms of the new hotkeys, customisable keybinds, etc?
Also, will we now be able to rename our ships and fleets during the campaign?

Yes, all of the M+KB functionality from the PC version will be available on consoles using M+KB.
Paul Turbett - Game Director - Black Lab Games

I would really love it if you could flesh out the playback/record/edit features to:

So I have to ask.
When will tier 3 launch?
Since tier one was with the release of resurrection, and tier two is mostly cosmetic.
And I'm personally waiting for the Fleet size increase before I start playing again.
Top
Post Reply
7 posts • Page 1 of 1