This thread is to discuss the design, gameplay/testing and issues of an Operation Barbarossa map.

After much experimentation with map scale, pushing the limits and failing due to many freezes and game crashes because the map size is too large... I have concluded that making a Barbarossa map in it's entirety is just not possible unless using a ridiculous scale that would have poor gameplay characteristics. What I have settled on is cutting out an area of the last full size Barbarossa map I attempted to make. 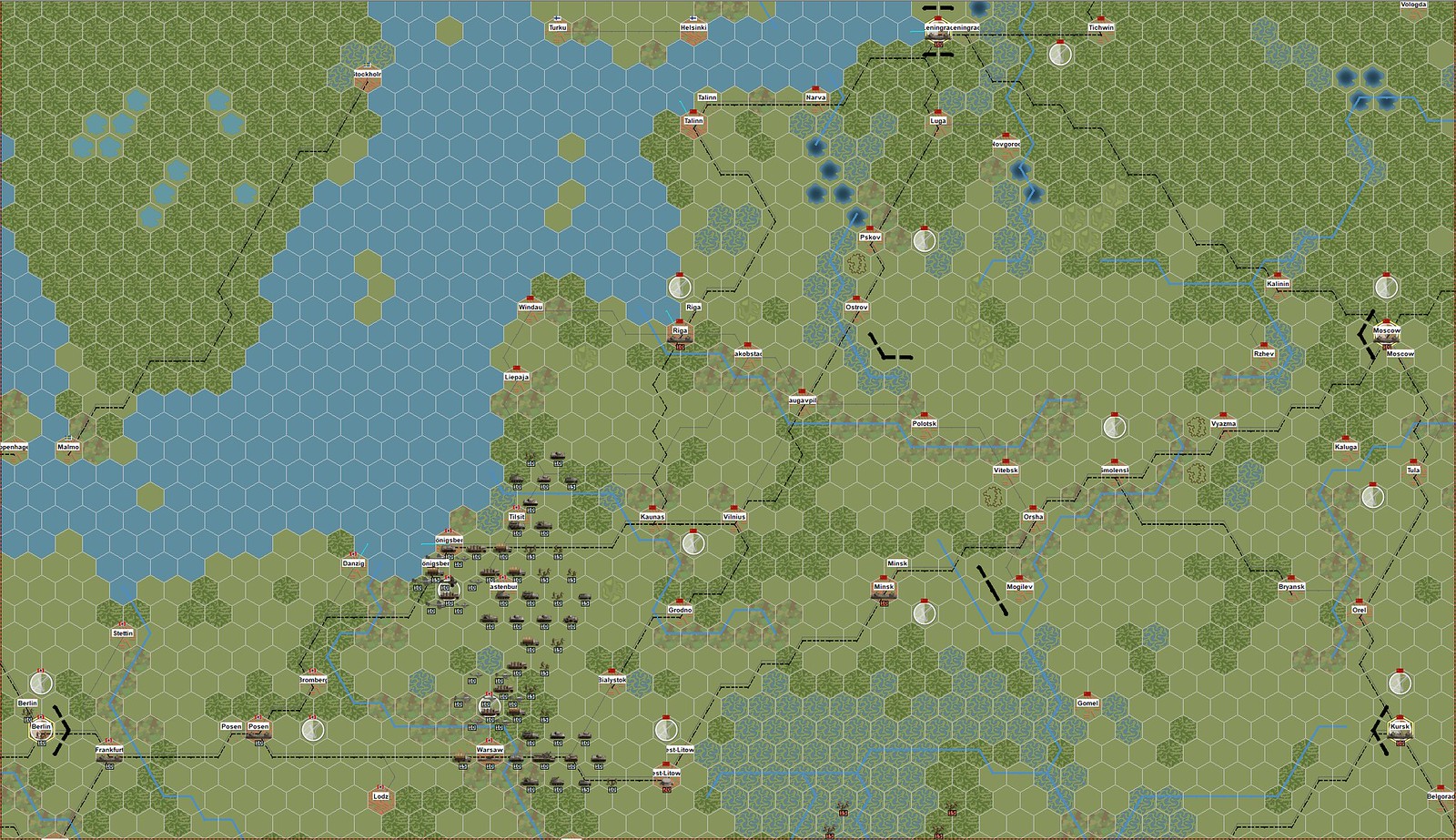 There are a few possibilities for this map:
- 1 vs 1 multiplayer
- 1 vs AI singleplayer
- 2 vs AI co-op (one player commands AGN another commands AGC)

I will focus on a 1 vs 1 multiplayer version first.

If I still have your attention I'd like to bounce ideas around and get your feedback and input on various aspects of this scenario/map.

As part of the design philosophy I want to portray:
A) the need for securing rail lines as the only means of reinforcing with new units (quickly) at the front
B) the feeling of being overstretched and lacking enough resources to secure all the objectives as the German player
C) Soviet numerical superiority in the long term
D) Changes in weather including the Rasputitsa (mud) and Winter (frozen) ground states
E) the element of surprise during the first stage of the battle, in favor of the Germans

Now lets discuss how we can go about accomplishing the above goals within the limitations of the game:
A) Berlin, Moscow, Leningrad and Kursk are the only ground supply hexes to draw reinforcements from (they are also the victory hexes to win currently).
B) German core unit slots should be set to where a good German player may take 1 or 2 victory hexes but feel ever increasing pressure as the Soviet player can reinforce and build up new forces at a remaining available supply/victory hex. Also note that Germany can only purchase ground units at Berlin, while the Soviets have Leningrad, Moscow and Kursk.
C) Soviet to German core unit slots as well as prestige per turn ratio is currently set to a 3:1 ratio in favor of the Soviet player
D) This will require LUA scripting that I may need help with!!! It will require a lot of testing to best determine what turn to change the weather on and how many days a turn should represent.
E-1) The German player gets a solid front line 3 hexes deep to deploy his forces for the offensive. Meanwhile, the Soviet player gets a very unfavorable array of hexes to deploy their initial forces in. I am uncertain how I would portray the Soviet players air-force being utterly annihilated in the initial attack... The Soviet player will be able to purchase and deploy a vast airforce if he wants...hmm...
E-2) Another option is to deploy the players core forces in part or entirety rather than using a large lump sum of prestige to purchase forces during the deployment phase. These units (more so German player) could have higher experience. Deleting/disbanding said units would forfeit that experienced unit. Purchasing new units will have no experience. Meanwhile, the Soviet player would have to make do with his weak initial forces while building up new forces deep inside Russia...

Possible gameplay issues that are easy to address:
- not enough supply hexes to upgrade "obsolete" weapons
- not enough victory hexes
- not enough towns/cities to "unload" reinforcements from trains (I could possibly add village hexes adjacent to many of the cities as a sort of "suburb" so that there is an additional hex to disembark trains)
- core unit, prestige per turn and prestige per town/city upon capture adjustments

A note on airfields:
I took it upon myself to plot airfields for gameplay NOT historical locations. From my time studying airfield locations for making flight sim content one thing was always clear: they were near a rail line for efficient supply. So that is what I have done, plotted them along the major rail lines. I also only plotted the larger airfields to simplify things gameplay wise and to avoid a million dirt airfields.

Let's talk unique units:
- Karl Gerat will be deployed between Warsaw and Brest. Brest will be represented by a ridiculously over-strength "bunker" / strongpoint.
- AGC had a K5 Railgun, so one will be included for the German player
- Both players will start with armored trains. Soviets should get more than the Germans.
- Soviet player will start with X amount of Partisan units. They will not start behind enemy lines. You will have to wait and sneak them behind enemy lines to harass the Germans.
- German player will start with X amount of rear guard SS/Polizei units to deal with said Partisan units.
- Naval units. I have no idea what the Naval situation in the Baltic was during this time. I am unsure to what extent Uboat operations were still going on there in 1941.
- Another idea, regardless of utilizing options E-1 or E-2 as stated above... is to create small groups of highly experienced units. Think German "Elite" units or a Soviet "Shock Army" - to really break through enemy lines. If implemented, the Germans elite units would be at the front, ready to attack on turn 1. While the Soviet elite units would be far behind the lines and need transported, unloaded ect for a counter-attack.

Cities/Towns to make Naval Ports???
- Danzig, Konigsberg, Riga, Talinn, Leningrad (note: Leningrad needs to be expanded or moved to the left one hex so it's by the sea, I know.)

Strongpoints and Minefields:
- pros, creates a formidable way to slow down the enemy advance around your capital for a final last stand
- cons, gets in the way of moving your own units around

Commander Traits and Heroes:
...I lean towards no traits, for multiplayer at least. Heroes could create interesting gameplay. But the randomness of it is unappealing for a long multiplayer scenario... perhaps heroes could be applied to "elite" forces if they are utilized as mentioned previously. This would require LUA scripting that I cannot do. I would need help.

Thanks for taking the time to read, contemplate or discuss this scenario. We really need something like this for the community.

Please drop a line if you'd like to do LUA scripting for weather changes.
Top

I have put in quite a bit more work on the map. The original WIP image in the first post has been updated to reflect various changes.

Today I plotted down the German players starting forces and named them according to what Panzergruppe or Armee they belong to.

This work is simply put awesome!

This scenario is just what Panzer Corps 2 needs at the moment - a lenghty map for complex 1 to 1 multiplayer wrestle.
Top

I've been busy with work, but soon I will have more free time to mess around on this...

I'm not sure how to represent the actions of the naval battles in the baltic... may as well have some naval action since a good chunk of the map ends up being the baltic!
Top

I'm not sure how to represent the actions of the naval battles in the baltic... may as well have some naval action since a good chunk of the map ends up being the baltic!

Do not worry about the naval forces - concentrate on the land action. The coastline is important feature of the land action as well. I think the action on baltics mainly consisted of laying mines and supplying land forces.
https://en.wikipedia.org/wiki/Gulf_of_Riga_campaign
Top

Hmm.. does it add to the scenario seeing all the way to Berlin? I mean, if the map would start from Posen area then maybe it could be constructed with less sea area? Just me thinking aloud loud - the map looks awesome as it is right now.
Top

Eskil10 wrote: ↑
Wed Aug 12, 2020 3:14 pm
Hmm.. does it add to the scenario seeing all the way to Berlin? I mean, if the map would start from Posen area then maybe it could be constructed with less sea area? Just me thinking aloud loud - the map looks awesome as it is right now.

If the scenario is multiplayer, yes. Because for the soviet player to obtain victory they must take Berlin.
Top
Post Reply
7 posts • Page 1 of 1