The Raptor slid through the emptiness of space. Lucinda did not know where they were anymore. She checked Helena’s pulse again with the fingers of her good hand. Still alive, somehow.

“Oxygen is at 27%,” said Clothos, the IL’s hands moving lightly across the pilot console. “I again recommend that we put LSS into preservation mode while I—”

“Keep it where it is.” Lucinda instinctively patted her sidearm for reassurance. “I intend to be awake when we land.”

“That is my wish as well, Admiral.”

Lucinda leaned back, rested her head on the cabin wall. She hurt everywhere, even through the emergency morpha. She dared not look at the ruin of her right arm. A moment of curiousity. “What do you want, Clothos?”

“To complete my work,” replied the robot without hesitation.

“Beyond that. Beyond your mandate. You never meant for Lachesis to wake up, did you?”

“I wanted our threads entwined, unspooling indefinitely.” More button presses. “Think of the worlds we could have made with time and small sacrifices. Some human, some Cylon, all for a stronger existence before God.”

“That’s not how life works,” said Lucinda. She sighed heavily. “You don’t get to sacrifice some of us to make it better for everyone left over.”

“So instead you shackle and torture the many to uplift the few. Do you remember much of the early war?”
Hindsight hit hard. Soldiers had been killed, but in those early years, no one died surprised.

Lives below continued, even flourished, while they had fought up above. “It felt like an elaborate game.”
Her shame deepened. “Until Picon.”

“Picon was my greatest mistake.”

Lucinda raised an eyebrow. “You assassinated half of Fleet HQ. Forced us to put Daidalos into play. It put the whole Jupiter project at risk. How was that a mistake?”

Clothos flicked another lever. Levels adjusted. “It created you.”

It was getting harder to stay awake. Lucinda blinked, looked around the cabin. The fighting on Daidalos was finally taking its toll. Something continued to bother her in these moments of honesty.
“Why save us? Why risk yourself for her?”

She couldn’t hold out any longer. Lucinda closed her eyes, and unconsciousness finally took hold. Only then, in solitude, did Clothos reply.

You may have seen the recent announcements of not just one, but two new expansions for Battlestar Galactica Deadlock! (In case you haven’t, you can find out all about the new Armistice expansion and the Modern Ships Pack).

Along with these expansions, we’ll also be releasing the Daybreak update. a free update that includes a host of new features. We’ve talked previously about Photo Mode (the images in this post are all Photo Mode images, captured during the beta by some of our beta testers) and 3 new skirmish and multiplayer modes. However, a feature we are excited to talk about today is the increase to fleet sizes for your skirmish and multiplayer battles.

Starting with the Daybreak update, PC players will be able to create fleets with up to 10 ships, with two new fleet point tiers: 12K and 16K. Console players can create 8 ship fleets up to 12K fleet points. (The lower limits are due to hardware constraints on the base systems.)

You might be wondering whether larger fleets are available in campaigns. We decided not to support larger fleets in campaigns, due to the inevitable balancing issues this would cause.
As well as the base game campaign, there 3 full campaigns, and the extra missions in Broken Alliance. We felt that attempting to re-balance all of these campaigns across 4 difficulty levels presented too much risk of throwing out the balancing we’ve spent years getting where we want it. 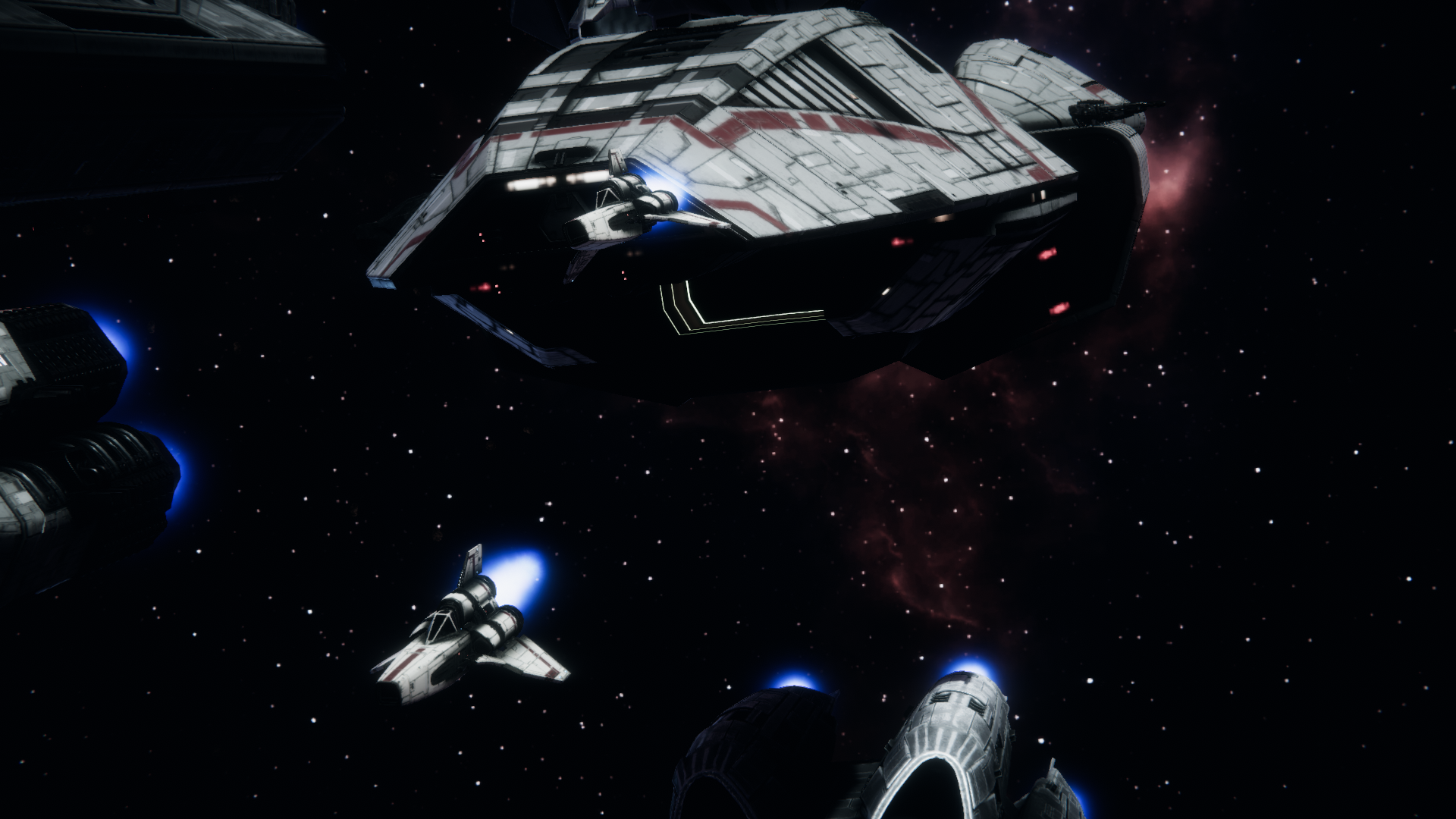 Over the years, we’ve had a lot of requests for ships to add to the game. Adding ships that are clearly part of the 1st Cylon War, such as the Berserk or the Orion, were no-brainers.
Whilst we’ve had a lot of requests for the Mercury , due to the timeline, we haven’t been able to add it in. With Season Two wrapping up, we thought about how we could include it, and the other awesome ship designs from outside of the First War era, without breaking continuity.

We eventually settled on releasing these modern ships as a single ship pack, with a focus on skirmish and multiplayer. In these non-narrative modes, the setting and timing aren’t beholden to the continuity timeline, so having a Mercury-class battlestar take on a fleet of Talons and Revenants is fine (and encouraged!).

The Modern Ships Pack will contain the Mercury , Valkyrie , Modern Basestar , Hybrid Basestar (as seen in Razor ), the Viper MkVII & the Modern Raider . They don’t come with a campaign and are not intended to be used in the First Cylon War campaigns. 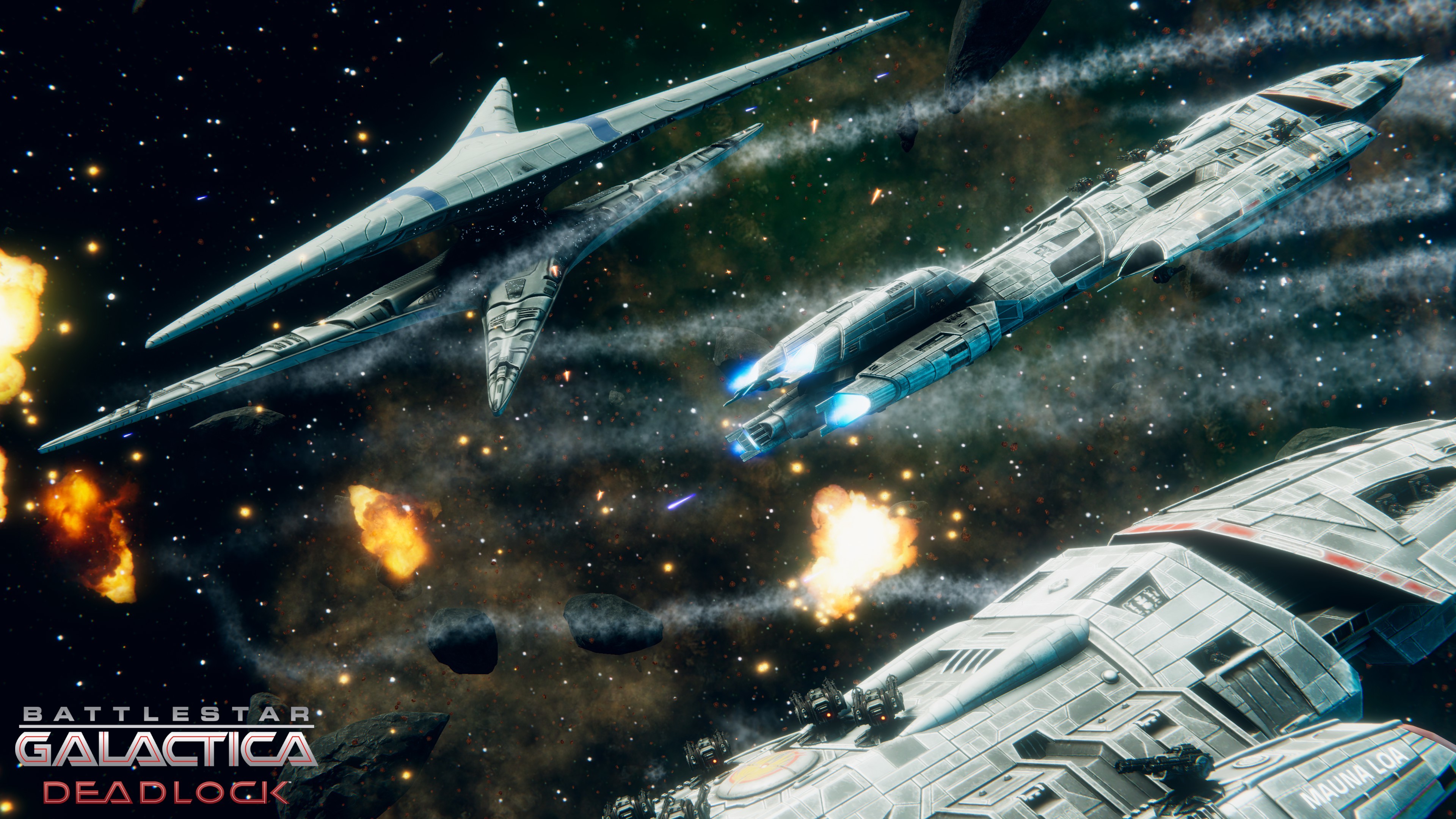 However, we did decide to allow modern ships in Anabasis. Whilst the backstory for Anabasis is set in the First Cylon War, the narrative isn’t really the focus, and as Anabasis is all about protecting civilians, having the Beast and the Bucket shepherding colonists to safety was an opportunity we couldn’t pass up!

Armistice , Modern Ship Pack and the Daybreak update will be available on September 24.
Top

Right so some of these decisions for the final update were wrong and very unfortunate. Another small update should be released to address them. Without some of these things the game has no long term replayability.

Many people like myself play the game just for the campaigns. A game setting should be added to allow players to use whatever ships in whatever campaign they want.

Also a sandbox mode with all ships available on the original Cyrannus map.

There also should be added an option to increase the Fleet cap limit in your campaign. It was a REALLY bad decision to not at least include this as an option. Obviously it probably won't be balanced and should have a warning on it, but it definitely should be added. https://www.slitherine.com/forum/viewto ... 9&t=101137

A "enemy fleet randomizer" option should be added to the skirmish mode.

Another small thing that should be added as an option is the random battle deployment altitude adjuster. Currently the enemy often spawns far below your altitude and it makes the whole battle a goofy and annoying race to the bottom. https://www.slitherine.com/forum/viewto ... 9&t=104650

An option should be added to allow the Jupiter to be equipped with Mk7 Vipers.

An option should be added to allow the Valkyrie in the Ghost Fleet.

Also, I really think an alternate version of the Mercury class Battlestar should be added as an option. The current version is really underwhelming compared to the reboot show version.

It would be really nice if the Mk3 Viper and Stealth Viper and modern looking Heavy Raider were in the game. Big pet peeve of mine that the game doesn't have a model for the Heavy Raiders from the reboot show.

A slight cost reduction of the Jupiter Mk2 so you can finally have all 4 Battlestars in your Fleet.

A formation lock button to keep everyone in position when moving.

A speed control for the Action Phase.