Take up the role of a great wizard, wield powerful spells, command fantasy races and challenge your rivals in this remake of a cult turn-based strategy classic. Do you have what it takes to become Master of Magic?
Post Reply
6 posts • Page 1 of 1 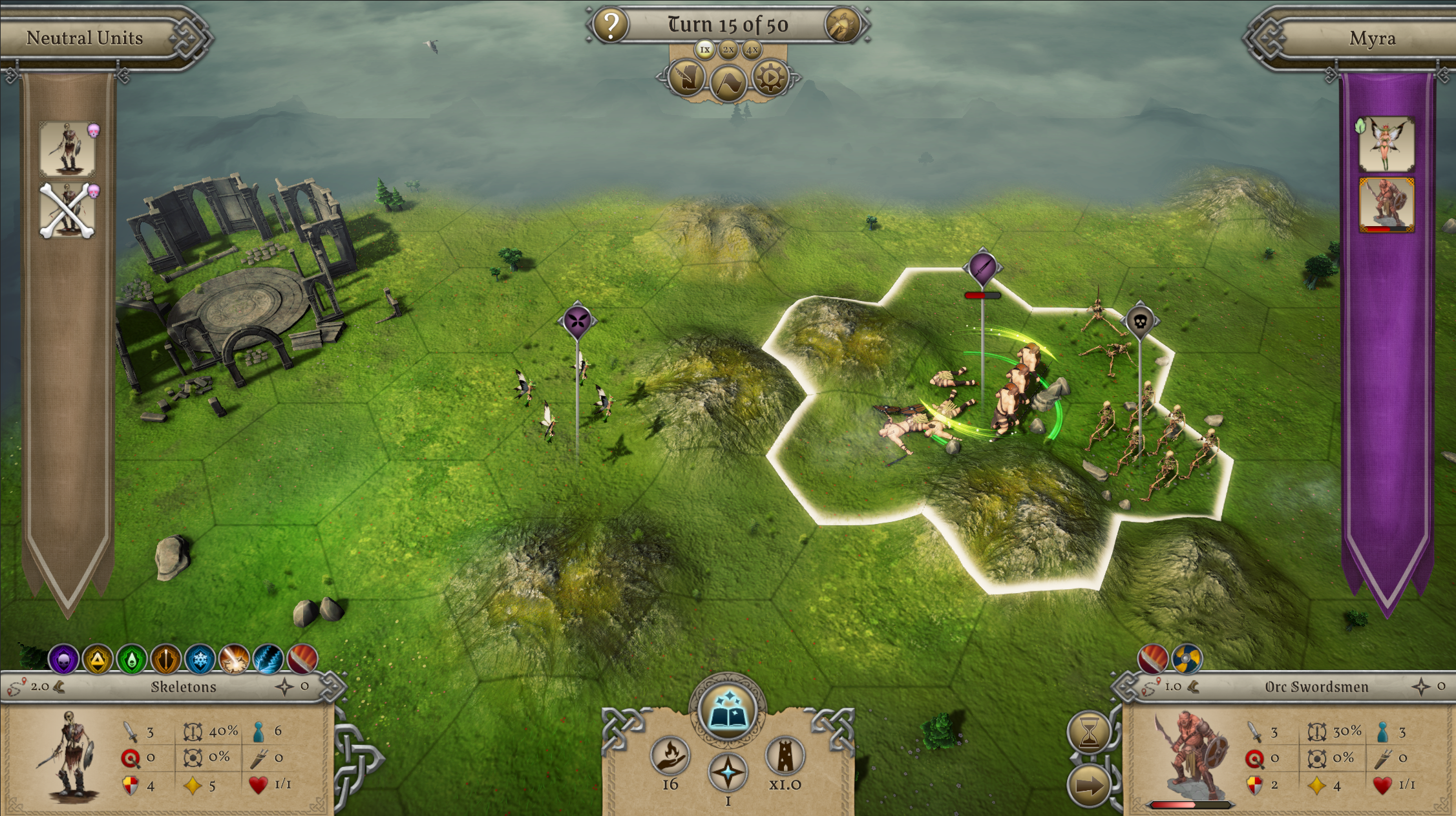 The battle map now includes less flat surfaces and the appropriate location model to make them more interesting and immersive.

So, we’re at the end of July now, and I am sure you’re all wondering how things are progressing, right? Well, things are going well. We are producing regular patches (8 big ones so far) to catch bugs as well as modify features due to feedback and/or add new ones.

Our biggest hurdle remains firmly in the AI behaviours. While the AI at the moment is learning more and more complex tasks and combinations, and in the weeks to come, we will hopefully have it become more and more aggressive and proactive towards the player.

But for now, we come across such odd diplomatic conversations: 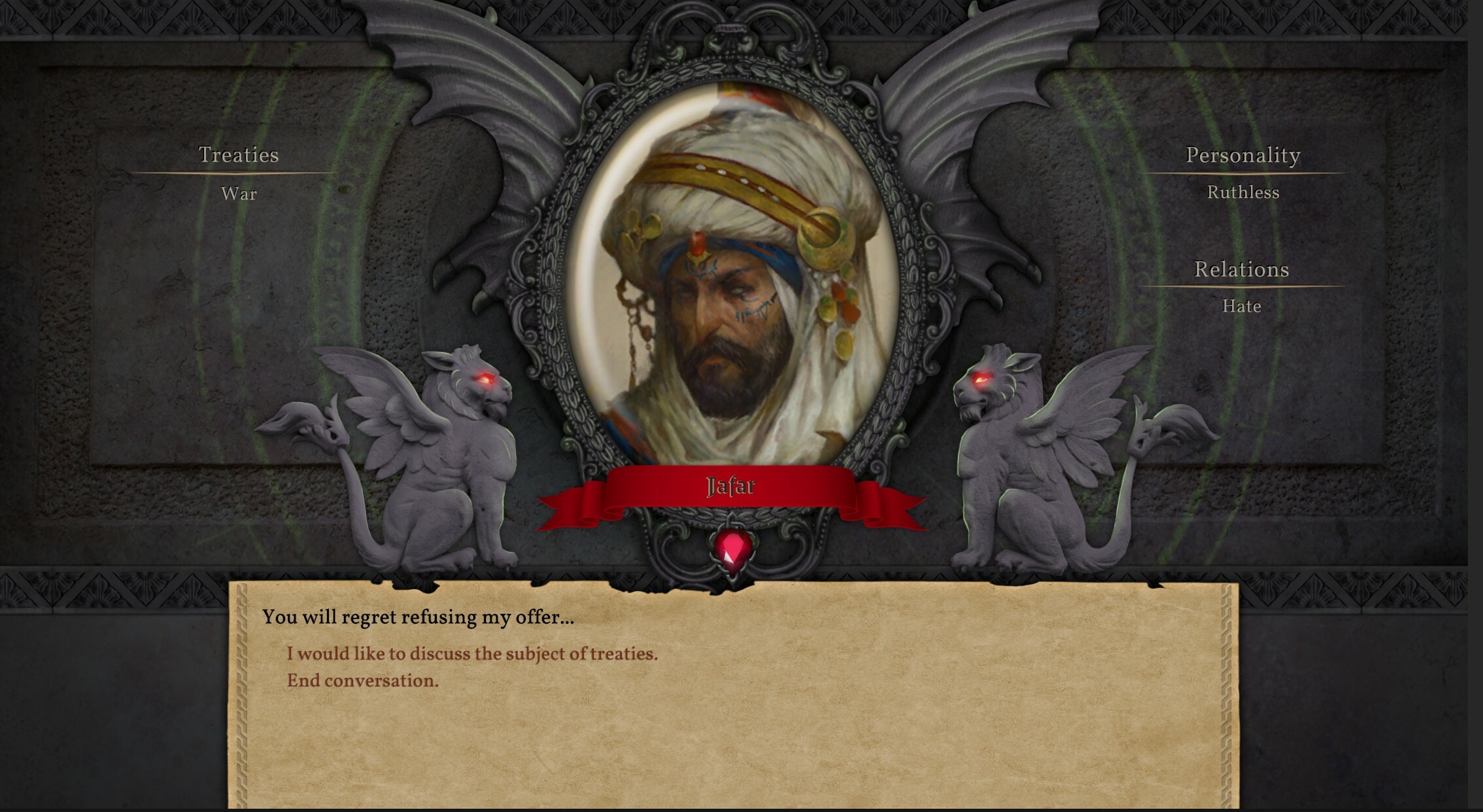 I mean, I did not declare war on him, and I certainly did not refuse any offers, maybe I accidentally said no to a date, or something, and he’s upset now? Don’t know, but he is angry...

What’s new in our Master of Magic?

I’ve had a few questions on social media in regards to what we’ve changed from the original, so I’ll try to give some examples here. We do not have a list that we can share, as many of the changes happened organically, so while trying to implement a thing, it needed to be changed because it did not work with our systems; or, feedback and ideas leading to new features, etc.

So spells are one of the things that we tried to copy almost 1:1, but inevitably, there are things we could not duplicate. All of the original spells from Master of Magic are in the game, but some have changed mechanics. I’ll discuss the few examples I can think of:

Web
Original web - Web is a Common Nature Combat Instant. For a base cost of 10 Mana, it may be cast on an enemy unit during combat to prevent that unit from moving or attacking for a while. If the target is a flying unit, it will also lose this property until the end of the battle .

New Web - A strong spider's web tries to entangle the enemy. Target unit gets -3 resistance and may be immobilised (D10 roll - current resistance the result = number of turns active, but the minimum is 1). Web also prevents flight for the rest of the battle, even if it did not immobilise its target.

The reason for the change was that we did not have the mechanic to handle the original design, in terms of it being immune to resist rolls. We had many talks about how to best imitate the original with what we could do, and after a discussion with our beta testers, this was the compromise that was reached.

Flying Fortress/Fortress of Flying
Another such spell is Flying Fortress. In the original, the spell made the town and all its defenders float, and thus, the spell's effect is to prevent Walking and Swimming units from entering or leaving the town limits during combat.

Our version has been renamed (fun fact, it is actually the only spell we renamed, I think...) to Fortress of Flying, and it now gives all of its defenders the ability to fly. Again, the change was made because it would be very resource consuming to try and emulate the original mechanic 1:1, it would also potentially require additional graphics changes on top of the correct mechanic. So, in the end, our solution was to keep with the spirit of the original - making it harder for non-flying units to conquer a city. 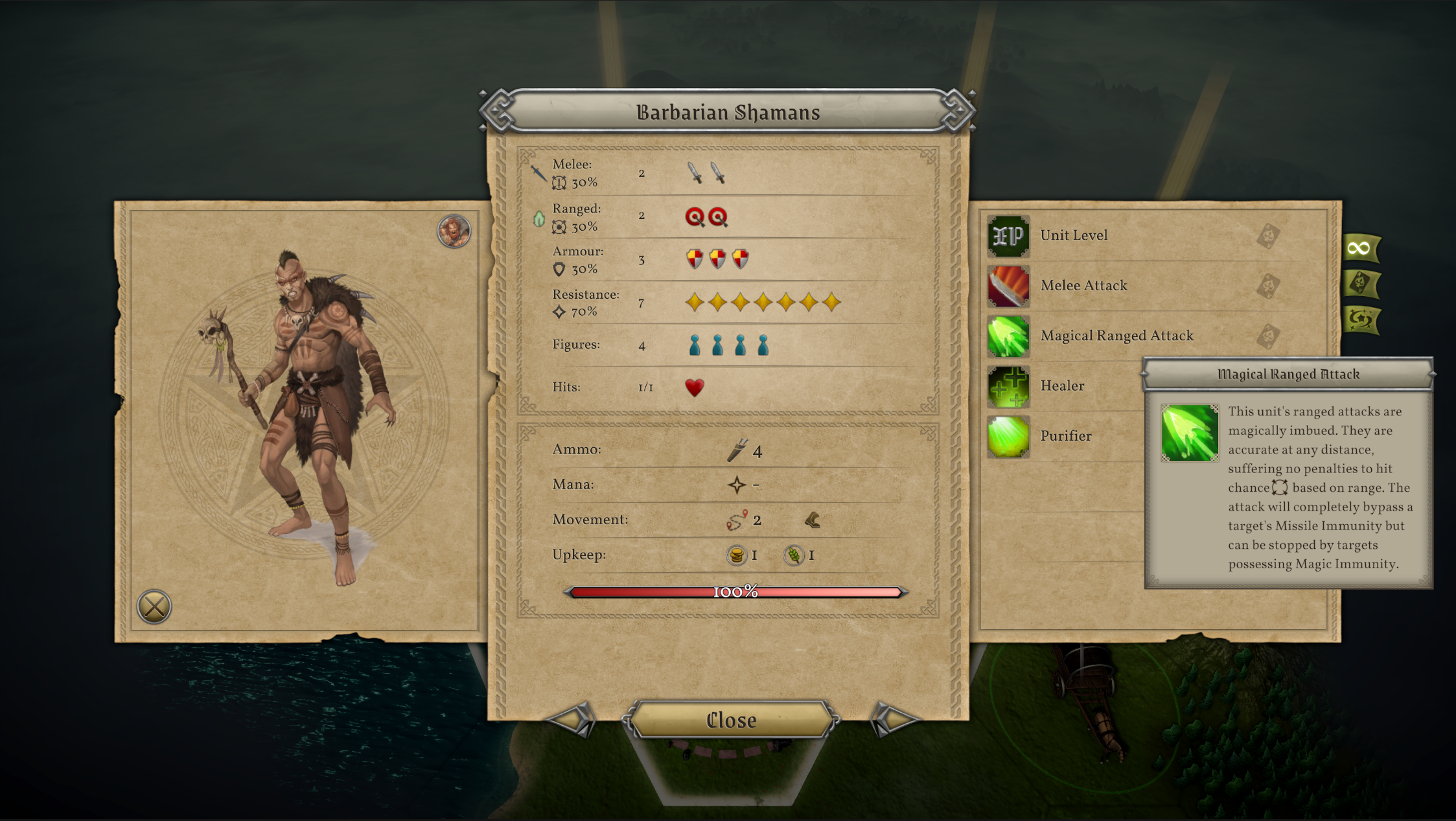 One of the most talked about feature changes was actually movement points. When we started Beta, back in May, the movement points for all units were doubled. This did speed up the overland exploration quite a bit, but we soon discovered we had not fully considered the knock on effect this would have, especially on battle tactics. Ranged units were particularly affected here, as they could now move quite a bit and then still shoot in combat. Some of the more powerful creatures that were originally slow but dangerous, also got, well, more dangerous with that extra speed.

So, after a lot of talks with the testers as well as the team, we reverted the changes to adding +1 movement to all units, with exceptions of +2 movement to such units as settlers, engineers, ships, heroes, floating island and non-flying mounted units(mammoths, beetles, turtles). In addition, non-magic ranged units were given +1 to ranged attack, to compensate for the range penalties as enemy units can now run further away.

And, one of the sticky points that we’ve tried our best to resolve via dialogue with our testers as well as our own design ideas, is the hydra. After many talks and ideas, we decided we are unable to emulate its original 9 figure mechanic, but instead, we worked hard to give our Hydra more robust statistics so that it remains a strong and interesting fantastic unit. So our hydra now has an impressive melee attack of 15 and 45 hit points (in comparison to 6 attack and 10 hit points in the original) which we hope compensates for the multiple vs one figure change. 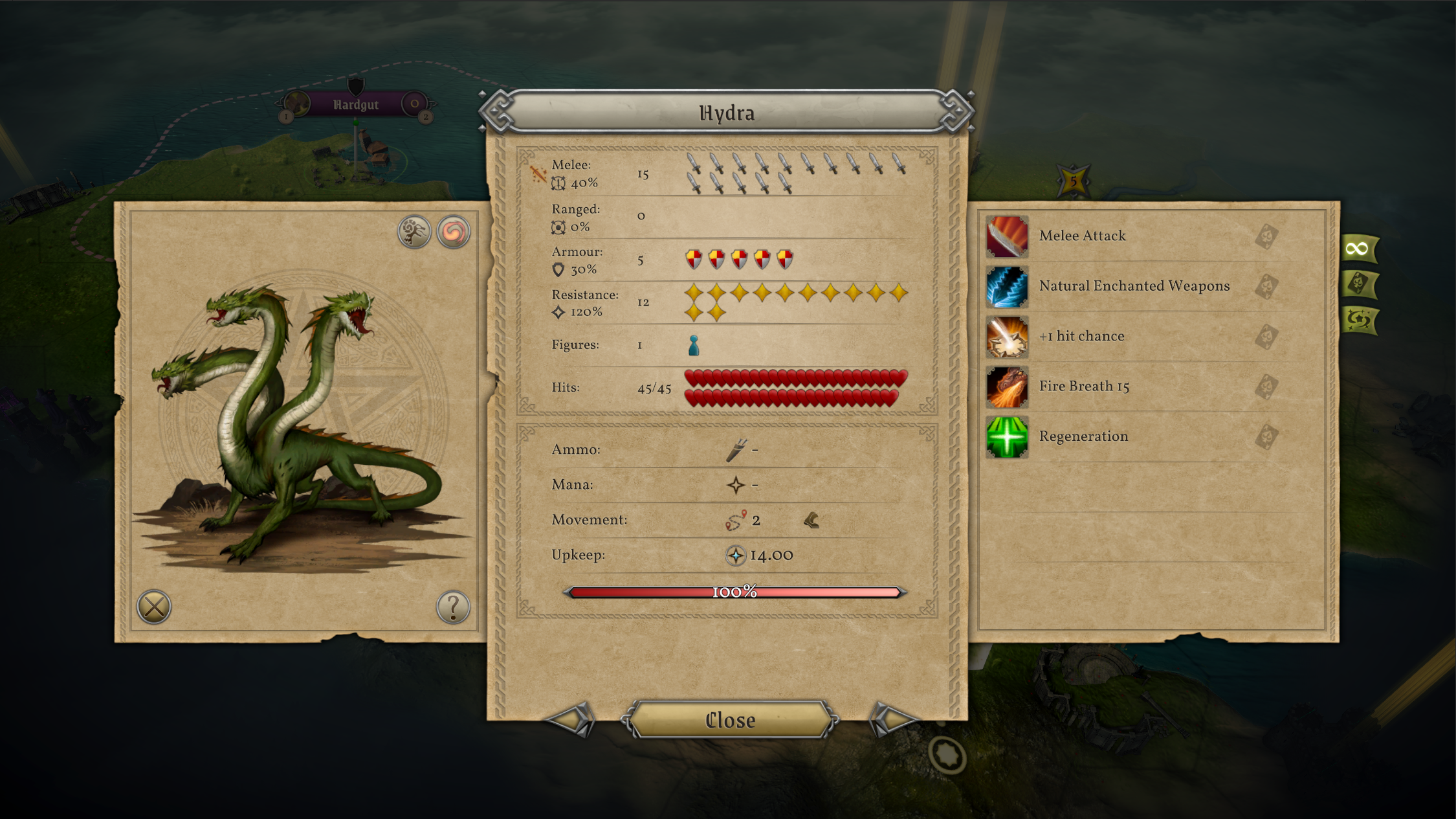 Below I shall also mention a few things our wonderful testers added to the list of changes and stuff they wanted to talk about in the dev diary.

So, in the spirit of every little helps, we have the: Dethstryke the Swordsman had an axe but he has been fixed and given a sword - I mean, it ain’t much, but it shows we care, right? 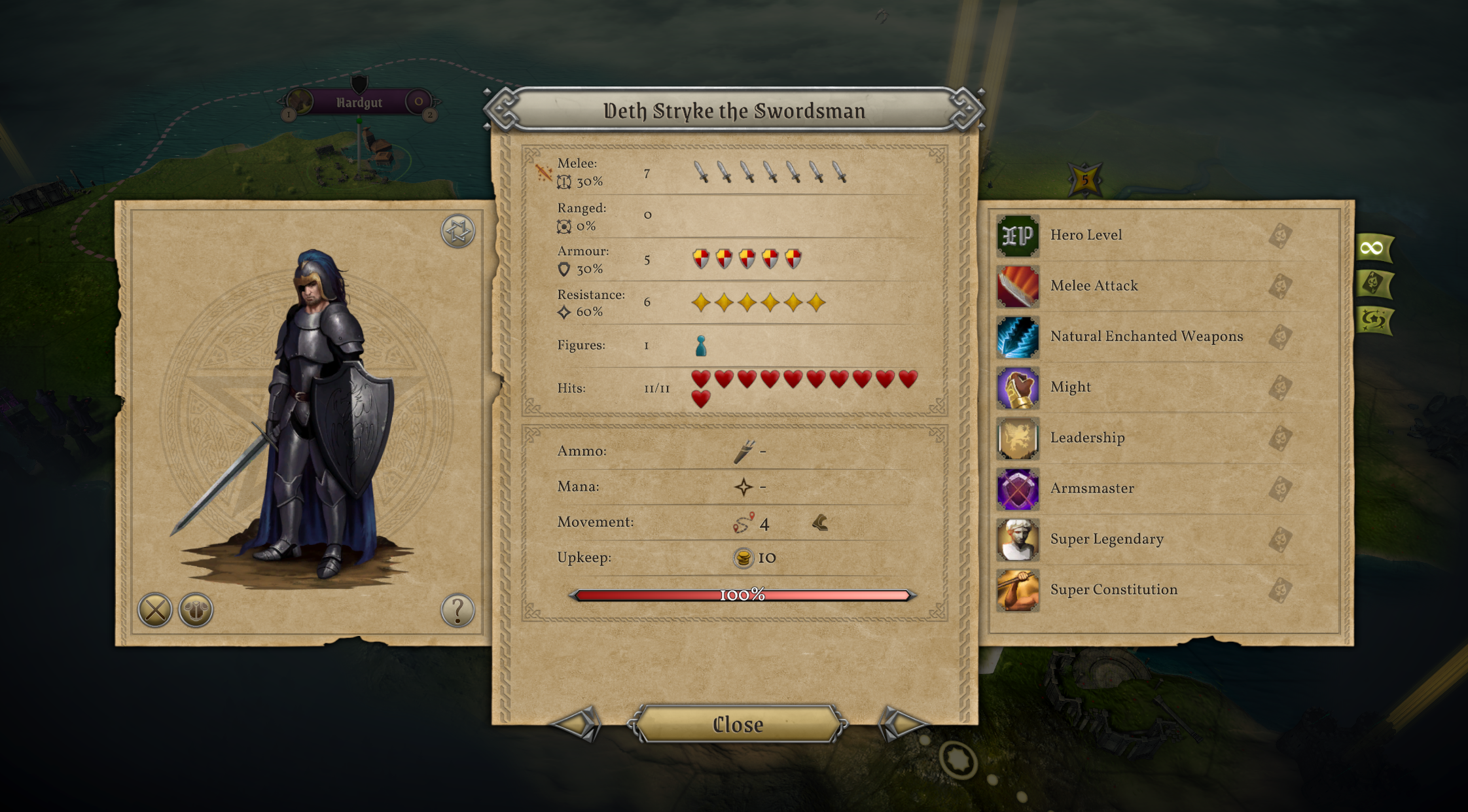 Amongst some of the memorable bloopers we had so far, we had the inexplicable, yet somehow lore appropriate gaps in reality where Myrran cities could be seen on Arcanus and vice versa... Or, our draconians were so into the fact that they can actually all fly, they decided that building shipyards is for wingless fools only. We also had like really polite raiders, where if you were defending a town and got attacked, you chose to flee, because you knew you would get murdered, and yet, the nice fellas would let you stay in your city after you flee, effectively, giving up their sure victory... 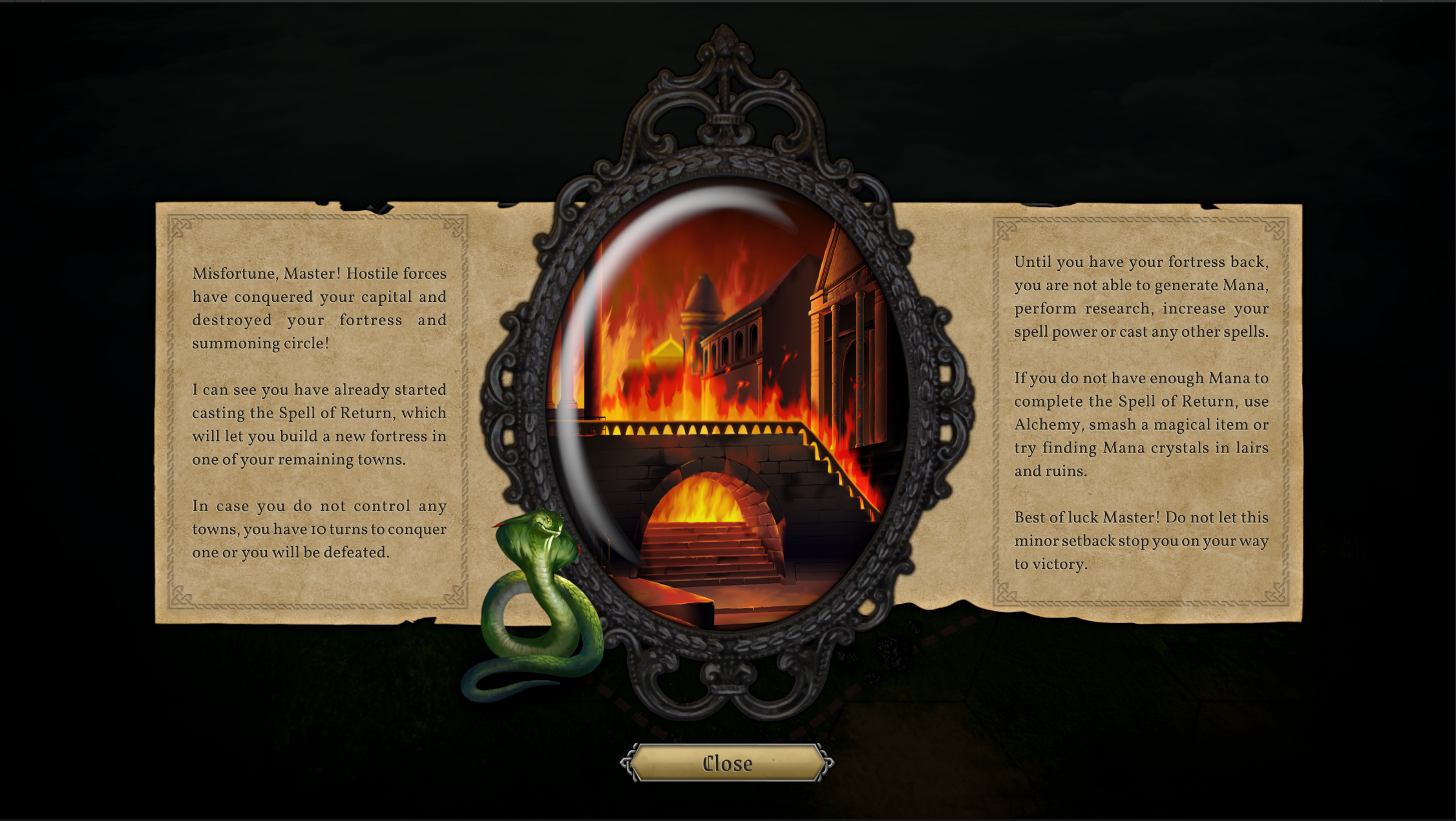 I can’t give you a detailed one, but let me try to map out a few things we have planned for the coming weeks: Out of development, we’re also working on some things for the marketing team, as well as putting together a game manual (yeah, that was fun to do, considering the complexity of the game...)


Thanks for your patience and stay tuned for future updates.
Top

Well Done! Thank You for the update.
Top

I am fiending with anticipation of the release!

That being said.... do you have an idea of when it will be released? Ballpark? Last quarter 2022? 3 years from now?

Will the editor include combat, too? I mean, can I create my own battle map?
Top

The graphics look better and better! I hope you release your game soon.

I still believe the UI would benefit tremendously from having slightly colored "titles" of the various frames. But it's your game and you have to make that decision.
Top

Development Diaries are nice, but when is the release date??

We are just about to enter early Fall, which is the only release date I am aware of.