The first Field of Glory II (Ancient + Medieval) Team World Championship sponsored by Slitherine will start in September 2021.
The event is open to everyone, so if you want to represent your country you can contact the tournament organizers at this link, leaving your username and nationality in the comments:
HERE

The teams will consist of 4 players up to a maximum of 6 (2 reserves). Many nations are still looking for a last member of the team, so if you think you are up to the competition, don't hesitate, registration will close on August 13th. 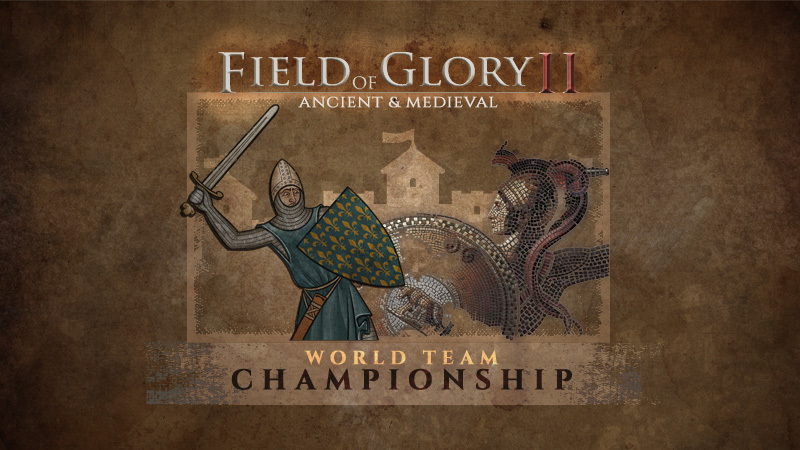 This is a team competition, so it is the responsibility of the team captain to make sure that all players understand and adhere to the rules.
There are always unforeseen circumstances which may prevent you from finishing matches. However, entering this competition means that you will complete all matches. Failure to do so will not only affect you but your whole team.

The organisers will assume that everyone read these rules and that all the points contained within it are fully understood.
Please make sure you are allowing notifications to be sent to your email address.

The organisers will intervene on the basis of these rules where necessary. If you should need clarification on anything then please ask by posting your question on the forum page
or by sending a PM to XLegione or myself.

Each team will have 4 players. Each player plays in a specific period. The WTC will consist of 4 periods:


2. Joining the WTC and selecting your armies


3. Participation in the WTC

Players must register one result within two weeks of the start of the group stage and three results within six weeks or they may be replaced by a player from the reserve list.

Either player may initiate a match by posting a challenge in the appropriate thread in the competition forum and by sending a PM to their opponent.
All matches will select "Open Battle" for the scenario type. All battles will use 1200-point armies, players will choose a “Medium" army and a “Medium" battlefield, Potluck terrain and 24 turns.

If a match is set-up incorrectly for any reason, then it must be re-started as soon as possible.

Both players must agree to restart a match within the first three turns if they believe the terrain is likely to produce a sterile match or a draw. The maximum number of re-starts permitted for a single match is two.

Reporting the result of a match is the responsibility of the winning player. If you are a losing player and notice that the result has not been posted after three days, you should post the result yourself. The team captain will also be responsible.


4a. Group Stage and Knockout rounds

There will be a random draw made for the group stage.

Points will be awarded as follows:

A draw will occur where neither army has broken by the match turn limit (24 turns), or at any point in the match by agreement between the two players.


6. Player etiquette and withdrawal from the league

Please treat organisers and other players in the way that you would wish to be treated yourself. Please visit the Field of Glory 2 forum regularly and log in to see if there are any messages for you. Make sure you have your notifications on. Try to respond to communications as quickly as you can and once you have started a match play at a regular pace so it can be completed within a reasonable timespan. It is expected that each group stage/KO matches will be completed within 2 weeks of their starting date and for all group stage matches to be completed within 6 weeks. Matches that are not completed will be adjudicated by the organisers. We would require screenshots for this.

Please do not resign a match if you are less than 15% behind your opponent. Failure to follow this rule may affect your future entry rights.
Please notify the tournament organisers if you are unable to contact an opponent to start a match after 4 days have elapsed.

If your opponent has not moved at all for 4 days without explanation then you are entitled to claim the match automatically by using the multi-player in-game facility provided and contacting the organiser with the proof required.

If you wish to resign from the league, or if you will not have time to finish all of your matches, please notify your captain and tournament organisers as soon as possible. Hopefully, your team or the organisers will have a reserve player who can start immediately. If you have not completed any matches in the group stage your record will be removed completely.
Top
Post Reply
1 post • Page 1 of 1