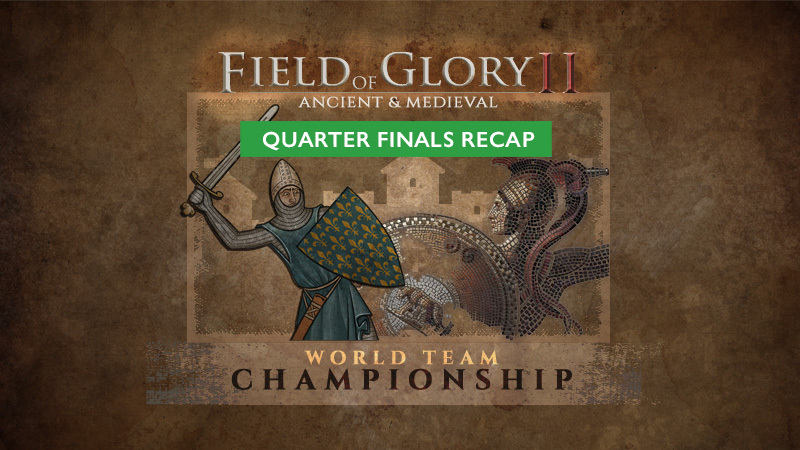 It was a very intense and exciting quarter final, we had some huge surprises and also confirmations about the potential candidates for the final title. Let’s see what happened: 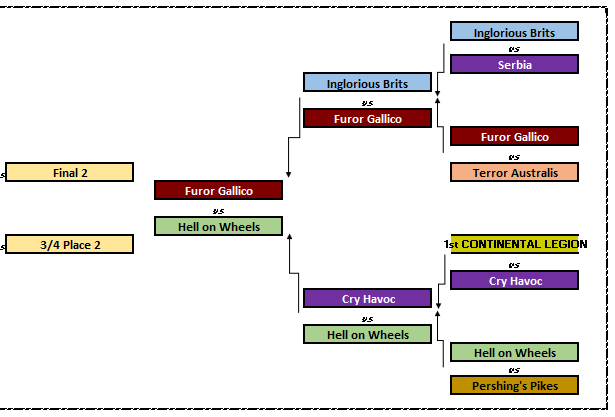 Furor Gallico also knonw as “The blue Celts” won the challenge versus Inglorius Brits, the result was 10 to 6 for the French team, 2 victories, one loss and a draw gave the green light for the semi-final to the Celts.
Vercingetorix is proud to see his warriors prevail against the romans… ops there is a mistake, Brits were also Celts…. In this case, instead of Vercingetorix, may Napoleon inspired the Blues.
The heroes of the turn were, ramdom27 and Sennacherib, interesting to read the short report of the battle wrote by Sennacherib:

“Polish army was happy to find a good defensive position on his center and right flank that the inglorious Wellington will have approved !
Murabits were cautious a few turns before lauching a massive attack on the polish left flank, after hard fight and some bad moves the principal attack was repulsed, Polish take the offensive and manage to destroyed the infidels.
Ianiow you deserve to be a French on this one! “

In the second quarter final there was the challenge between Cry Havoc and Hell on the wheels, the red coats vs the american rebels, in this case the history did not change: the american rebels gained their indipendence from King George. It was a real balanced challenge, the result was also influenced by the game not finished between pbuck77 and Triarii. In the end the americans won thanks to score advantage percentage. 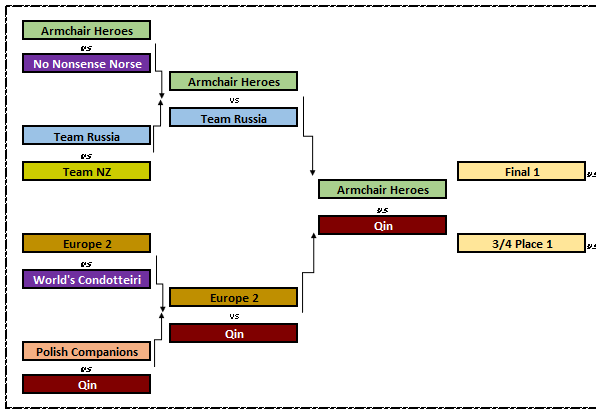 The most interesting quarter final in the lefthand was the challenge between the Russian battleship and the Armchair heroes, to be honest we thought that the russians were favorite but….. we know the valor of the red thin line…. Wellington would have been proud of his ladies, with a brilliant victory 12 to 4 the red coats sunk the presumed unsinkable Russian battleship.
Eridoman, lydianed and Captainwaltersavage with 3 brilliant victories made the difference, the honour for the Russian was saved by the unbeatable Nosy_Rat.
Here the battle report written by Ericdoman, the drama of the moment is evident in his words:

“The map was once more quite open and once more we deployed on the opposite sides. The first heroic defence of the game was from some Etruscan armoured hoplite, who did not rout until a few turns had passed and slowed down my advance on the left. If it had routed my elephant general would have probably pursued into a close order superior warband. Which leads me onto the second heroics. The elephant gen did not and the superior warband charged a pike general of mine in the flank. The Pike general only disrupted and was now fighting 3 units. He held and until a Thureophoroi unit charged into the flank of the imitation legions fighting the pike unit and the combination, finally routed them which fragmented the loose warband unit facing the pike gen. The pike gen finally routed but had held on long enough for me to be able to attack Questar's main line in the rear and win the game. A tough game and a bloodbath”

The second quarter final was between the Chinese Team Qin vs Europe 2, the brave European players did their best but was not enough, the superiority of the Chinese dragoon crushed the enemy defense, final score 11-1 for Qin Team. The short report written by Wzfcns about his battle vs Blagrot is of significance.

The heavy knights overwhelmed the Baltic's right flank and center with a devastating charge, but the Baltic stubbornly resisted and rally several times leaving the battle heading towards confusion for a time. The German City Knight returning from behind the Baltic lines delivered the final blow that ended the battle.

The program of the semifinal includes:

Furor Gallico vs Hell on the Wheels, in other words France vs USA
Armchair Heroes vs Qin, UK vs China