All of my practice games up unitl now have been using the 1813 French versus 1813 Prussian lists. So far it's been hypothetical, but, for a change, I decided to model some actual corps from 1813 and settled on the fighting around Mockern (Battle of Leipzig) on the 16th October. It's somewhat bigger than a corps versus corps, but not by much.

Here's my go at the scenarios, which was inspired by one of the scenarios in the Napoleon's Battles scenario supplement. I'll provide the French Order of Battle in this post and will add the Prussian/Russian later as well as a map. I'm sure the Orders of Battle will change once the first volume of army lists come out within a month, but I've tried to use, as much as possible, the lists in the rule book. It seemed to mostly work.

The French have Marmont's VI Corps reinforced by Dombrowski's Polish division and later on in the day by a division from III Corps (Delmas). Plus the French have Arrighi's III Cavalry Corps, but it was spread out in bits to provide cavalry support to the various corps / divisions, which is consistent with the restrictions in the 1813 French list, but I’ve added a lot of officer attachments to reflect the missing cavalry commanders. Where I've made exceptions to the list, I have noted them.

Artillery: The information I’m using (mostly Nafziger) shows 16 medium artillery for each of the 20th, 21st and 22nd divisions, 12 medium artillery for the 9th division, 4 foot / 4 horse guns for the 27th division, 3 half-batteries of horse artillery distributed with the elements of the III Cavalry Corps and VI corps reserve artillery of 3 heavy batteries and 2 horse batteries. That could be represented by 4 small medium batteries, 1 large heavy battery, 1 small horse battery and 1 artillery attachment (27th Division) while ignoring the horse artillery half-batteries for a total of 14 bases of artillery. I decided to go mostly go with the 1813 list but I upped the maximum number of non-attached artillery bases from 8 to 10. Another option would be to have 1 artillery attachment for each of the 5 divisions plus 1 large heavy battery and 1 small horse battery (10 bases).

Note: 22nd Division – I’ve treated this division as a reserve division by adding an extra cavalry unit to the division plus the heavy artillery.

Summary of Exceptions to the 1813 French list in the rule book:
Max 5 division commanders instead of 4
Max 10 Chasseurs instead of 6
Max 10 artillery instead of 8
Polish infantry and uhlans added as an optional troop types (but maximum consistent with maximums in the optional list - i.e., up to 12 averaged drilled non-French, and 4 non-French cavalry)

Nice. Historical organizations have a wider variety in size and composition after mix and matching and attrition on campaign. The 27th Div looks rather thin. Was it worn down by losses or were there detachments elsewhere? Which raises the question of including detached units in historical OOB but with a note as to status.
Top

MikeK wrote:Nice. Historical organizations have a wider variety in size and composition after mix and matching and attrition on campaign. The 27th Div looks rather thin. Was it worn down by losses or were there detachments elsewhere? Which raises the question of including detached units in historical OOB but with a note as to status.

When the 27th Division was detached from the VIII (Polish) Corps, one of its 2 infantry brigades was left behind and attached to the 26th Division / VIII Corps. However, it was given a cavalry brigade from the IV (Polish) Cavalry Corps. Individual regimental and brigade strengths aren't given, but the overall strength for the 27th division (after all the detachments-attachments) was 2,350. The IV Cavalry Corps is supposed to have 3,000, which equates to 375 per regiment for its 8 regiments. The brigade attached to the 27th Division has 2 regiments (2nd Polish Uhlan and 4th Chasseur) which should be about 2 X 375 = 750 troops. Subtracting that from the 2,350 means 1,600 infantry which equates to 400 per battalion for the 4 battalions in the infantry brigade. That's pretty good averages per unit. The 27th only has 4 infantry battalions and 2 cavalry regiments (8 squadrons). In comparison the infantry battalion strengths while the other 4 divisions all have 14 battalions each.

Quite a different Corps – units are loaded up with attachments

Corps and Cavalry Reserves could be attached to different brigades. This is just one option.
Last edited by shadowdragon on Fri Oct 26, 2012 6:50 pm, edited 1 time in total.
Top

*Note: Nafziger only shows 1 position battery (12 guns) and 1 horse battery (12 guns) for the IX Corps. Apparently there were a number of other batteries around but there was no information on where they were deployed / attached. 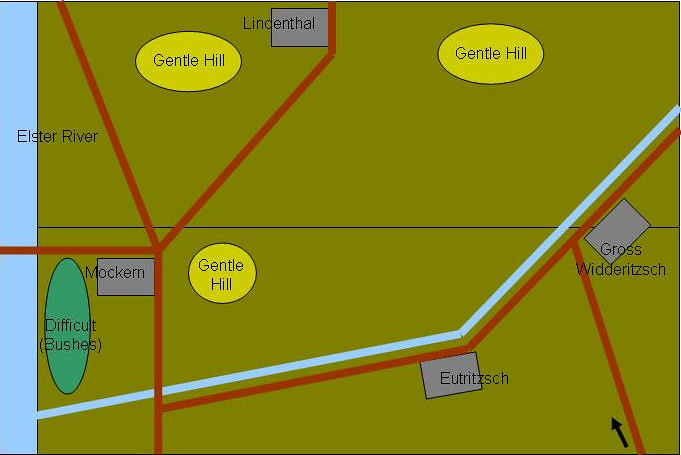 The 6 X 4 map is entitled "Mockern Map" while the larger on states that.

The game starts at 2:00 PM. The fighting continued into the late evening, but since it was October probably it should finish by 7 PM.

French Deployment:
The 20th, 21st and 22nd divisions deploy between Mockern and Eutritzsch, while the 27th and 9th divisions between Eutritzsch and Gross Widderitzsch. The infantry and artillery of the 9th division arrive on the road with the arrow next to it at 4 PM.

Modified OOB based on ToN Supplement

Using Triumph of Nations, I've modified the OOB. Here is the French list which now has 2 corps (1 infantry and 1 cavalry). The list was made to comply strictly to the ToN lists which required only minor adjustments (i.e., assigning 1 chasseur cavalry unit from III Cavalry Corps to VI corps, and the VI corps horse artillery to III Cavalry corps)

Corps Cavalry (2 units both to be assigned to one of the above divisions to create a mixed division):
1 large Württemberg Light Cavalry (average drilled)
1 small Chasseur (average drilled) - unit detached from III Cavalry Corps
1 officer attachment

Sector Commander - Ney (Skilled Charismatic) - Serves as commander for III Cavalry Corps but, optionally, can be allowed to allocate command points to Marmont as well.

Artillery (to be assigned to the above divisions):
1 small Horse Artillery (average drilled)
1 artillery attachment

After bahdahbum pointing out that X corps should be involved in the fighting and considering the resistance of the outnumber Poles I've re-done this list so that Langeron's wing is an "infantry corps" with 2 infantry and 1 cavalry division. The Empire rating for Langeron and the corps commanders is "poor", so none are rated higher than "competent" which helps reflects the inability of Langeron and his subordinates to effectively employ their numerical superiority.

Notes:
1. The above artillery strength assumes that 3 heavy position batteries of X Corps (36 guns) either are not deployed or only reach the battlefield later on the 16th.

Surely you'd rate Jean-Dominique Compans as better than merely 'competent'? (even allowing for his rather despicable conduct in 1815).
Top

Greenjacket wrote:Surely you'd rate Jean-Dominique Compans as better than merely 'competent'? (even allowing for his rather despicable conduct in 1815).

Reasonable point. Changed above. One could even argue "charismatic" but the list allows the corps to have only one charismatic commander, which I've given to Marmont - even allowing for his (debatable) despicable conduct in 1814.

Prussian re-done according to Autumn 1813-14 List in ToN, except the corps has 5 divisions.

Note: I've given "superior" status to the lower number Landwehr regiments and "average" to higher number regiments (or where the unit represents a mix of landwehr and reserve infantry).
Last edited by shadowdragon on Tue Dec 18, 2012 11:49 pm, edited 1 time in total.
Top 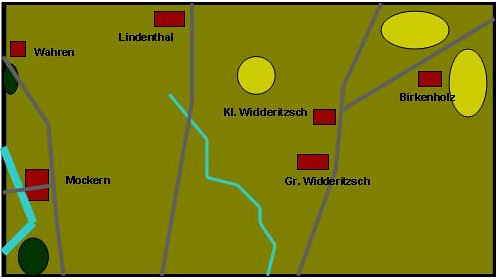 Revised map for a 9' X 5' table is the Mockern map that indicates it's for a larger area.

French VI Corps deployment is from Mockern to the point where the stream exits the bottom of the map; except that Drombrowksi's Polish division is deployed in and around Gr. Widderitzsch. Delmas' division arrives on the road near Birkenholz. Arrighi's cavalry corps is deployed anywhere behind the line of Mockern-Gr. Widderitzsch-Birkenholz.

The Prussians deploy between Wahren and Lindenthal and the Russians to the East of Lindenthal but no closer than 16 MU from the Mockern-Gr.Widderitzsch-Birkenholz line.

P.S. Now you can see just how distorted I made the 6' X 4' table above. Note that I've removed the gentle hill near Mockern. I found it one one wargamer's table version of the battlefield but I'm not sure there was any significant feature there. Hard to tell from Google Earth due to urban development.

I have enough figures to game this but at this time only if I use 1806 Prussians.

I also need to rebase my Russians (the French are done).

Links to reference with maps:

Really like what you have done here and am looking to give it a go at our local club as troop numbers should not be a problem.

I was wondering where you got the troop numbers from, was it the scenario in the Napoleon's Battles scenario supplement?

I am not aware of this, but there is some variation between your ORBAT and Nafziger's book 'Napoleon at Leipzig'.

donm wrote:Really like what you have done here and am looking to give it a go at our local club as troop numbers should not be a problem.

I was wondering where you got the troop numbers from, was it the scenario in the Napoleon's Battles scenario supplement?

I am not aware of this, but there is some variation between your ORBAT and Nafziger's book 'Napoleon at Leipzig'.

I only used Napoleon's Battles for the scenario setting. The troop numbers are "best fit" for FoG troops using Nafziger Leipzig Orbat downloaded from the US Army's Combined Arms Research Library..

...plus info from this site:

Let me / the forum know how the club game works out if you do give it a try. We demand pictures too!

P.S. Any comments, suggestions - including alternatives - with respect to the ORBATS are very welcome.
Top

I and 3 mates will be playing this scenario tomorrow.
I'll post an AAR and let you know it played.
Cheers
"CANNON, n. An instrument employed in the rectification of national boundaries".
- Ambrose Bierce
For more Wargaming goodness, visit my BLOG:
http://trailape.blogspot.com/
Top

Trailape wrote:I and 3 mates will be playing this scenario tomorrow.
I'll post an AAR and let you know it played.
Cheers

Now I have something to forward to....one of your excellent AAR! Let me know if there's a need to modify / tweak the scenario. All suggestions are welcome.
Top

Hi guys
I'll post the full AAR tonight, but meanwhile here are a few of the 43 photos taken of the game.
Cheers

Looks great! Must have been fun. Am envious!
Top

It was a really enjoyable game.
Here is a bit of the AAR WIP:
"While the best part of two Prussian Brigades (Divisions) and their Korps Cavalry pounded away at Mockern itself and the two Brigades from 22 Division defending it, the remainder attacked the line between Mockern and Eutritzsch. These Prussians suffered heavy casualties in the approach, and like the historical battle the French Artillery was responsible the vast majority of pain inflicted.
The fire was so thick that an attached officer in the Advance Guard under Katzeler was killed by roundshot whilst approaching the large battery in direct support of the 22nd Division.
(Much cheering erupted from the French command at this Prussian Officer’s demise)

The Russians IX Corps were divided in their efforts. The 15th Division sent their Brigade of Jagers to occupy ‘Little Widderitzsch’ to the north of the Polish in ‘Greater Widderitzsch’ whilst their Brigade of Musketeers seem to just dither in a threatening stance to the west of the village. Whilst the 15th started upturning tables and ratted through the locals drawers the Russian 9th Division sent their Infantry to attack the French. Apparently in an effort to prove the Russian’s could be all things to all Prussians the Russian Cavalry Corps headed east to confront the French 9th Division.
It was these Russians that attacked between the Polish in ‘Greater Widderitzsch’ and the right flank of the French 21st division that took a pounding".
"CANNON, n. An instrument employed in the rectification of national boundaries".
- Ambrose Bierce
For more Wargaming goodness, visit my BLOG:
http://trailape.blogspot.com/
Top
Post Reply
63 posts