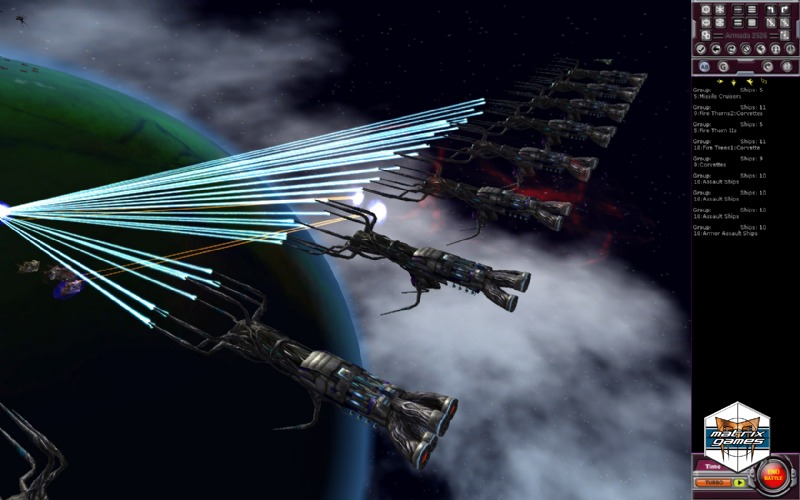 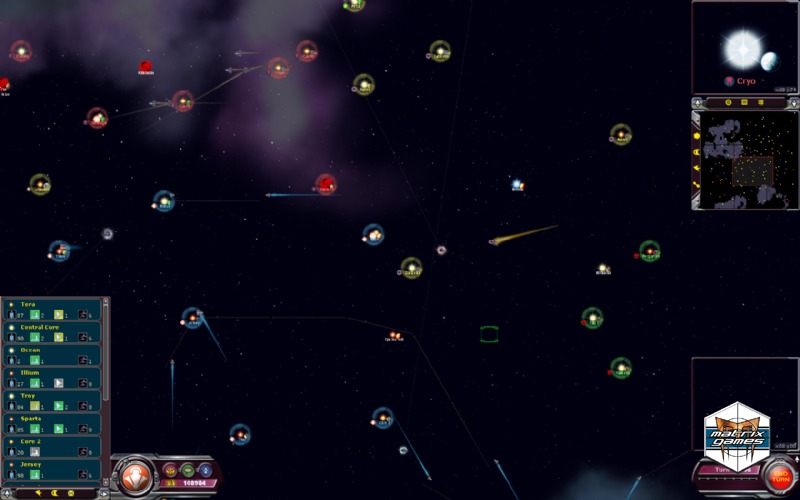 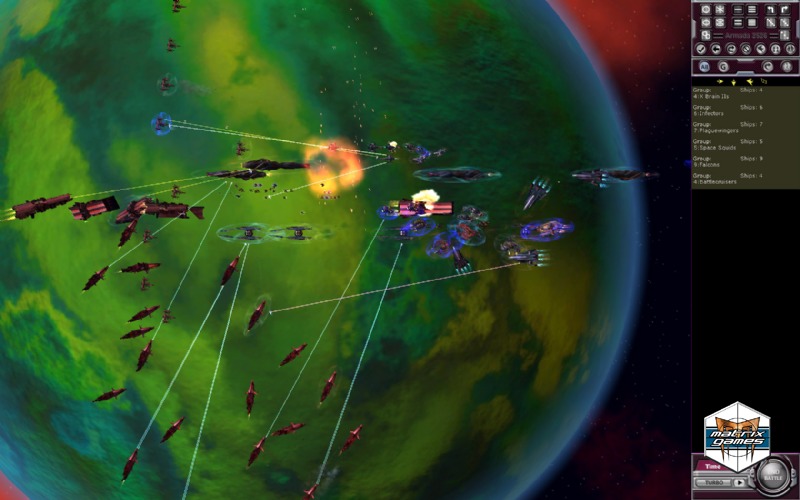 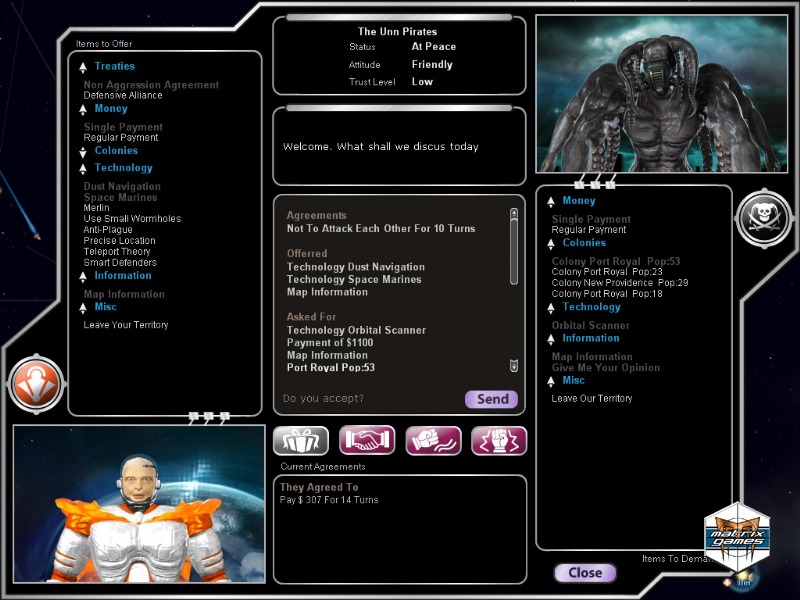 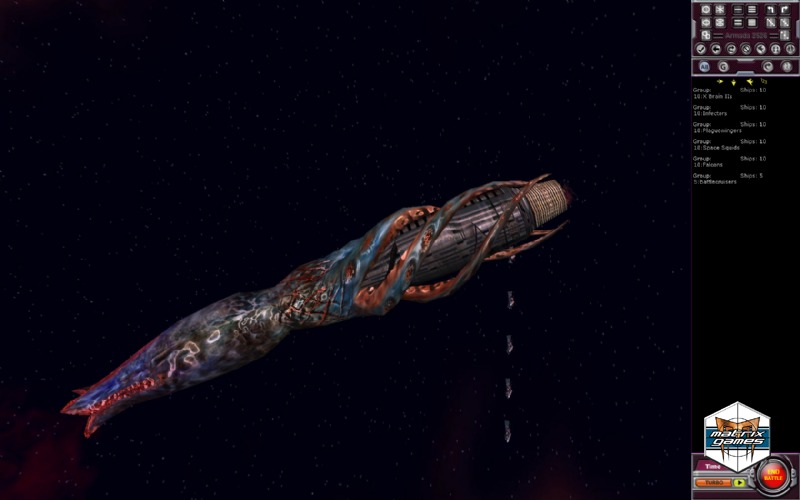 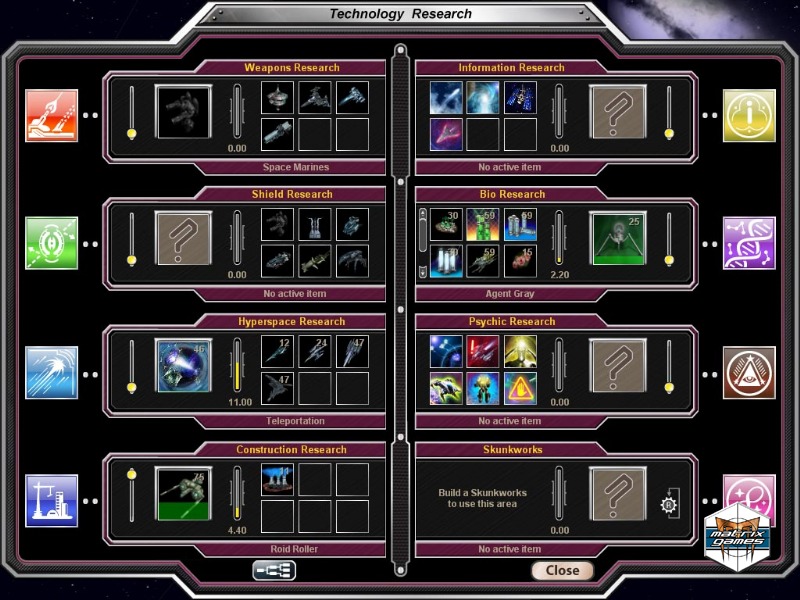 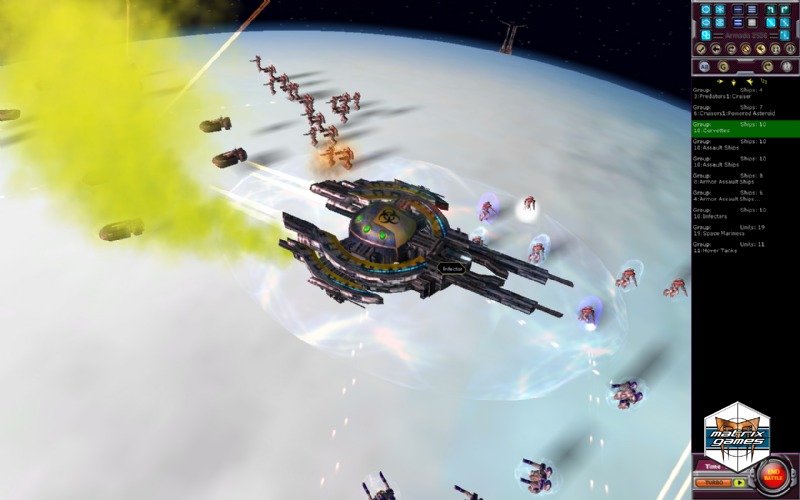 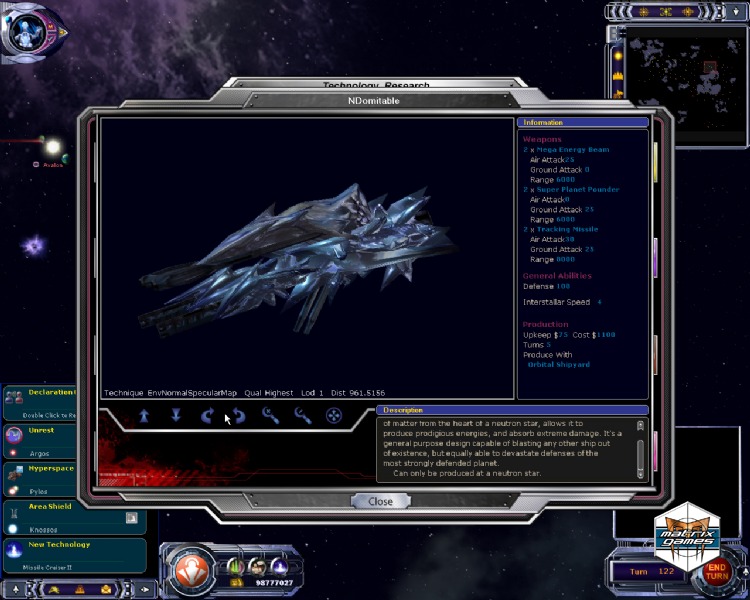 Supernova, the first expansion for Armada 2526 gives you 4X more. More to explore, more to exploit, more to exterminate and expands your gaming…

Armada 2526: Supernova Gets an Update

Apr. 14, 2011 - The hotly awaited expansion to this space strategy hit is now out! Matrix Games and Ntronium…

Feb. 21, 2011 - Multiplayer, more detailed planets, an expanded tech tree and much more coming in this new…

Armada 2526 is the sci-fi stategic product of veteran game designer and developer R.T. Smith, of “Total War” series. It consists in a turn-based strategic game where you can maneuver your fleets, manage your colonies, and grow your space empire. Player will guide its race from its first interstellar journeys, until it becomes a mighty galactic empire. Along the way, you'll explore the galaxy, conduct research, diplomacy and trade, found new colonies, maneuver mighty star fleets, and fight epic battles.

Expand your Empire, Conquer the Galaxy!

Guide one of 12 races on their first interstellar journey from a single planet, until it becomes a mighty pan-galactic empire. From the Star Map you must manage your empire, deploy your fleets and conduct research, diplomacy and trade. Plot your strategy. Explore the universe and found new colonies. Turn your planets into mighty bastions. Make pacts and alliances, make threats or ask for favours - and when the time is right, continue diplomacy by 'other means' and fight it out in a real-time 3D system that brings to life the beauty and visceral carnage of space combat. All with one purpose: to emerge victorious and conquer the galaxy. Although complex and deep, with possibly endless strategies, powerful help and advisor features help you get up to speed quickly.

Unlike many games in this genre, Armada 2526 focuses on providing a game that can be finished in a reasonable time, and emphasizes battle and strategy over economic micromanagement. Create bustling colonies on foreign worlds to build powerful fleets, construct advanced buildings and research facilities that will help you master space and defend your civilization! In a close race for victory, alliances forged through bartering and good will can help tip the balance of power in your favor as alien empires seek power and glory at your expense. Powerful tutorial and advisor features help any would-be galactic commander get up to speed quickly, and with endless possible strategies Armada 2526 offers many different strategies to best your alien foes. Battles can be epic and are presented with glowing energy beams, shimmering shields, and spectacular explosions.

Negotiate alliances and trade agreements or trade money, technology, colonies, ships and information. There are also many different technology items to research. The game system encourages you to specialize in particular areas of tech, so as you expand and meet new players, you will find that they have radically different capabilities. Many of the technologies are disruptive, and force you to radically alter your strategy and tactics to utilize them, or to cope with the lack of.

The artificial intelligence routines have been created by an expert in the field, to provide AI players that are both worthy adversaries, and opponents that are fun to play against. The A.I. has been built into the game from the beginning of development and updated to take advantage of new game features as they are added.

SUPPORTS LARGE UNIVERSES AND MANY PLAYERS

Armada 2526 has been designed to cope with a large number of A.I. players, and to handle a large enough area of space to accommodate them. This means you'll continually be finding new allies or trading partners, and always wondering if there's some powerful unknown enemy lurking just beyond the next star system.

Armada 2526's system is designed to let you make the major decisions about the development of each colony, without having to micro-manage every little detail. This way you can manage a large empire, play the game in a reasonable amount of time, and concentrate on strategy.

Fleets maneuver against each other, seeking to force or avoid a decisive confrontation, or to pick off a weakly defended planet. Technology and infrastructure can give you an edge in the information war, but only a bold and cunning admiral can exploit it.

Although Armada 2526 has glorious sound and graphics that inspire and immerse the player, the main focus is providing a great game play experiences.

Armada 2526 © 2010 Ntronium Games. Developed by Ntronium Games. Licensed exclusively worldwide to and published by Iceberg Interactive B.V. All brands, product names, and logos are trademarks or registered trademarks of their respective owners. All rights reserved. Made in Europe.

Customizable map size and number of players, allowing you to construct tight 2 player confrontations, or huge galaxies with 50 or more players, and thousands of stars. Map designer included

Twelve animated alien races to play and battle against

Ground combat is integrated into the combat system, allowing marines to be landed to battle ground defenses while ship combat rages overhead