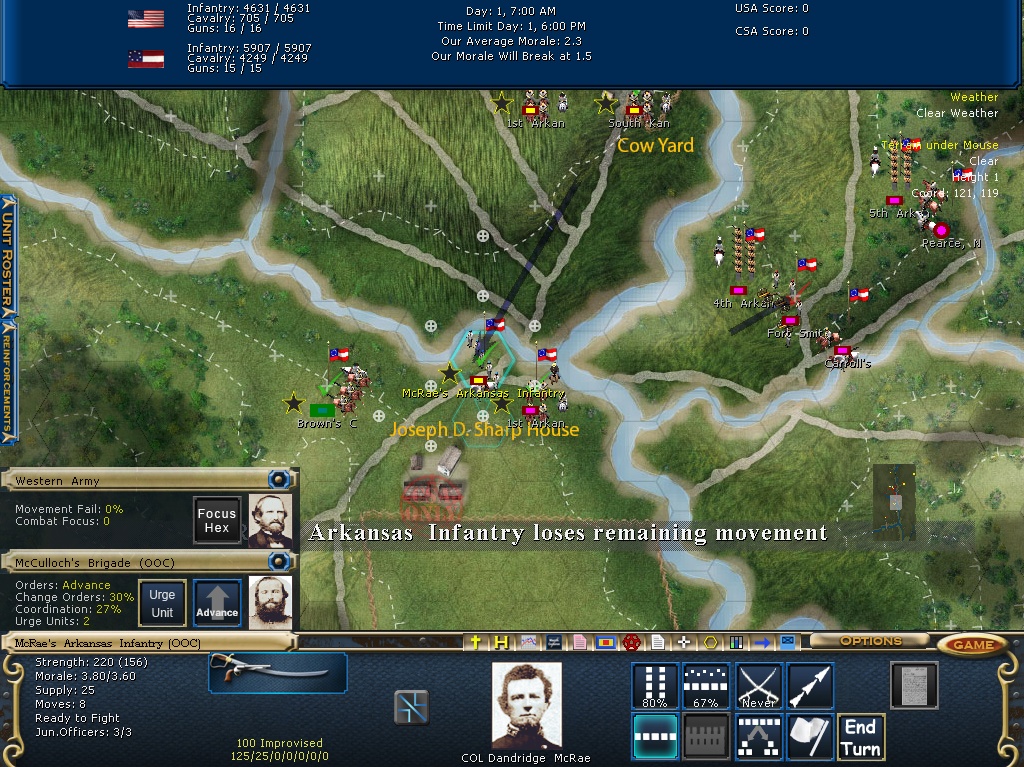 Brother Against Brother is a two-player, IgoUgo series devoted to battles of the American Civil War, with the Union and Confederate armies represented at the regimental level. Each release will feature 3-5 thematically related battles. 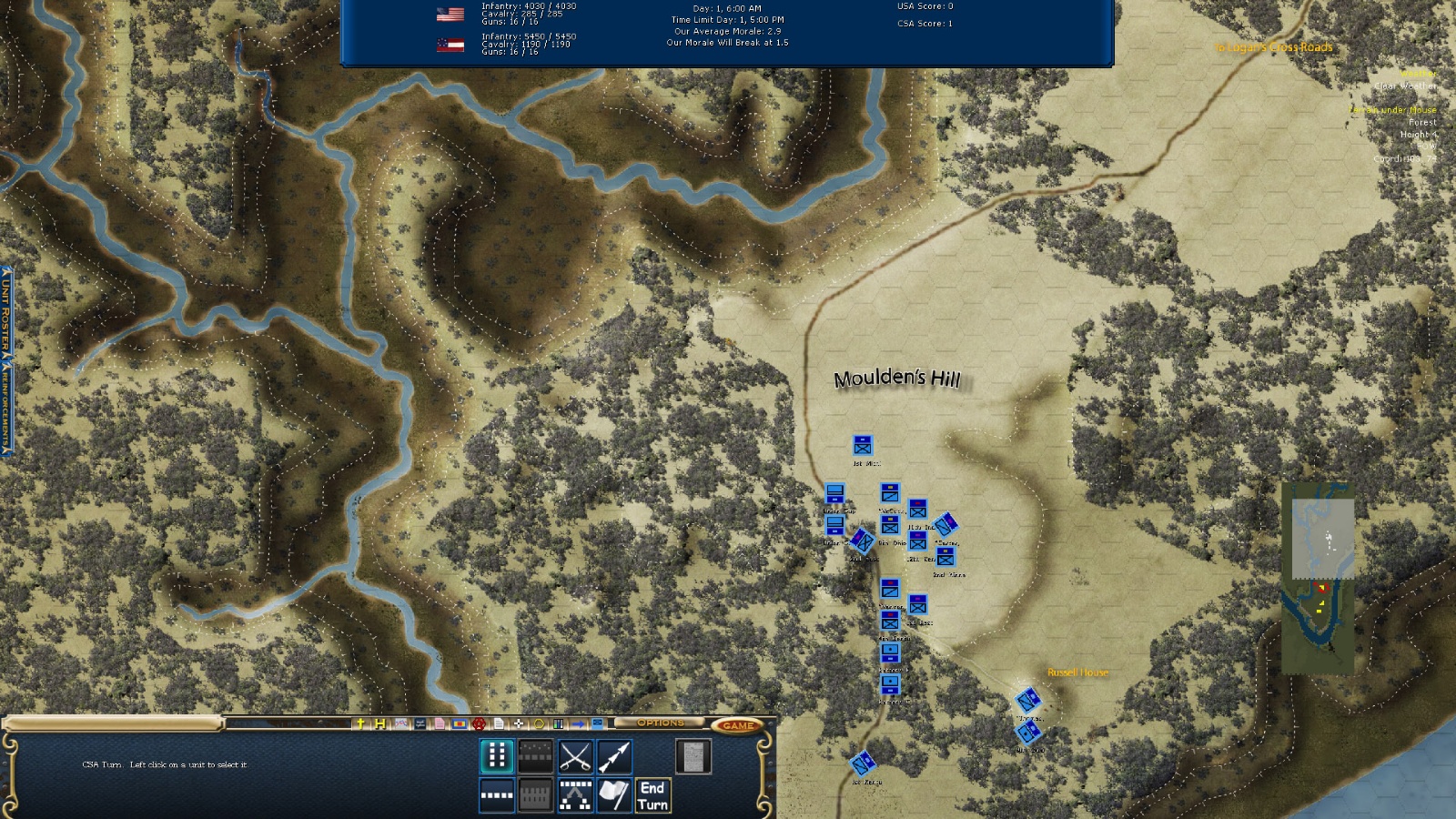 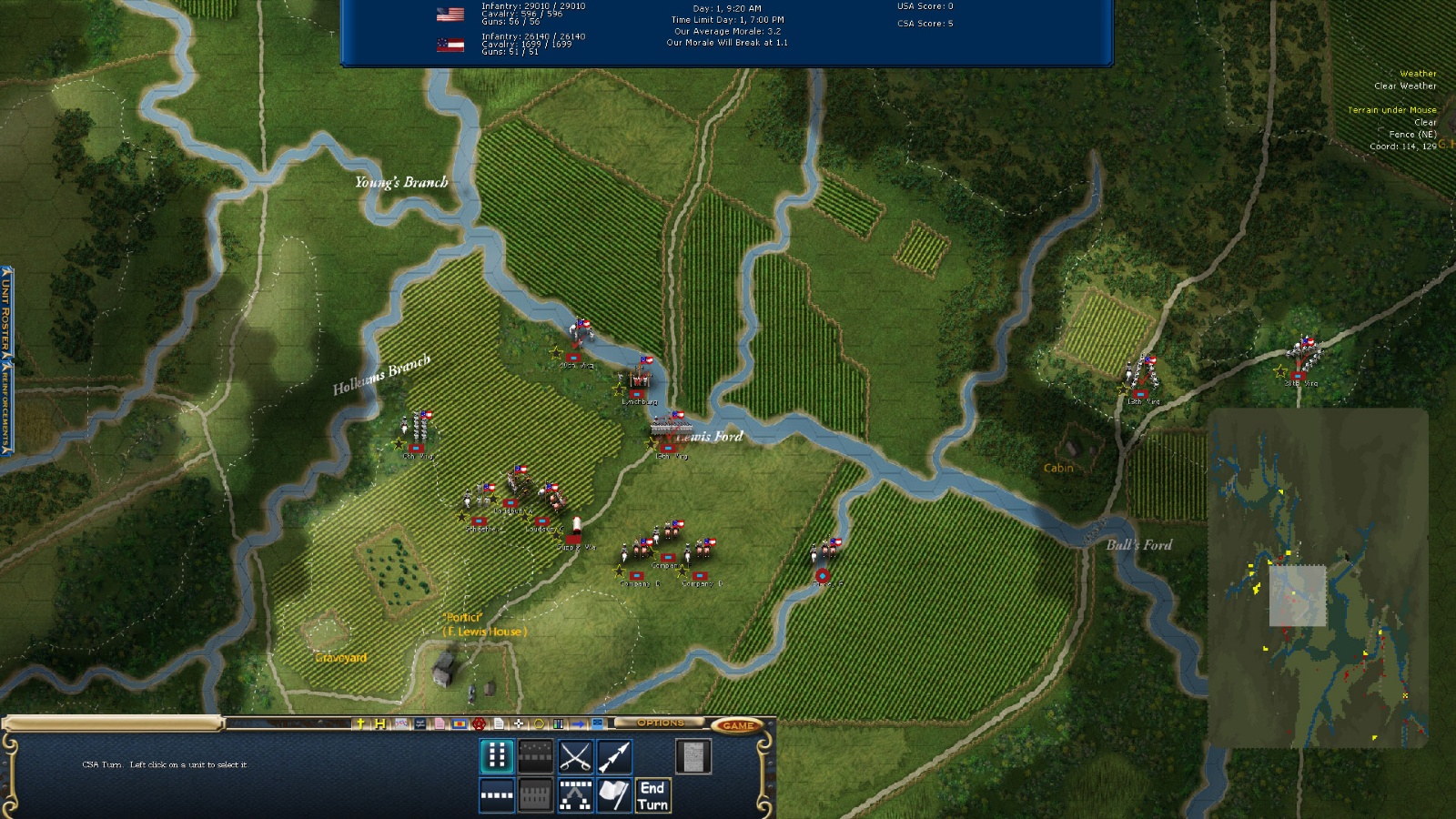 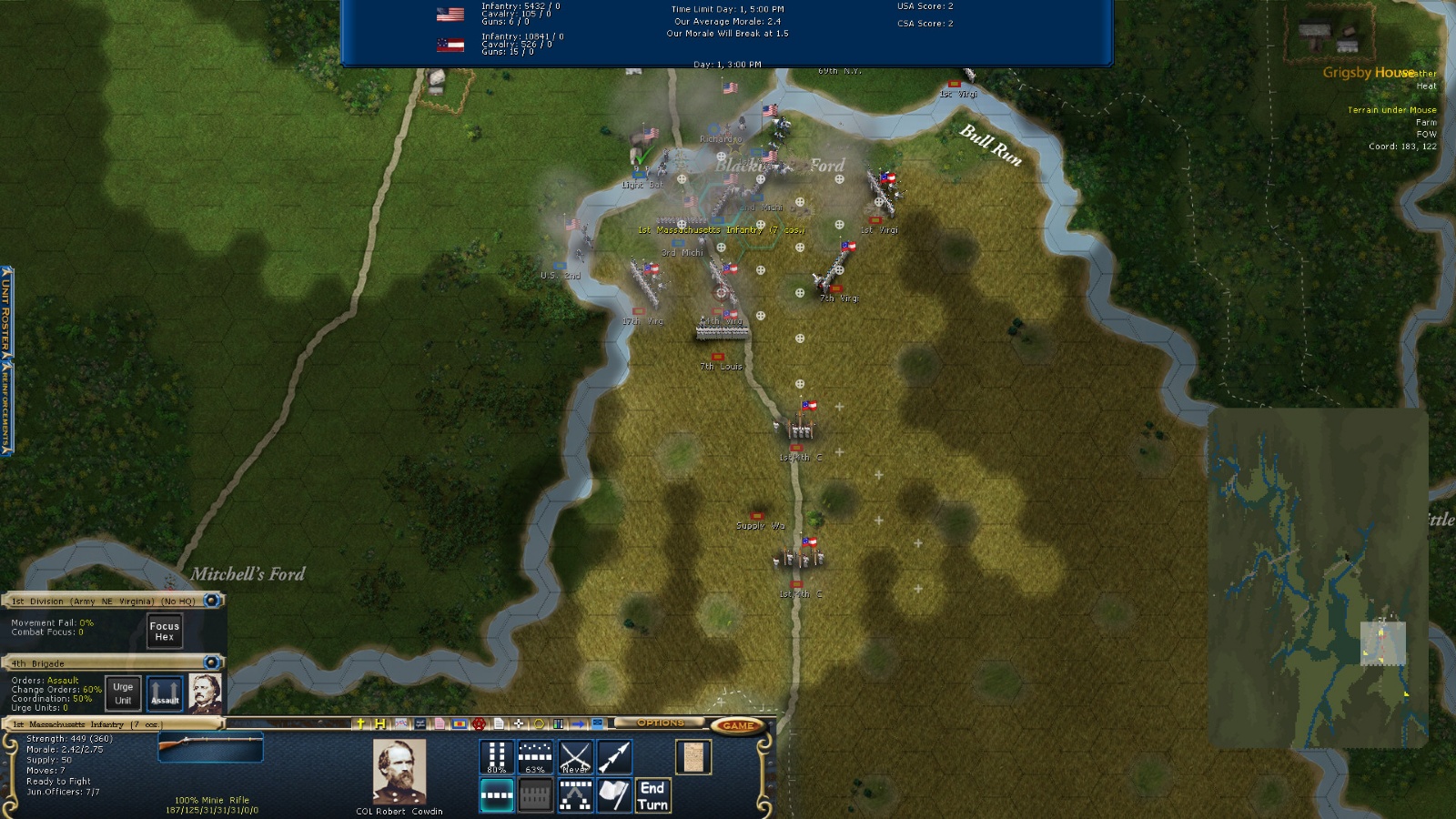 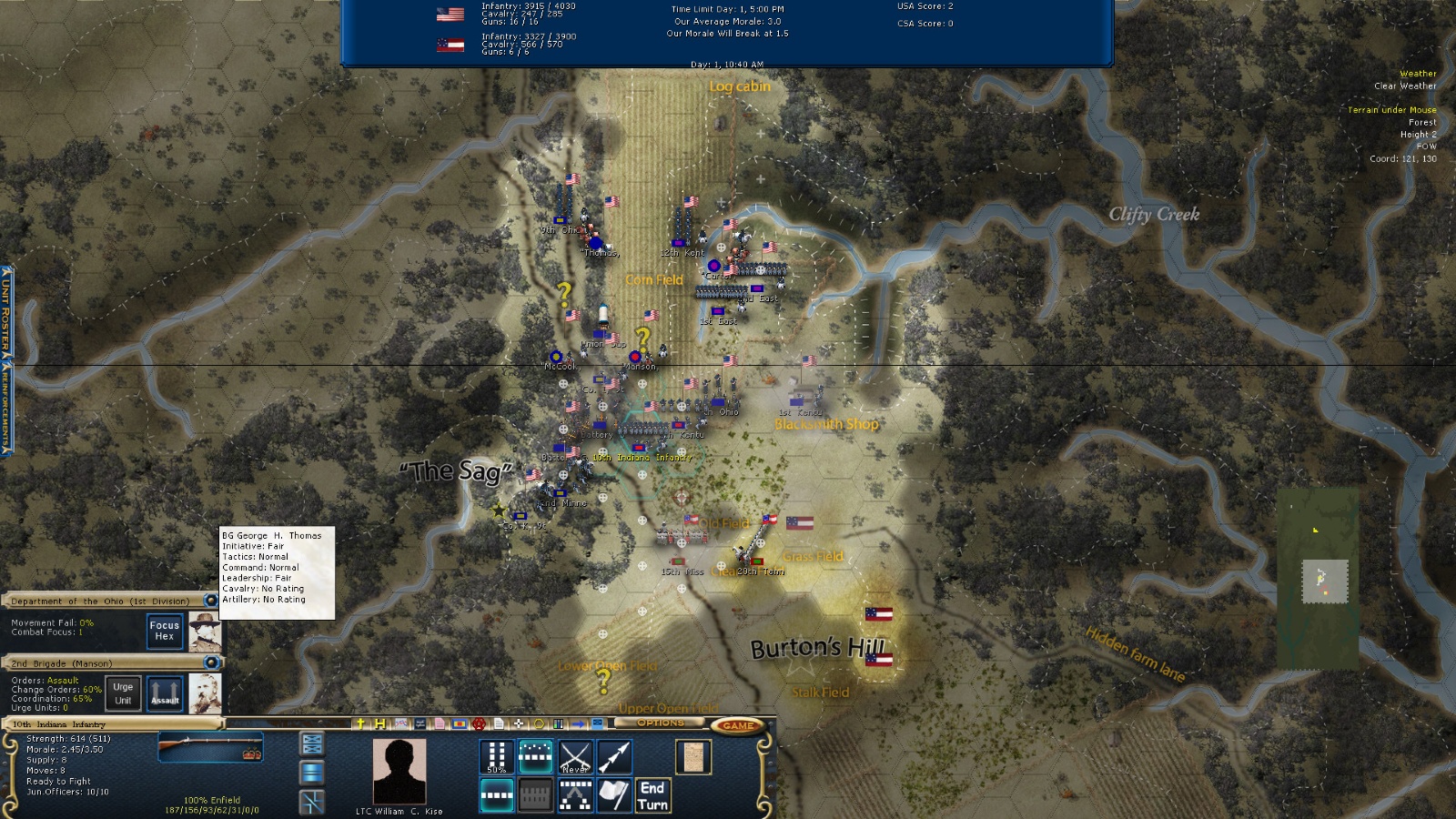 Brother Against Brother Updated to Version 1.02

Brother Against Brother is Out Now!

Apr. 08, 2015 - Today we reveal another super detailed Battle Map for the upcoming Brother against…

Mar. 31, 2015 - We are delighted to reveal another highly detailed map for the upcoming American Civil War…

Western Civilization Software
Apr 16, 2015
English
Tactical
Civil War
America
Intermediate
Turn-Based IGOUGO
1-2
Present
PBEM++
Moddable Data Files
PDF E-Book, Printed - Color
Regiment
1 day
Info Features Requirements
Brother against Brother: The Drawing of the Sword, is a turn-based series of games which simulate the battles of the American Civil War at the regimental level. Providing a wide range of historical and alternative-history scenarios, Brother against Brother lets players refight the major battles of the Civil War at an unprecedented level of depth and detail.
Brother against Brother: The Drawing of the Sword is devoted to the opening battles of the war: the first major battles of 1861 in both the eastern and western theaters, 1st Bull Run and Wilson’s Creek, as well as the first battles of 1862, Mill Springs and Williamsburg.
Brother against Brother: The Drawing of the Sword boasts scrupulous attention to detail in the preparation of maps and orders of battles; Western Civilization Software did years of primary research, pouring over national archives, consulting with a dozen experts, and exploring every inch of the actual battlefields.
The maps themselves are vast, some as large as 50 square miles, and at 75 yards per hex are rendered in intricate detail. The game engine presents the player with a novel system of movement and issuing orders that emphasize the difficulties of wielding command-and-control over Civil War era regiments.
The units themselves are accurately simulated not only in their strength and level of training, but also in such details as their sub-commanders and weapons.  Many units have special qualities in the game that represent the qualities which made them famous during the war, and some units have special attachments like Zouaves or sharpshooters.  The engine models hundreds of details with an easy-to-grasp user-interface: weather, formation, supply, skirmishers, brigade orders, dismounted cavalry, division activation, corps intelligence... even battlefield smoke.
SCENARIOS
1st Battle of Bull Run/Battle of 1st Manassas, July 21, 1861: 1st Manassas (9:20am Start), 1st Manassas (What if #1 - Sudley Springs Ford defended), 1st Manassas (What if #2 - Multi-pronged Union attack), 1st Manassas (Blackburn's Ford (small scenario)), 1st Manassas (What if #3 - Blackburn's Ford (small scenario)), 1st Manassas (2 Player only version), 1st Manassas (Mid-battle (12pm) scenario), 1st Manassas (Standard Scenario).
Battle of Wilson's Creek, August 10, 1861: Wilsons Creek (What if #1 - Single Union attack column), Wilsons Creek (What if #2 - Sigel delayed), Wilsons Creek (Mid-battle (7 am) scenario), Wilsons Creek (Standard Scenario).
Battle of Mill Springs, January 19, 1862: Mill Springs (What if #1 - USA badly picketed), Mill Springs (What if #2 - USA badly picketed (no rain)), Mill Springs (Mid-battle Scenario (Zollicoffer in peril)), Mill Springs (Standard Scenario), Mill Springs (Standard Scenario (no rain)).
Battle of Mill Springs at Beech Grove Encampment: Mill Springs (Beech Grove) (What if #1 - Union attack) (Set on January 20, 1862), Mill Springs (Beech Grove) (What if #2 - CSA attacks first).
Battle of Williamsburg, May 5, 1862: Williamsburg (What if #1 - Faster reinforcements), Williamsburg (What if #2 - Improved defensive line), Williamsburg (Hancock vs Early. (small scenario)), Williamsburg (Hancock vs Early (STARTER SCENARIO)), Williamsburg (Standard Scenario). Williamsburg (Standard Scenario) (no rain).
© 2015 Slitherine Ltd. All Rights Reserved. Carrier Deck, Slitherine Ltd. and their Logos are all trademarks of Slitherine Ltd. All other marks and trademarks are the property of their respective owners. Developed by Every Single Soldier, Retro Epic and Slitherine.
25 Scenarios in total, including full battles, smaller scenarios and plenty of historical “what if” variants to explore what could have happened
Incredible research including primary sources previously unavailable to create the most detailed and accurate maps and orders of battle to date
Regiments (can be split) as the main unit, with brigade and higher command levels fully modeled to reflect historical command and control
75 yards per hex with the largest map up to 50 square miles 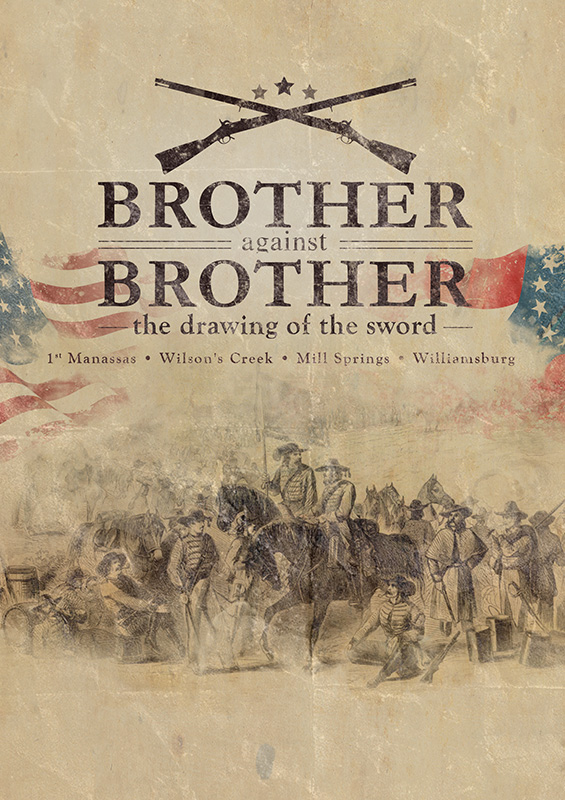