Welcome back to another dev diary of the retro-inspired galactic conquest strategy game, Astra Exodus. This time we'll analyze the research system, including its semi randomization and technology classification.

Also, don’t forget: you can currently sign-up for the Beta. If you’d like to help us with giving your honest feedback on the current version of the game, you can apply here.

The Research Grid can seem quite complex when first encountered, but it is simpler than it looks. You have 9 Research Fields, which are large classifications of technologies with several levels of depth, plus two other categories called Specializations and Special techs.

The 9 basic Research Fields on the game are called:

Without going into specifics: the Construction, Production and Resources fields focus on improving Colonies, while Defenses, Weapons, Engineering and Power allow for the research of new corresponding modules for your starships. Finally, the Troops field, as the name indicates, serves to unlock new troop types and improve the existing ones.

In turn, each Research Field has 7 different progressive levels in which you must research at least one tech from each level before progressing to the next one. Through traditional research, you will only be able to discover one tech per level. However, you can trade for other techs of the same level if the AI is willing and actually researched a different one from that level.

All the levels are randomized, with the exception of the first and last levels, meaning that in a regular game, out of a possible set of five different techs, you will only get three at random to pick only one from. There are faction traits, however, that either increase or decrease this number of available techs. This system is designed to make player choices more meaningful, while also enhancing the game’s replayability.

Finally, almost all of the late-game techs, which belong to level seven of each Research Field, are repeatable, giving an increased, cumulative effect each time they are researched. This guarantees that you will never run out of techs to research. 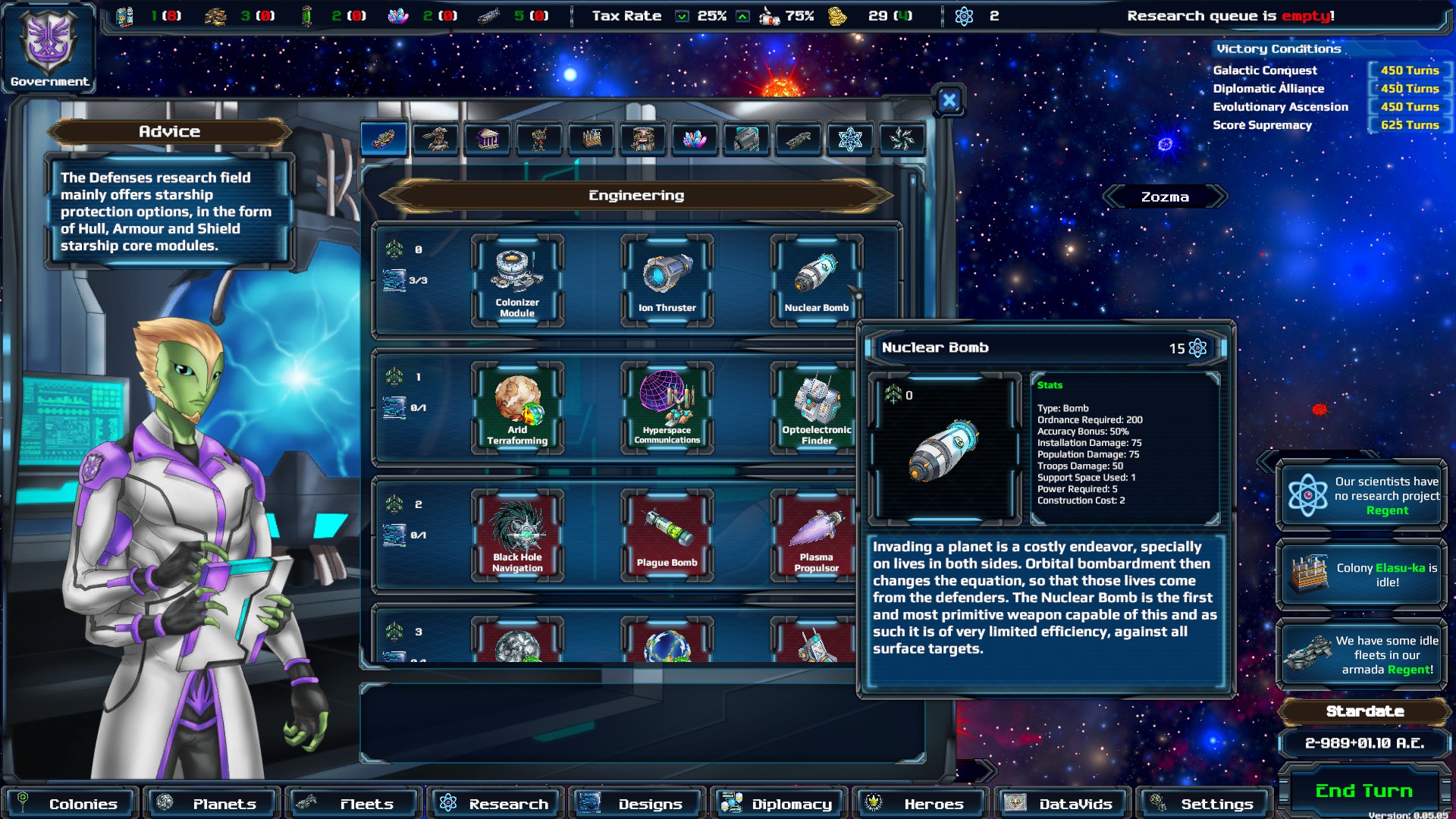 As previously mentioned, one category of techs is called Specializations. This one is focused on improving starship modules by enabling Modifiers for them. These modifiers can greatly enhance the effects of a module, while also increasing its cost and power requirements. For example, in a weapon module, a modifier might increase its fire rate or in the case of an armor core system, another can even reduce its tactical speed penalty.

Specialization techs are not distributed in levels but in groups, these groups correspond to the major module types. They are then:

Each of these groups has 4 techs available to research in a specific progressive order.

The number of specialization techs that can be researched at any time is determined by the Specialization Picks value, which increases by 2 each time you complete a level in the 9 research fields by researching at least one tech of said level. As the name indicates, this system is designed for the specialization of starships and thus completing a group to enable all modifiers of a said module category, is generally the best strategy. 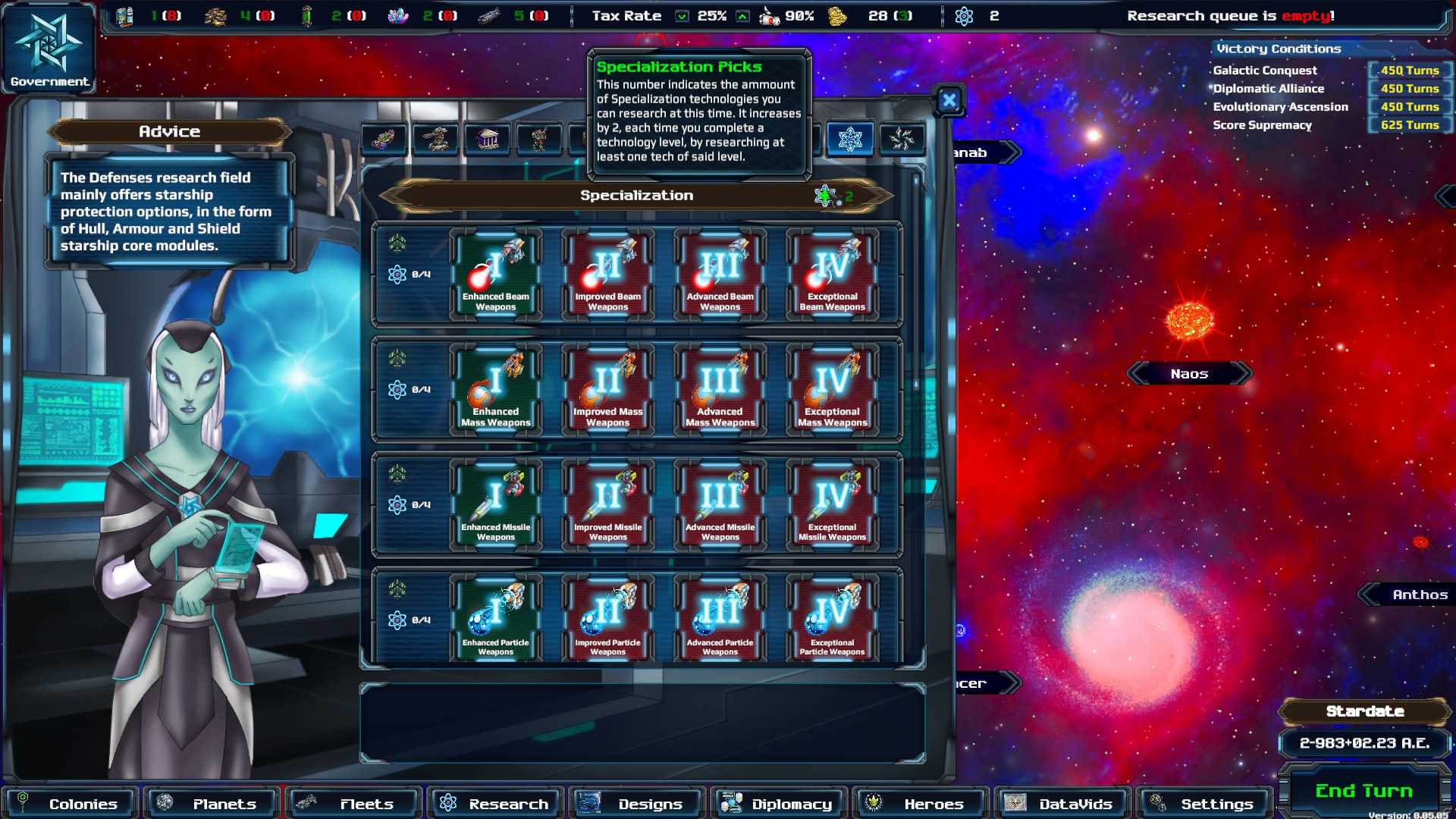 Last but not least, the game has a category called Special Techs. This system works differently depending on whether or not you are playing the Campaign or in Skirmish mode. In the Campaign, it is here where you will find the techs unlocked as rewards for completing Optional and Secondary mission objectives at certain difficulties. 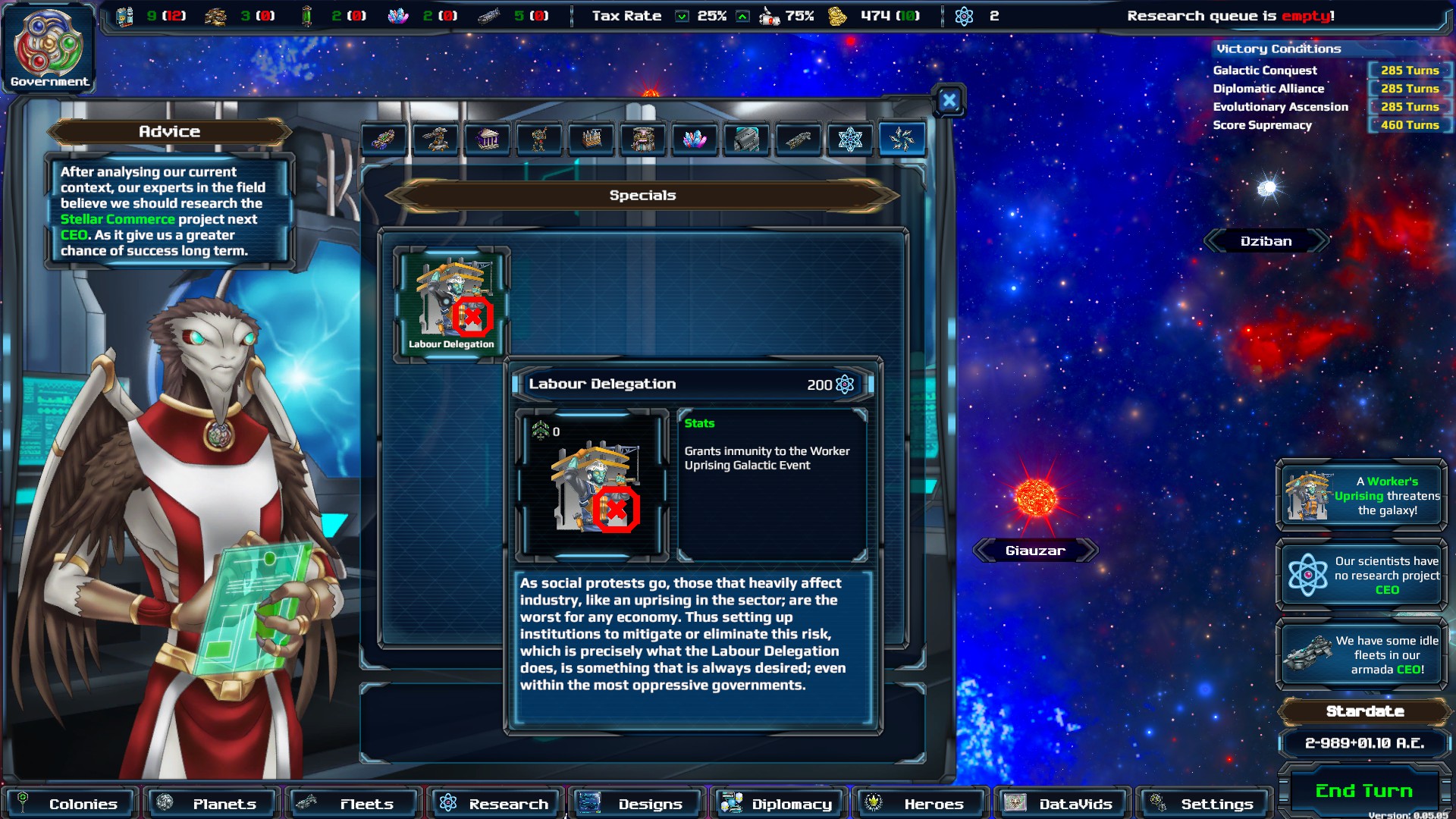 In Skirmish mode, you will find the techs that serve to negate the adverse effects of Galactic Events in the Special Techs category. These events are in general pretty bad for all players, for example, Lithovore Microbes can attack the galaxy and greatly reduce the materials production galaxy-wide. Thus by researching the counter technology available in the Special Techs category you can avoid the effects of this galactic event whenever it happens. Special Techs are enabled only when you first encounter the event they are designed to prevent.

We’ll talk more about Events in general, including Galactic level ones, in a future dev diary.