We are back for another dev diary, this time regarding Starship Design.

Before we get to the subject at hand, don’t forget to join the Discord channel and follow our official Astra Exodus Facebook page, so you can be notified of all the latest news as well as talk with other fellow fans.

In Astra Exodus all factions have their own classes of Starships. A Class is merely the name for a role and the specific graphics a faction has for it. More specifically, there are 5 military starships, 2 civilian starships and 2 strike-craft roles in Astra Exodus. 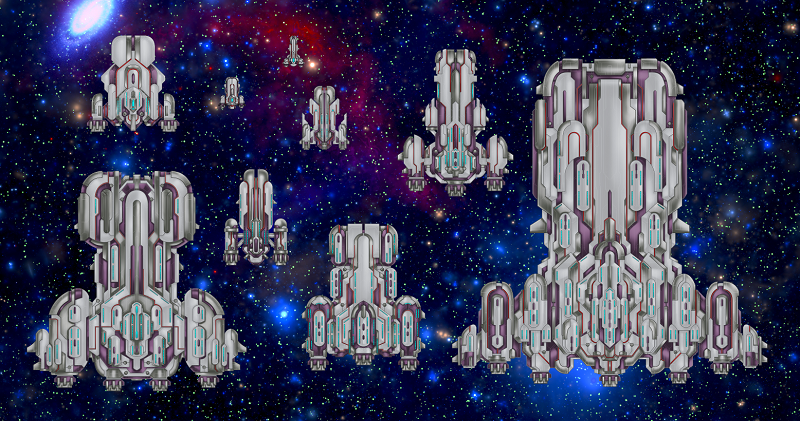 After picking a Class, in order to create a Starship Design you need to fill it with modules (like weapons, armours, engines, generators, and much more). In Astra Exodus you have 3 types of modules: Weapons, Core and Support.

Weapons are quite self-explanatory: they serve to pummel the enemy, but they can also be further categorized in Beam, Particle, Missile and Mass weapons. Each Weapon has its own characteristics, but certain types tend to excel in certain areas. For example, Beam weapons tend to do extra damage against armour and have average range, while Mass weapons have a high rate of fire but poor accuracy. All the weapons are always placed on a mount point within a starship. This is a logical and visual representation of where the weapon is located on the ship’s structure or hull. 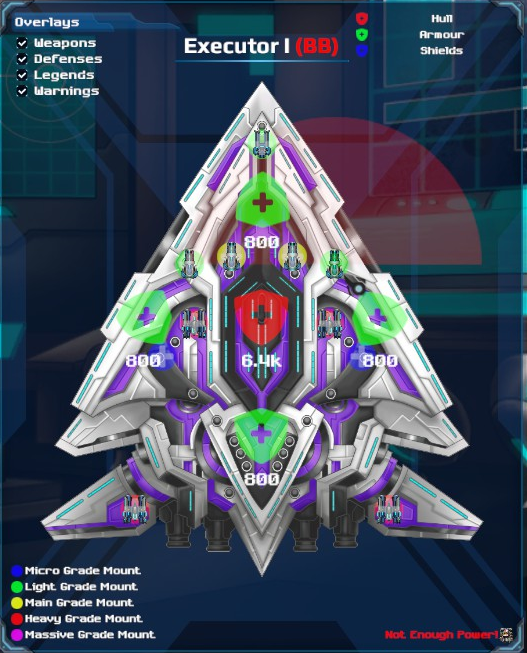 Mount points have 5 grades: Micro, Light, Main, Heavy and Massive. The larger the mount point, the more powerful the weapon mounted in that spot will be. However, it will also be less accurate and have a smaller field of fire. Also, Micro mounted weapons are the only ones that can target strike-craft. Not all weapons can fit all mounts, so you’ll have to pick wisely if you want to fit all the mount points on an optimal design. 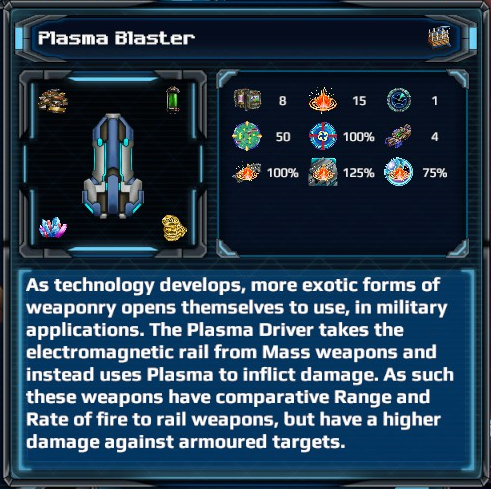 Core Modules or Systems are essential to any starship. They can be categorized in: Engines, Hull, Armour and Shields. The most critical are the Engines, without one of these modules a Starship Design will never be valid. Hull modules serve to reinforce the structure, adding additional hit points to the ship. Armour instead provide directional defense, meaning it defends the starship from a certain facing (port, starboard, etc), at the expense of additional weight and thus a slower tactical speed. Shields also provide directional defense, but in this case at the expense of power consumption. They also collapse with each section (one per facing) destroyed, requiring a small time window to reset, during which the ship is vulnerable. 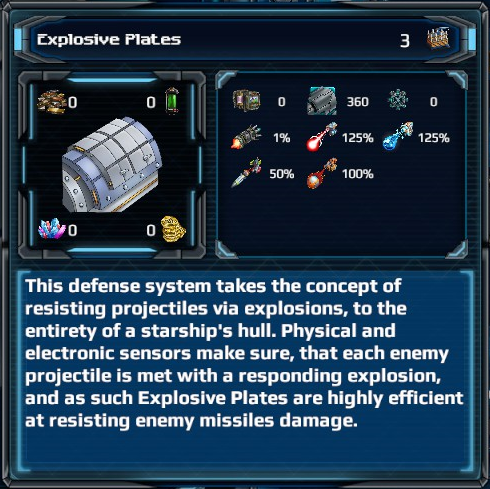 Finally we have many types of support modules. Things like Generators, Capacitors, ECM Suites and Bombs fall into this category. Generators are used to power the ship, while Capacitors are required for Beam and Particle weapons to function. This is in contrast with Missile and Mass weapons, which require ordnance storage holds to be installed. ECM Suites enable the starship to avoid enemy fire by reducing the accuracy of their weapons. Bombs serve to bomb planets, although one must be careful with their use, as that can carry a significant diplomatic cost.

There are many other Support module types, but the most important are the ones classified as Special. These alter the game rules in some way, not necessarily combat related. For example, the Trading Holds special module allows your ships to generate income while being idle. Then there is the Subspace Web, which grants the ship the ability to temporarily immobilize a target. All the Support Modules have a value indicating how much space they occupy aboard a ship: the bigger this ship is the more space it will have and thus the more modules it will be able to fit. This is balanced by the fact that the more weapons/shields/engines/etc a ship has, the more support modules will require, so bigger ships will not always benefit the most out of this. 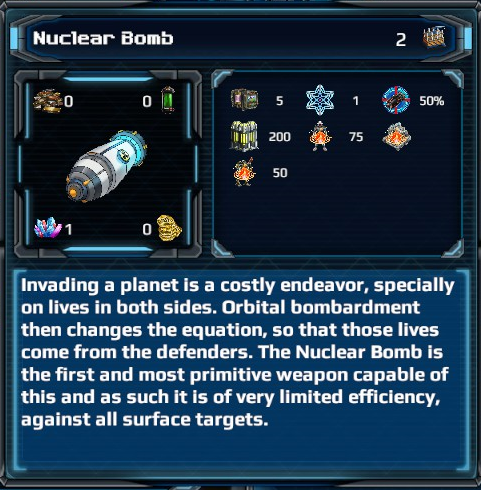 Once you have selected a Class and installed all the required modules you will still need to select a name and most importantly a battle tactic. This setting defines the behaviour a ship will have when given an attack order against any target. There are 4 different battle tactics in the game: Engage, Assault, Harass and Disengage.

The default tactic is Engage, in which the starship will automatically maintain optimum firing distance, with a frontal facing to the enemy. This is better served for slow-moving Battleships and Titans. In contrast, with the Assault tactic a starship will maintain movement at all times, going towards and past the target; in strike-craft like runs. This tactic works best for small starships, like Frigates and Destroyers. The Harass tactic has the ship orbiting the target at maximum range, trying to maintain the most distance with it, while nibbling at it with long range weaponry. This long-range tactic is better suited for carriers or missile cruisers. Finally there is the Disengage tactic, which is used mainly for civilian ships. This will trigger an automatic hyperspace retreat, the moment the ship comes into sensor range with the enemy. 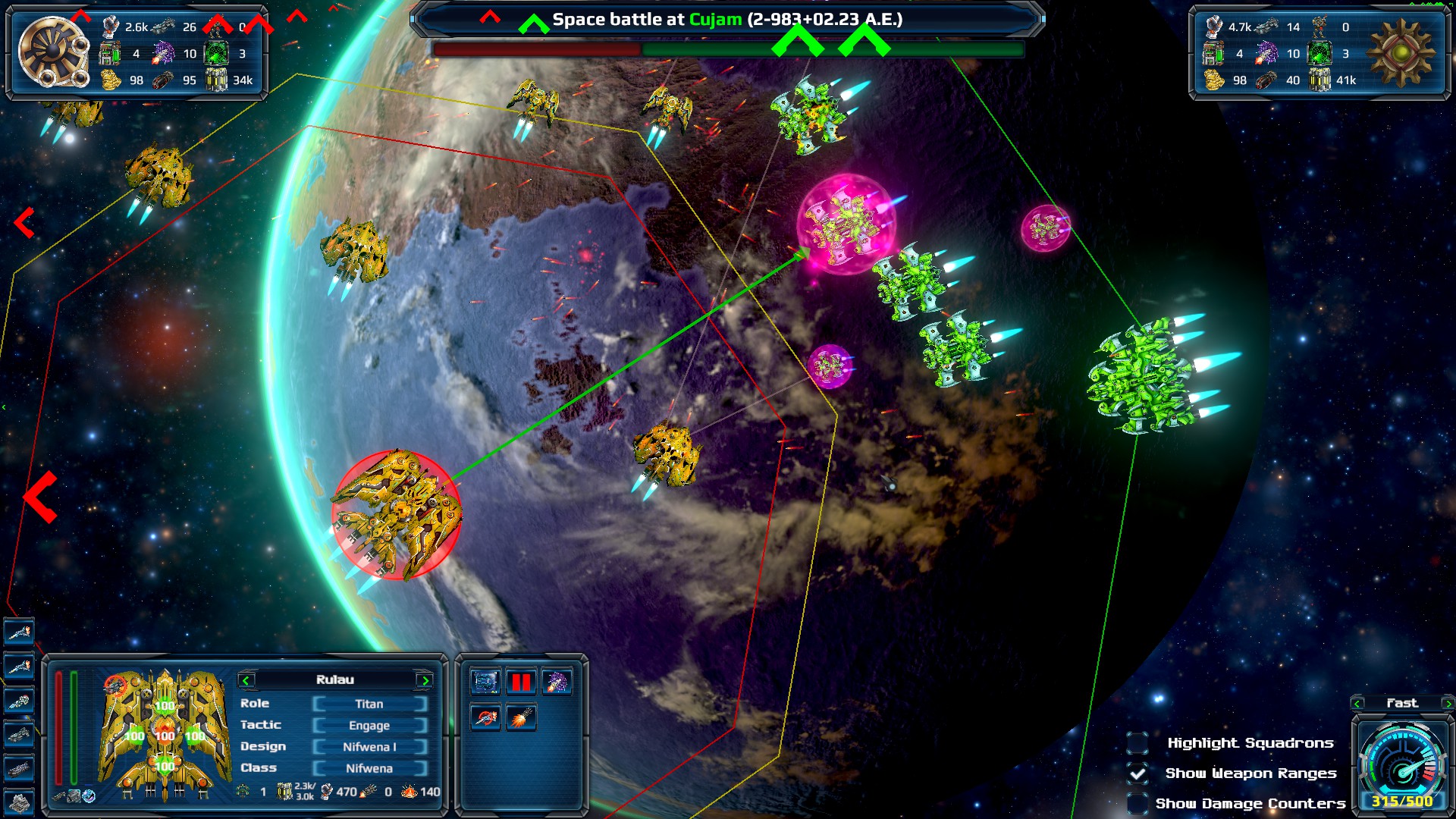 Let us know what you think of this dev diary and on Astra Exodus’ starship design system! We will be back next week with a new dev diary.