Once again it is time for another Astra Exodus dev diary!

This time we will focus on the many types of events you can encounter while playing as well as the DataNet, which serves as the game’s notification system. All of this is designed to breathe life into the galaxy, the lore behind it and increase replayability.

Practically speaking, the DataNet holds the notifications the player receives about the issues, aspects and decisions that require his or her attention. These can be as mundane as a colony’s empty build queue or a warning that you’re not researching any technology. They can also be quite complex and engaging, like an incoming diplomatic message from another faction, which requires a response in order to progress with the game. More importantly, it’s mainly through the DataNet that you will find out about the many galactic events that can be triggered while playing the game.

While exploring the galaxy, your scouts will encounter all manner of strange phenomena. We already talked about things like Supernovas and Wormholes in the void, but Exploration Events represent the discovery of even stranger things on the surface of alien planets or orbiting strange stars.

For example, any of your wandering fleets might encounter a band of friendly smugglers who will decide to join your faction, adding their freighters to your cause. Or possibly they could run into an incredible substance called Xenobiomass, which can greatly increase the materials production in one of your planets. Other more mundane exploration events can also be found, such as Hibernations Pods, that provide extra population to one of your colonies, or the discovery of a Splinter Outpost that will immediately rejoin your empire.

There are many of these events available for you to find, however the AI can also scout these out and if you fall behind in the exploration game you might miss out on many of them. 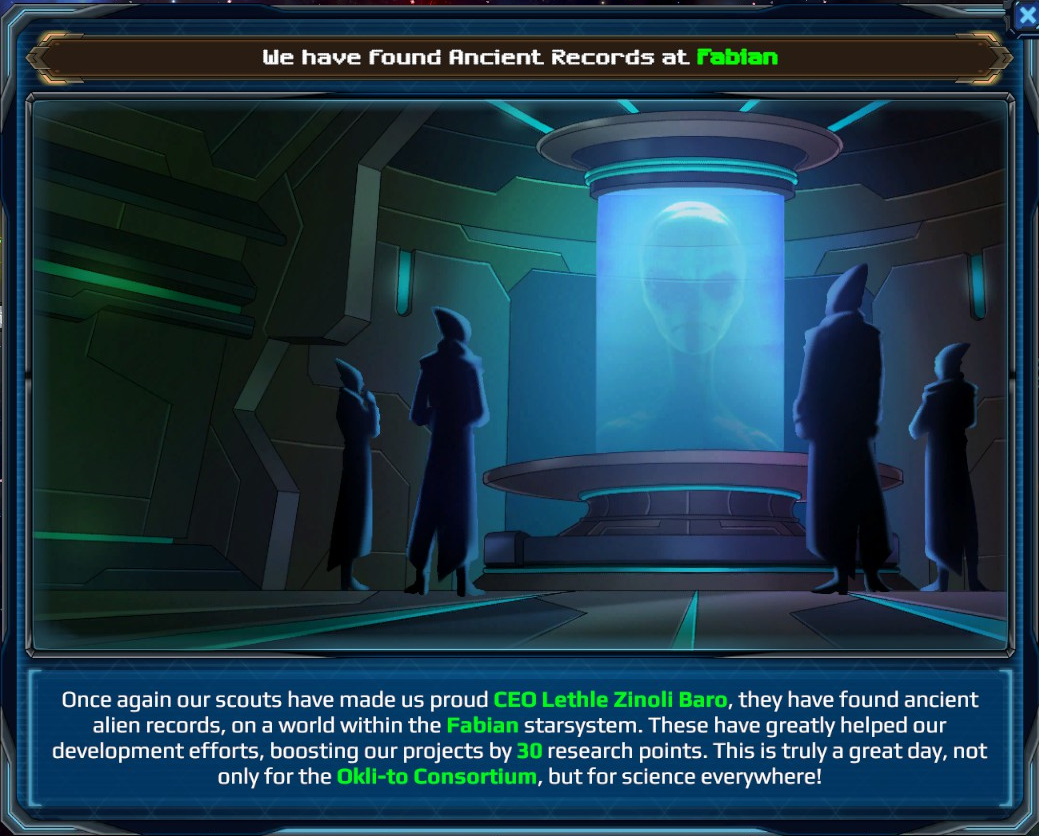 With an even greater impact than Exploration Events, galactic-wide Random Events (also called Galactic Crises), can also happen occasionally. These are so massive that affect all the factions in the galaxy, regardless of where they start.

These often offer some insight on the work of the enigmatic progenitors and include some truly gameplay altering effects, such as the Progenitor Mindprobe. A psychic pulse from an unknown source that sweeps the galaxy, putting all heroes out of commission for a while, regardless if they are active or not. Another dangerous example is the Subspace Anomaly. This event effectually reduces the Hyperspace range of all starships by half, thus possibly cutting off entire regions from the rest of the galaxy.

Regardless of the random event however, the player always has the option to research a corresponding special tech. Once researched, it serves to nullify the event’s effects to the player’s faction, effectively granting an advantage over all others. Finally, it is worth it to mention that you can adjust the frequency of these events on the game rules panel when starting a Skirmish game. 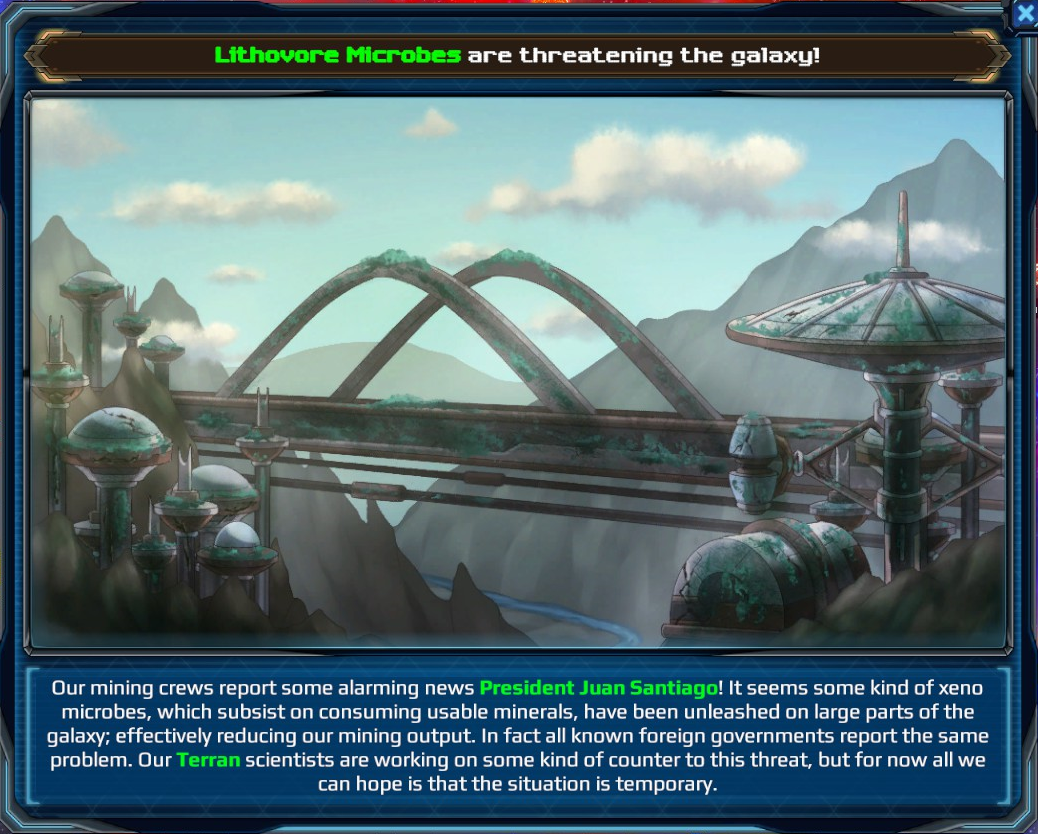 Narrative Events are only available in Skirmish Mode, since the Campaign already has its own narrative systems. They serve to highlight the many milestones the player goes through in any regular game. From colonizing the first world to a first contact (and interstellar war maybe), to discovering the whole galaxy. Each one of these events has a plaque (pretty image), with a text incorporating the details of the current context of the faction. 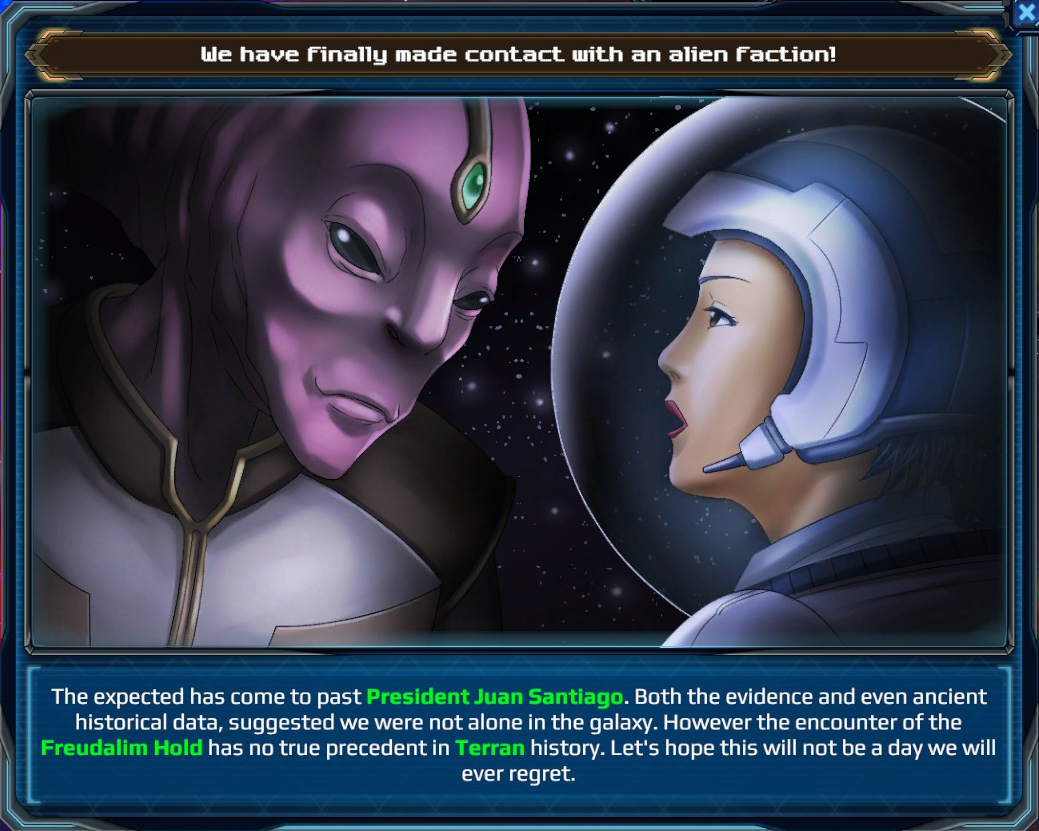 We will be back next Tuesday with a new Dev Diary, this time on Ground combat! Don’t miss it.