This diary will discuss exploration in more detail, including how it has changed since Distant Worlds: Universe. 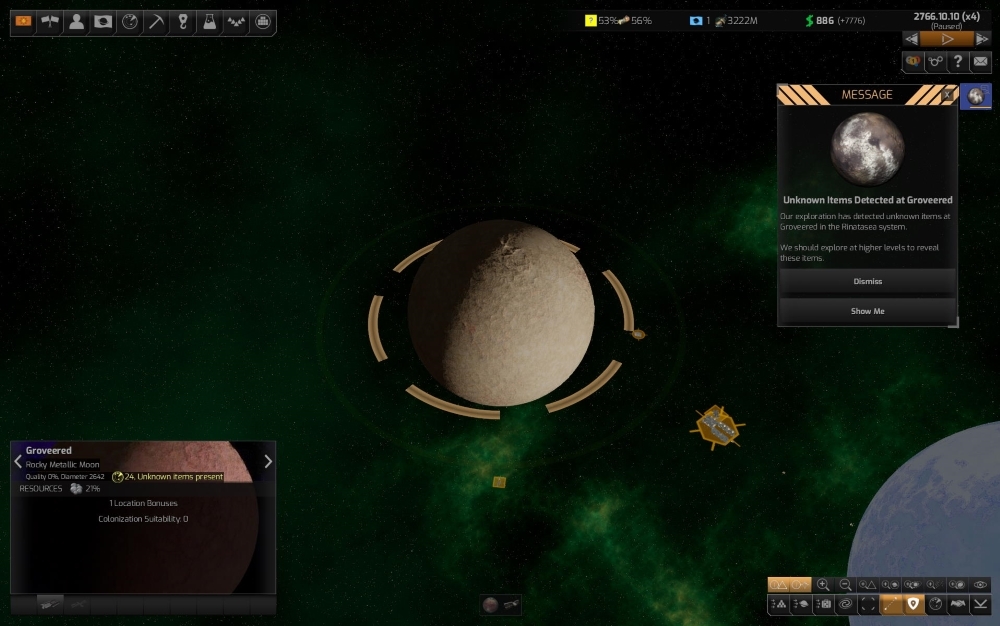 Exploration and discovery have always been something Distant Worlds does well.  The procedurally generated “living galaxy” means that no two galaxies are the same and outside of any story events, there are plenty of unique locations and surprises awaiting you, which can make each game feel different from the last.  Some discoveries are relatively mundane, others are quite exciting while still others can be downright galaxy-changing and the same holds true in Distant Worlds 2. 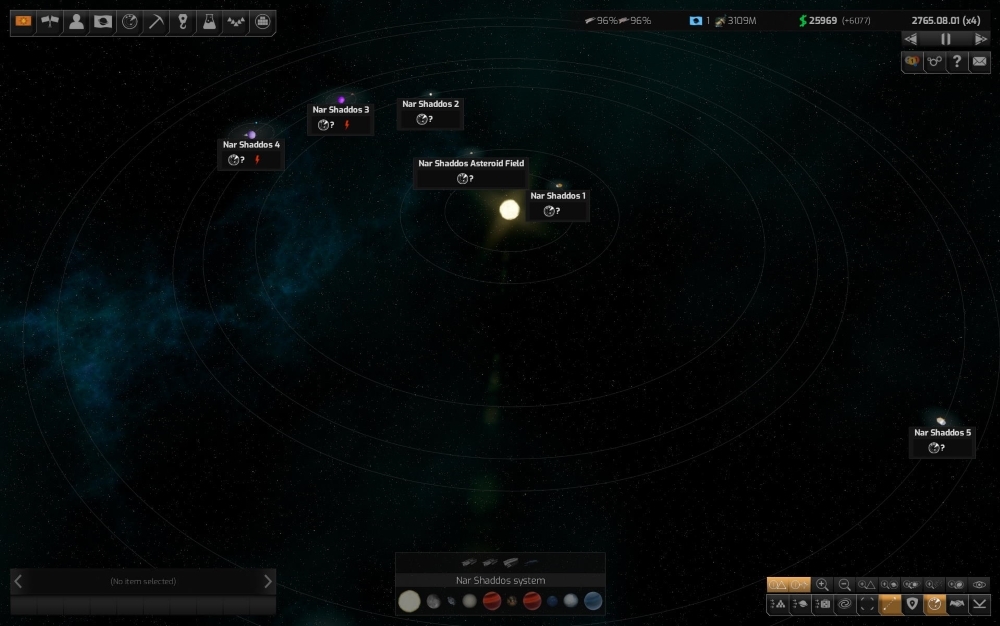 In Distant Worlds: Universe, we had a wide variety of different ruins and ancient ships, ancient battlefields and such scattered around the galaxy from ages past.  That’s all still there in Distant Worlds 2, but we’ve added more and made finding everything a bit more interesting.  First, just because you’re in a system doesn’t mean you automatically see everything.  What you see, even within a system, now depends on the sensors on the ships and stations you have in that system, so even within the same system you won’t know everything just by jumping in and taking a quick look.  In addition, everything now has more layers of information than the binary system we had in Distant Worlds: Universe, where you either knew it was there or you didn’t.

We now provide the player with exploration cues on both the system badges and a separate exploration map overlay to let you easily see which systems have been fully explored and which still require further exploration. 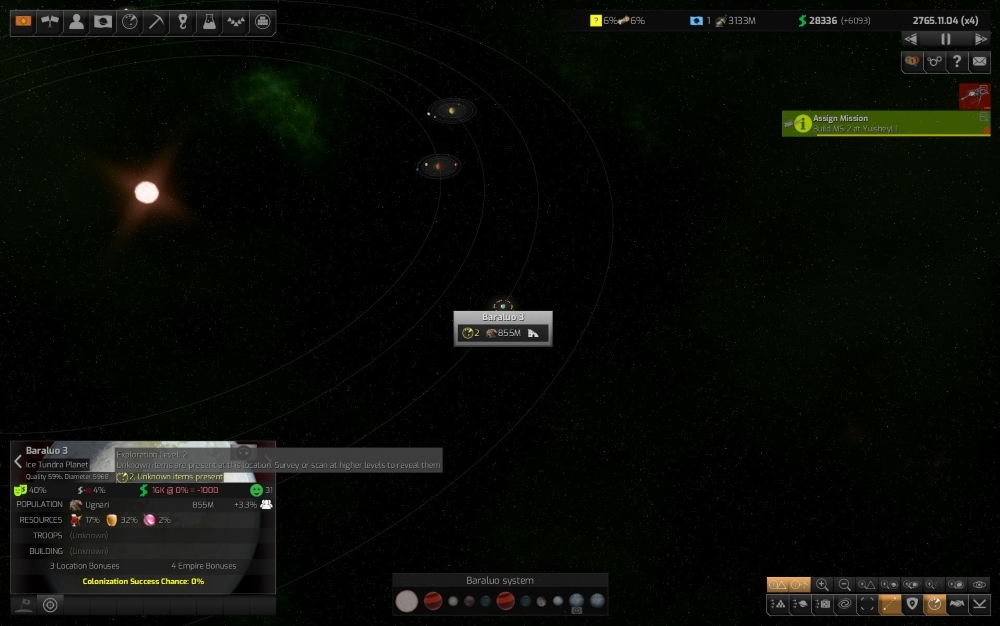 Wiith regards to planets, asteroids and such, which are what you are mostly exploring, they now come with a range of exploration levels which look like this: 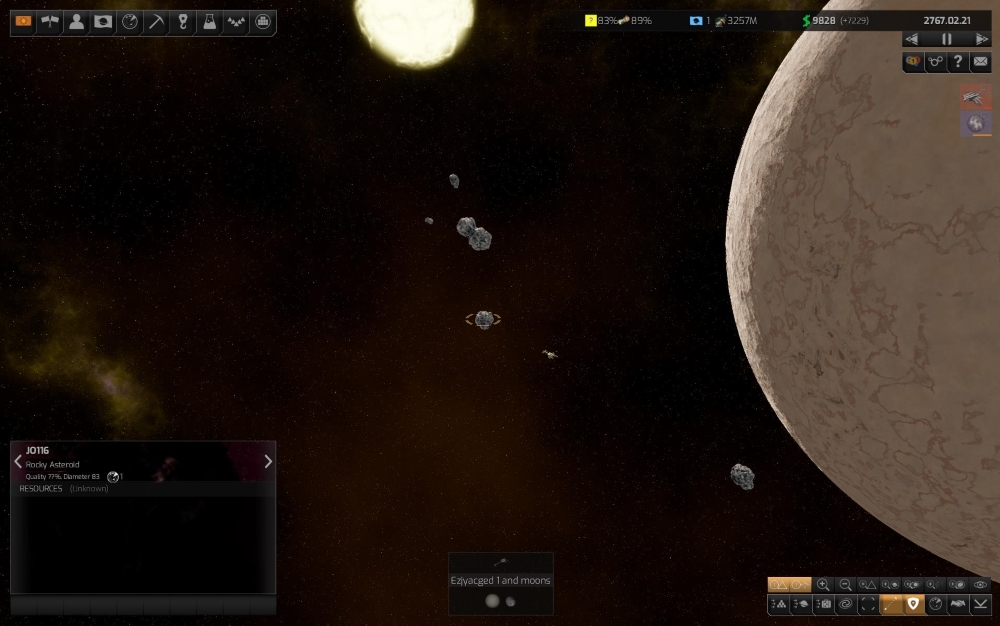 Exploration levels in the initial release go up to about 100.  There’s clearly a lot of room for things to hide between 20 and 100 and as a result, some exploration will continue, even in already known areas, well into the game.

How do you raise the exploration level?  Well, in Distant Worlds 2 there are a few ways to do this: 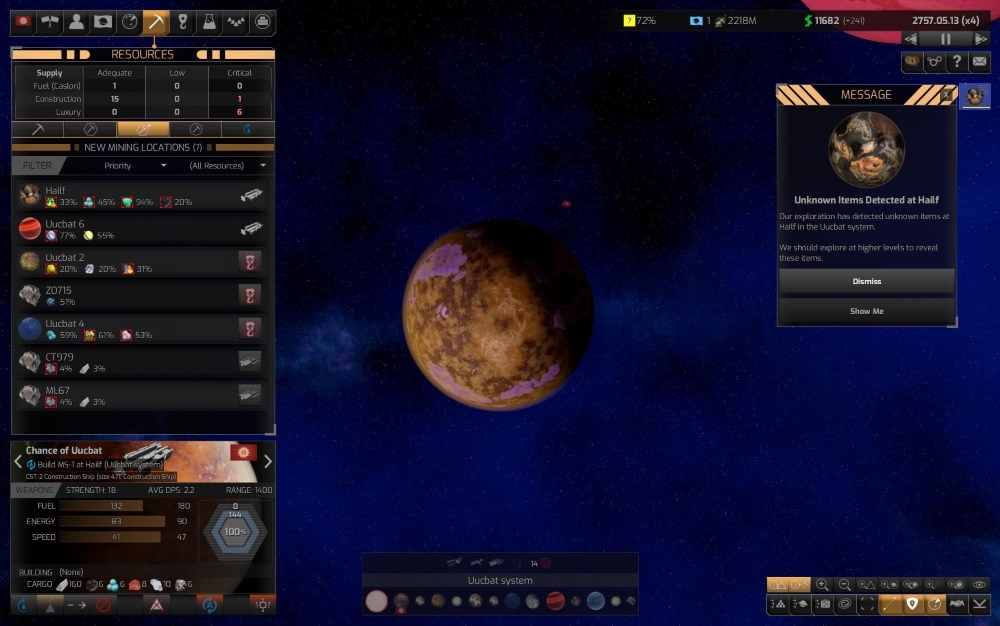 In terms of exploration, not including special story locations and events, what else can you discover?  Everything that you could in Distant Worlds: Universe, and more.

First, we’ve added new descriptive planetary bonuses which distinguish even planets of the same type from each other and can make a given location unique.   Some planets are independent worlds, which even have their own populations and can engage in trade and diplomacy. 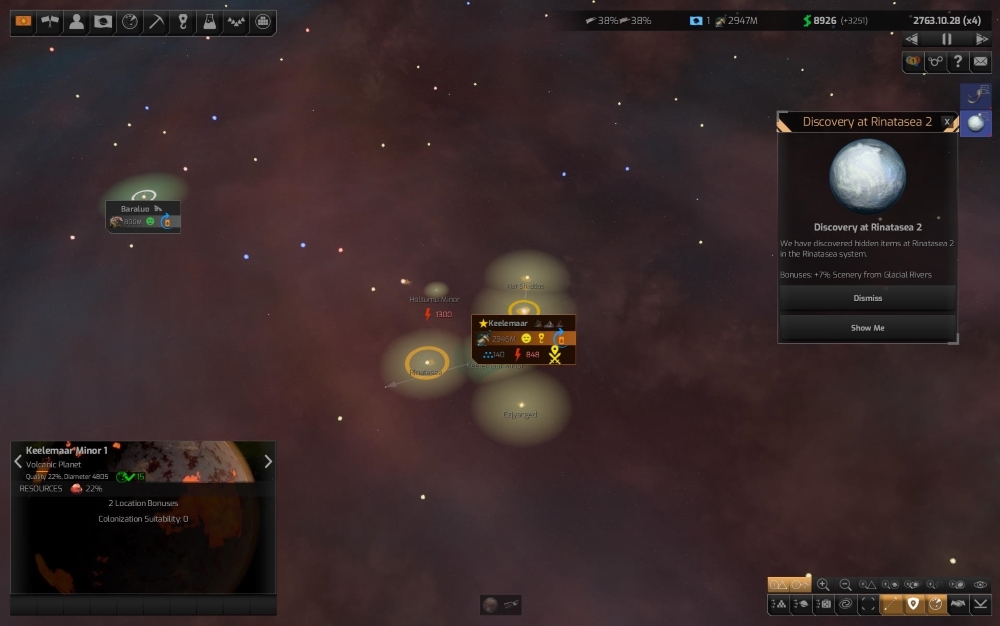 Ruins from ancient times can include a variety of discoveries and can also have multiple bonuses which could apply just to that location or even to your entire empire, if you control them.  Ruins can also contain many surprises, some not very positive. 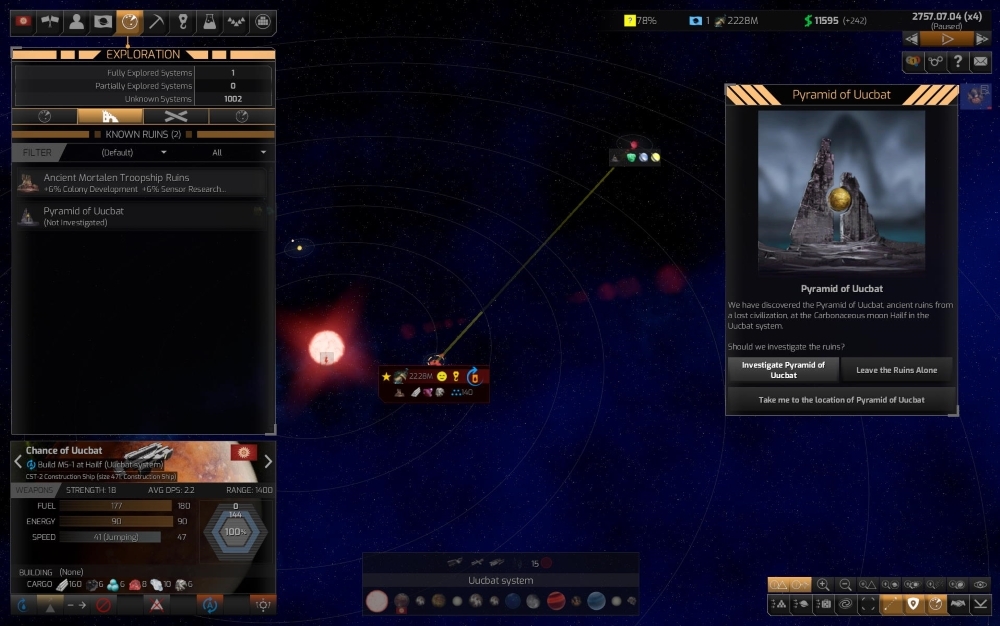 Rare construction and luxury resources can provide access to advanced technologies and ship hulls or boost the development and happiness of your worlds. 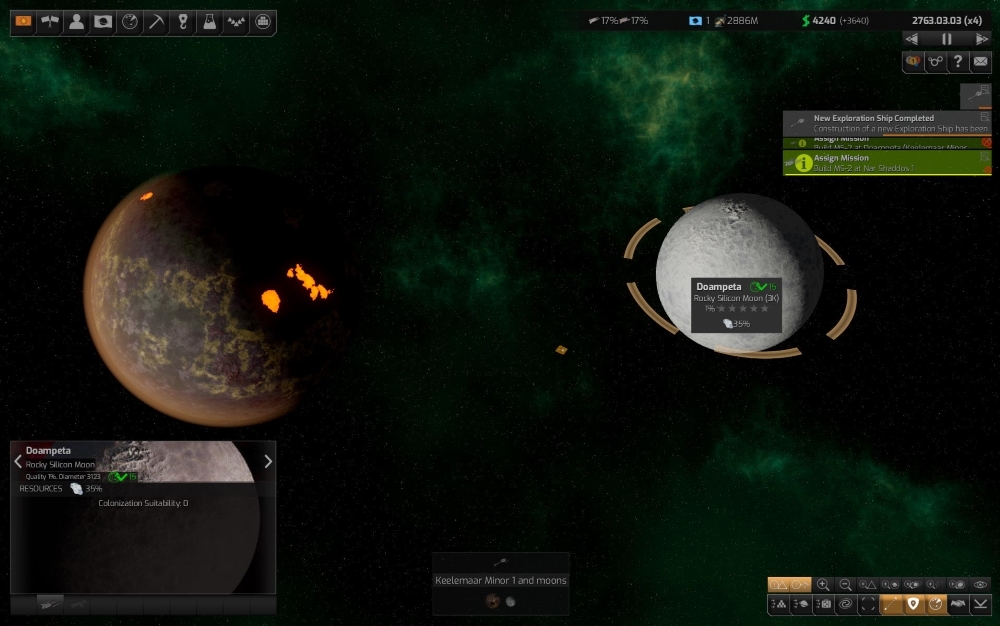 Ancient ships and stations can be repaired and put back into service for your fleets, salvaged for unique technologies, or left alone (some are more dangerous than you may think). 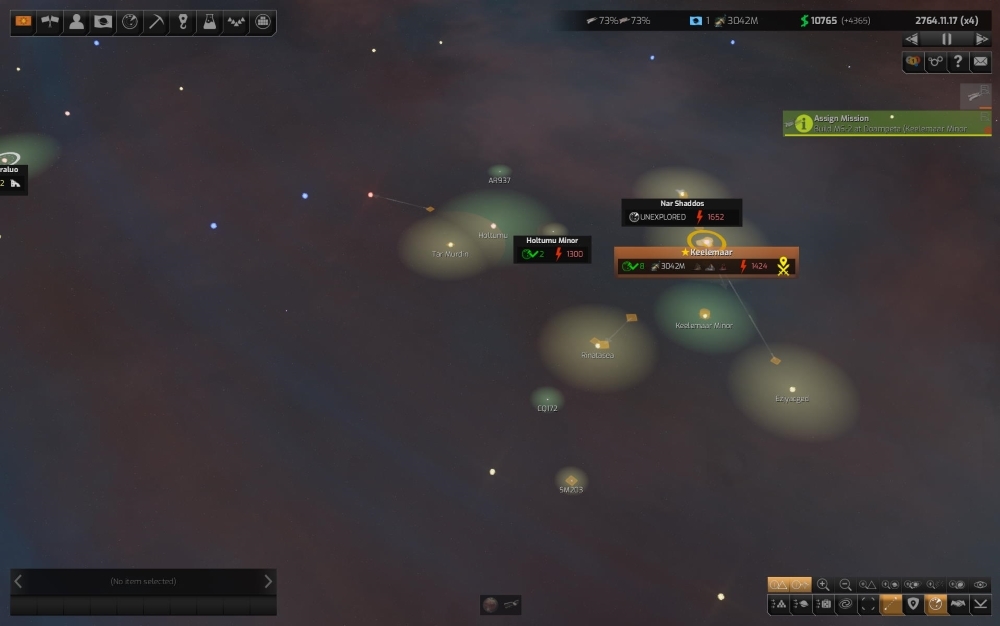 Finally there are also artifacts, which represent special relics from past ages which when moved to one of your worlds can provide a variety of benefits.

All exploration also comes with some risk though and space creatures, such as the dreaded stealthy Vordikar, are among the dangers any intrepid explorer must face.  Pirates also know many secrets, if you can convince them to talk. 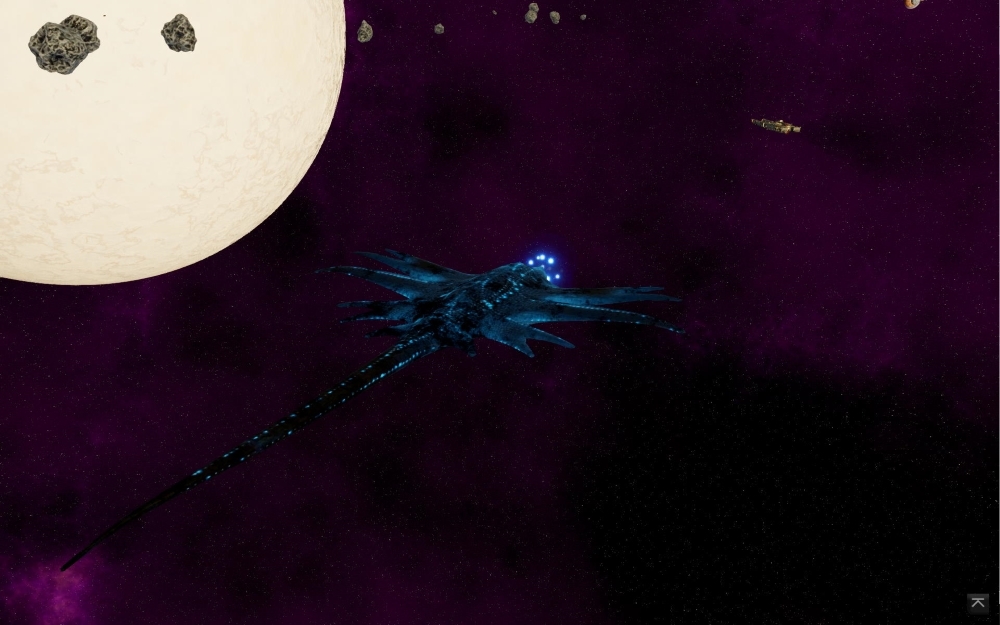 The new nebulas are also often worth exploring, though traveling through their ion, gravitic and radiation storms without sufficient shielding and repair can lead to the complete loss of your exploration ship.

We hope these additional layers of exploration and rewarding discoveries, along with the procedurally generated galaxies, will give you plenty to discover (or conquer)!