The inhabitants of Arcanus and Myrror

While the contest for the elusive Master of Magic is fought with great spells and ultimate wizard power, it is still all built on the sweat of the little folk down below, or so they tell you. You may be an ever powerful mage, but you need your cannon fodder... great men, women and creatures who will be manipulated into working and fighting for you, many that will die in blazing glory.

In our previous diaries we mentioned that all fourteen races are returning to Master of Magic, and here we describe and show some more of them, especially for players who may not know the original so well.

Your Wizard will choose a race they will lead at the start of the game, but as you grow in power and reach, you may conquer or otherwise gain new cities and thus rule over a diverse cast of people by the end of your playthrough.

Every race in Master of Magic is different. Not only visually, but also in terms of game mechanics. Some may have access to different sets of buildings, different numbers and types of units, or have special racial abilities, such as troll regeneration or draconian flying ability. Choosing the right people to rule over may dictate your tactics, especially at the start of the game.

Lizardmen are bipedal, aquatic reptilians. Physically, the lizardmen are small, resilient, and agile and can move on water with ease. What they may lack in stature, they make up in numbers. There are some theories that suggest common ancestry with the draconians, but neither race finds them convincing. Lizardmen form mostly tribal societies, and they tend to build settlements using simple technologies. They also prefer wetlands as their settling grounds and so, they tend not to be expansive, unless convinced otherwise by a strong Wizard.

Lizardmen are one of the Arcanus races and as such, they can be chosen as the starting race by any Wizard that does not start on Myrror.

Orcs are classed as demi-humans, and despite visual differences, they are often seen as close relatives to humans in terms of social structures, behaviours and cultures. Some say that the orcs are an exaggeration of all the bad that is seen in mankind. Despite their aggressive visage and very bad reputation, the orcs have actually become a very moderate society. They do not excel at anything in particular, but equally they are not bad at anything. Their workforce can be very efficient and under the right Wizard, the orcs can become a steadfast force.

Orcs are one of the Arcanus races and as such, they can be chosen as the starting race by any Wizard that does not start on Myrror.

High men are considered the most structured and civilised faction of humans. This society is strongly religious, with members of the priesthood being highly respected and valued and the Church standing as the bedrock of the society. High men have strong military if needed, with paladins leading the troops, but they prefer diplomacy to conflict, whenever possible. If led by a worthy Wizard, high men will prove to be steadfast and loyal soldiers.

High Men are one of the Arcanus races and as such, they can be chosen as the starting race by any Wizard that does not start on Myrror.

High elves are humanoid creatures, possessing great beauty and longevity. They are a highly civilised and ancient faction that is said to be one of the first that appeared on Arcanus. They see themselves as a benign force of wisdom, and they do favour diplomacy over warfare. As a result of their self-image, the elves can also suffer from a strong superiority complex, thus under the rule of a formidable Wizard, they can become a deadly force of dominance.
High Elves are one of the Arcanus races and as such, they can be chosen as the starting race by any Wizard that does not start on Myrror.

Beastmen are a motley collaboration of demi-human creatures that can loosely be defined as possession beasts, for their animal-like features. Those features are not as unified as those of the gnolls, nevertheless, many humans consider the two races kin. Beastmen do not have any recorded history or origin as a group – instead, there are whispers of such ‘beasts’ throughout folk tales. They are aggressive and highly adaptable, so a Wizard will have no trouble organising them into a strong army.

Beastmen are one of the Myrran races, as such, they can only be picked at the start by a Wizard possessing the Myrran Trait.

Dwarves are short, but sturdy demi-humans, heavily bearded, even amongst the female folk. Bloodlines and monarchy are the building blocks of a dwarven society and their traditions are set in stone. They value mineral wealth and the power of strong craftsmanship. Unlike other Myrran societies, dwarves practise the rule of law and do not care for evil pursuits, seeing them as unnecessarily emotional. They also do not care much for anything or anyone who is not a dwarf, making them both tough allies and even tougher rulers.

Dwarves are one of the Myrran races, as such, they can only be picked at the start by a Wizard possessing the Myrran Trait.

Dark elves are an immortal, ancient race, who share origins with their high elven cousins. They are said to have migrated from Arcanus to Myrror in the ages past. Be it willingly or by chance, their nature grew darker and more twisted with every decade spent in their new home. Like their high elven cousins, the dark elves are naturally gifted with the aptitude towards magic and the occult. But unlike their fair kin, the Myrror elves use their gifts for dark purposes, revelling in pain, hedonism, and the pursuit of cruelty.

Dark elves are one of the Myrran races, as such, they can only be picked at the start by a Wizard possessing the Myrran Trait.

Trolls are creatures born of the whimsy and cruelty of Nature itself. They possess little in the way of intellect, but they make up for it in brute force and an instinct of survival. In their natural habitat, trolls tend to be lazy and uninterested in expansion, but a strong Wizard is able to awaken the creatures’ natural instincts and push them to action. Troll blood is a sought-after commodity, as it possesses regenerative powers, as such, it is wise to disintegrate a troll enemy, otherwise it is likely to rise and walk away from the battlefield.

Trolls are one of the Myrran races, as such, they can only be picked at the start by a Wizard possessing the Myrran Trait.

In other news
We’ve finally put together the screen for the custom Wizard, here are a couple of work in progress screenshots where you can see what sort of choices you will be able to make.

Work in progress portrait selection and name change screen. You can choose the portrait you like and give your custom Wizard a name.

Work in progress Trait and Book selection screen. As you can see, you can choose to spend your points (the amount of points will also be customisable) on traits and magic books.

Depending on how many spell books you chose for any given domain, you will have access to some of the spells and you can choose which ones you start with. The more books you have in a domain the more powerful spells are available to you.

Lastly, here is a preview of two more of the re-imagined Wizards: 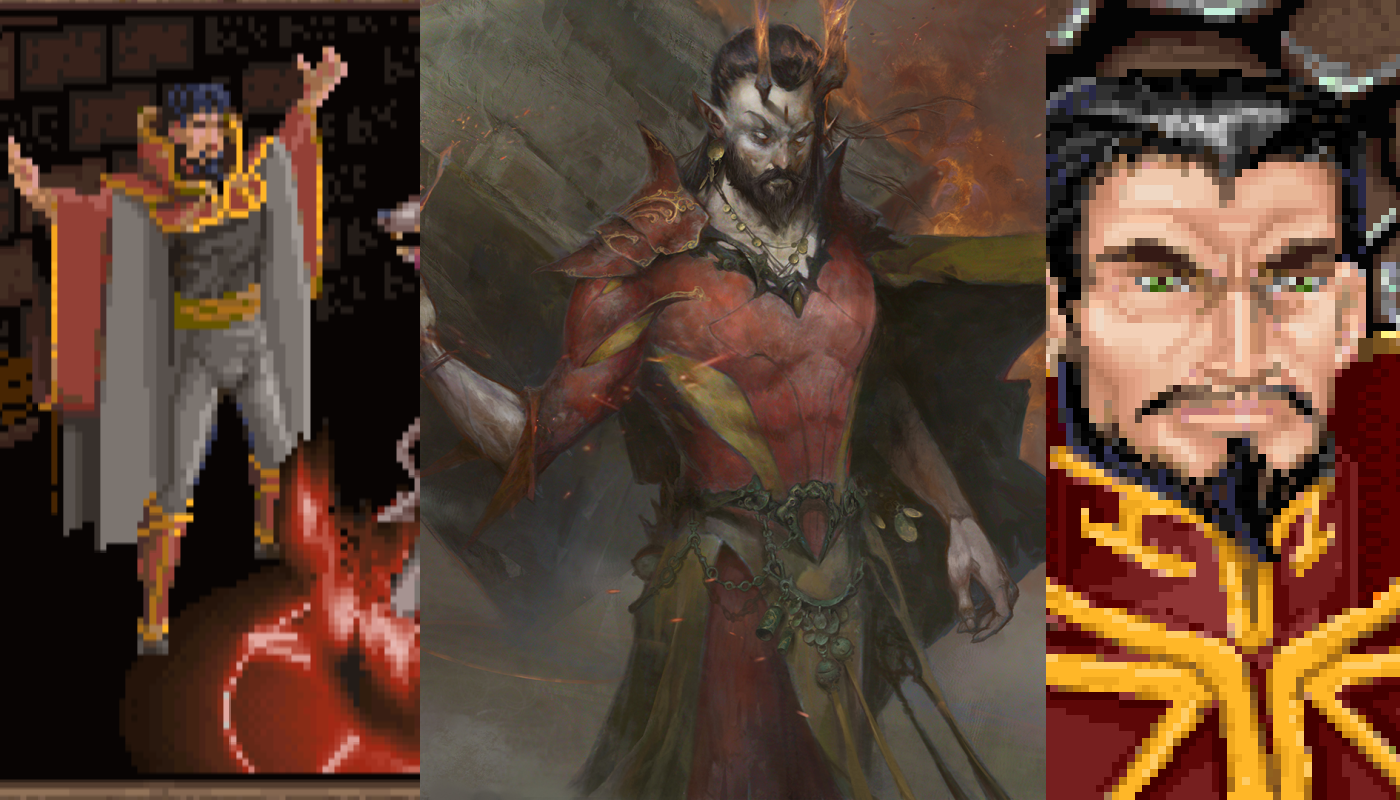 Tauron has given in to his demonic side and is no longer hiding in human skin. Oh, and he decided to grow his beard back... 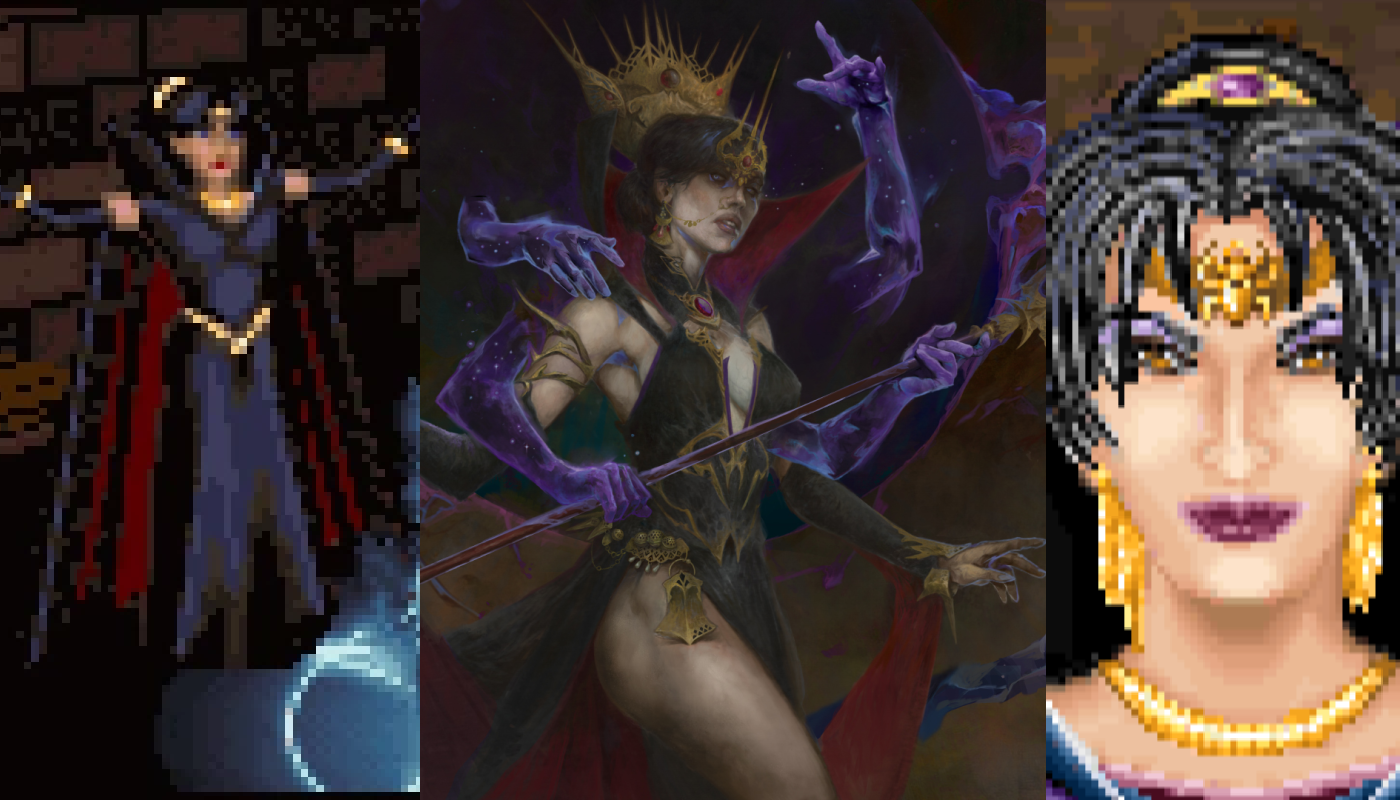 Kali, the powerful and mysterious mistress of the dark arts.

That’s all for now, see you next month. Don’t forget to join us on Discord for community discussion.