Allies Victorious - the last part of the Allied trilogy for Order of Battle, is out now. 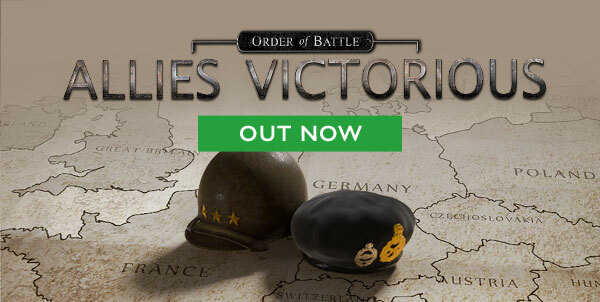 The new DLC depicts battles from the Allied Normandy landings in summer 1944 to the end of the war in Europe. The campaign began on D-Day, 6 June 1944, with Operation Overlord, the large-scale amphibious assault to land Allied forces in northern France. Afterwards, the player has to secure the rest of Normandy, and needs to defeat substantial German forces in the Falaise pocket. Following a successful breakout from Normandy, the liberation of Paris is in reach.

Like all previous DLCs, Allies Victorious also adds a number of new units for both Allied and Axis countries, and a few new Allied commanders. The new units are:

Tune in today on our Slitherine Twitch Channel at 7pm GMT where SgtZDog will show you the new DLC.

After downloading Allies Victorious, do not miss the chance to sign-up to the new tournament “Victorious Tournament”. You can sign-up here. There will be 3 Tournament Maps:

Libya - January 1942, The Afrika Korps and the Desert Rats face off in a battle to seize vital roads across Cyrenaica.

France - July 1944, US forces launch Operation Cobra to break out of Normandy and advance into Brittany.

The tournament follows Swiss Tournament rules: you can find the full list of rules here.

The first round will commence on Thursday, 6th October 2022 at 3pm GMT. No further entries can be accepted after the tournament has begun.

The tournament will last 3 rounds, 15 days each. Games are paired, so each matchup will be played both ways. All you need to do is sign up, then the system will pair you with opponents and create your PBEM++ games. You will be notified by mail of when the tournament is starting and when it will be time to play your turns.

To celebrate this moment, the DLC will be part of the Order of Battle: Allies Pack here. If you don't own Order of Battle yet, you can download the base game for free and you can buy the DLCs with up to 75% off discount.