Warhammer 40,000: Battlesector coming on console and Game Pass on December 2

Countless lurking shadows stir to contest the glory of the Imperium. Be certain that your own mind is not one of them.

We’ve got a lot of Warhammer 40,000: Battlesector news to cover, so let’s get straight into it!
It’s been a busy month in the Black Lab Games studio. Since the last dev diary, we released a patch that included balancing changes, fixed various bugs that have been reported since launch, and added a number of quality of life improvements.

We’ve continued to work on getting the game ready for release on consoles. We are asked frequently when the game will be released, and we can now share a release date.

Warhammer 40,000: Battlesector will be coming to Xbox One and Playstation 4 on
December 2.

We are immensely excited to bring Battlesector to consoles. We feel that we’ve maintained the visual fidelity and gameplay pace of the PC version, which is an achievement on previous-gen console hardware.

The only feature that hasn’t been implemented on consoles is the asynchronous (PBEM) multiplayer system. That said, in addition to live multiplayer matches, we feel that the inclusion of hot-seat multiplayer - where two players compete by taking turns to plan and execute their moves on the same console - more than makes up for it. Sitting next to your opponent on the couch as a brutal battle unfolds on the battlefields of the 41st Millennium is a lot of fun!

That’s not all. Warhammer 40,000: Battlesector is going to be released on the Windows Store on the same day, on December 2.

The same version will be part of the Game Pass, Microsoft’s subscription service for Xbox and Windows.

We’ve recently been beta testing new additions to the game with members of our Discord community, including tournament support and new units.

At the same time as we release the game on consoles, we’ll be deploying an update for PC that includes support for the Slitherine Tournament system. For players that like competitive multiplayer, tournaments will be a feature you’ll love. Tournaments provide a structured way to engage with other players and take multiplayer to a new level. Expect to see a tournament announced soon after this update is released.

We are also introducing a new Army Cohesion mechanic. Initially, we’ll be introducing this system to multiplayer and skirmish battles. Armies built with a diversity of unit types will gain bonuses to Momentum in battle. When setting up a new multiplayer match, you’ll be able to make using Cohesive armies a requirement to join the match. This system is intended to prevent the use of “spam armies” when they are not welcome.

In the same update, we’ll also be including support for our first DLC’s. We’ll be releasing two small DLCs that will add units to the existing Blood Angels and Tyranid armies. 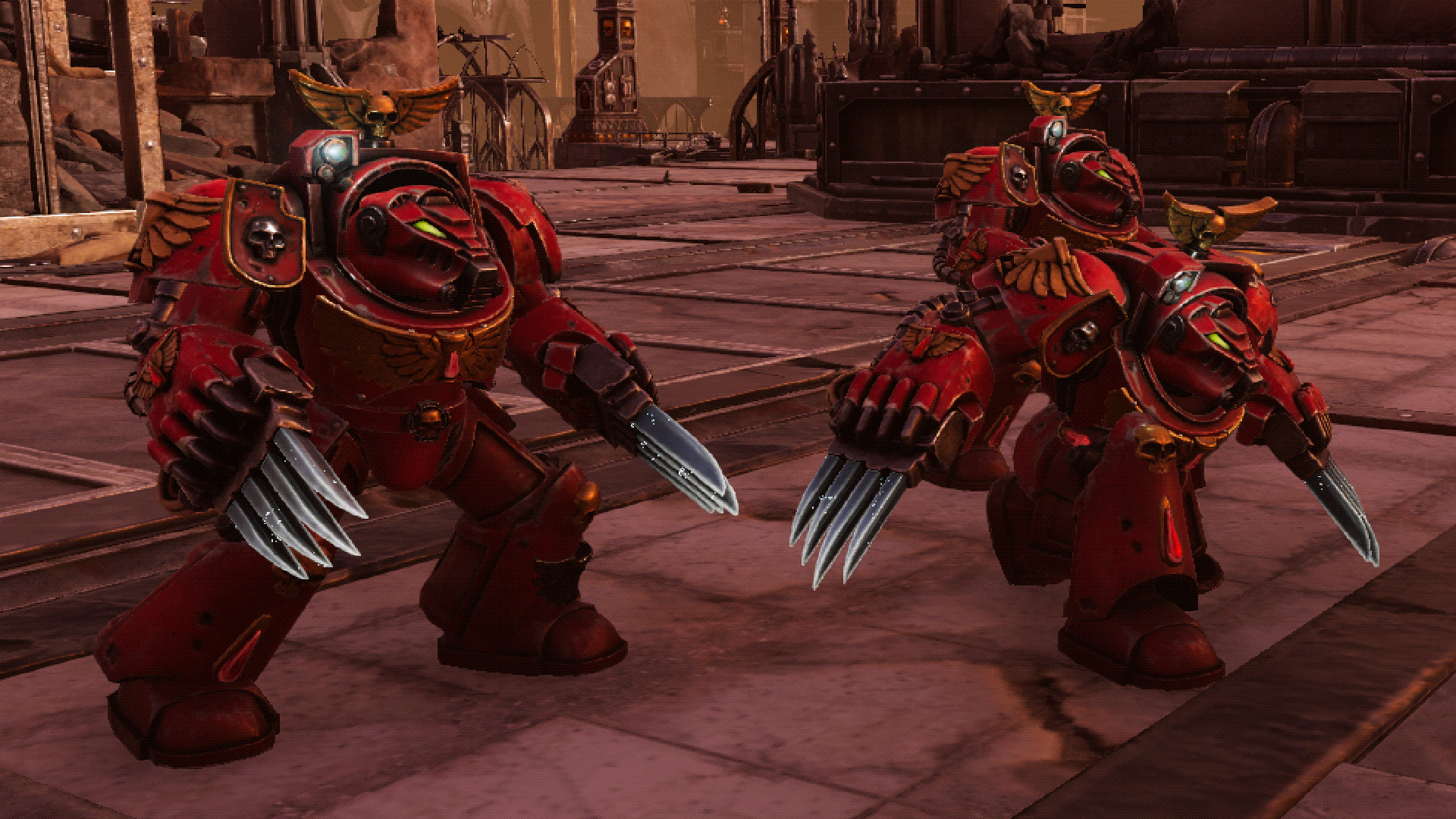 The Sanguinary Guard are the exemplars of the Blood Angels nobility and skill. Paying homage to the Great Angel Sanguinuis, they quickly traverse the battlefield using their Jump Pack and can be equipped with a variety of ranged and melee weapon options. The Heirs of Azkaellon ability looks to the first commander of the guard for guidance, providing powerful combat buffs - particularly when used near the HQ Command unit. 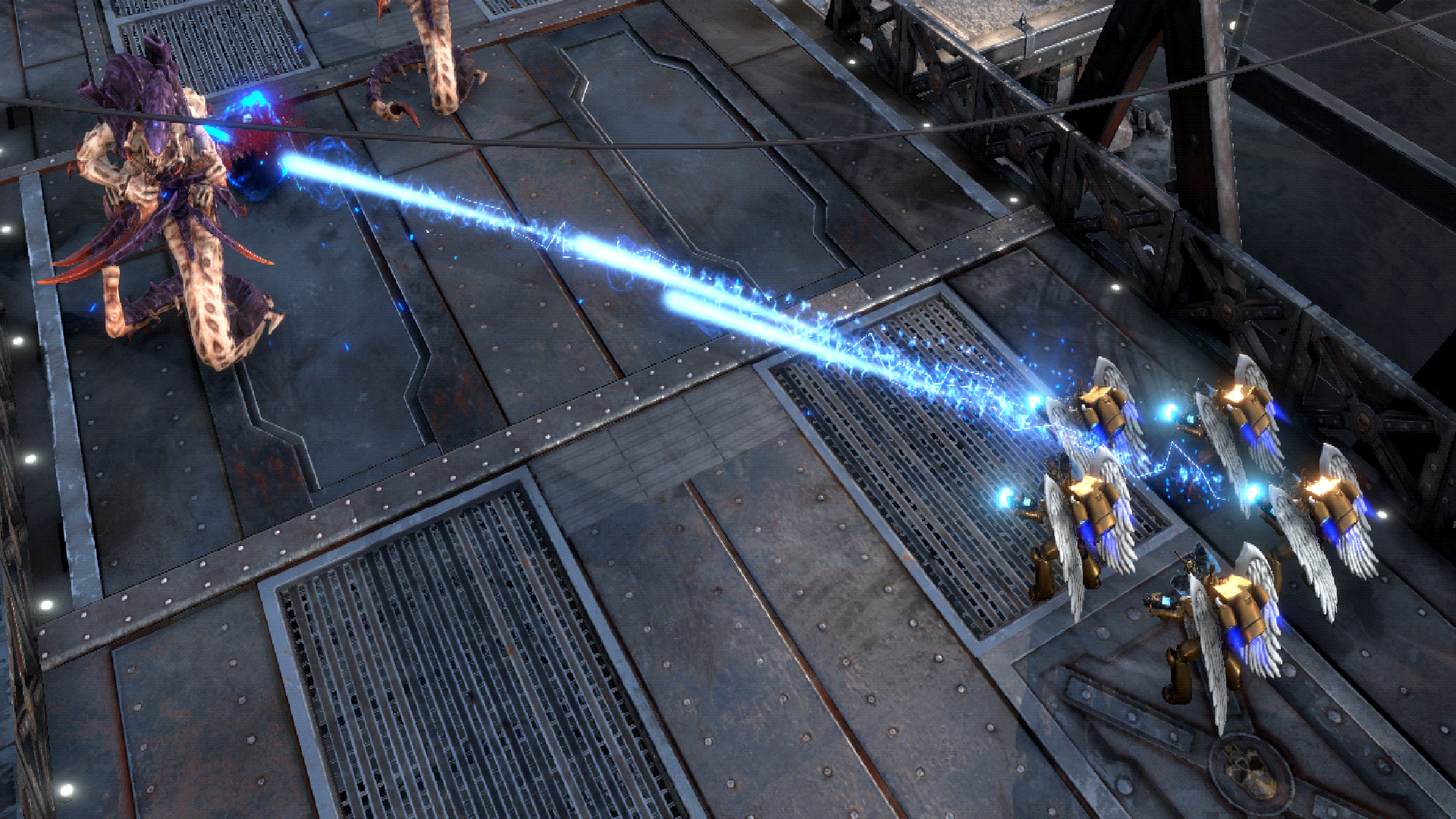 In the Tyranid Elites Pack, you’ll get access to the Broodlord and Hive Guard.

The Broodlord is a monster from which nightmares are made. They are superior melee warriors with a natural ability for disrupting the minds of nearby prey. Deployed adjacent to swarms, their Evolved Brood Telepathy ability makes the nearby units far more deadly in combat. The Paroxysm ability deploys the malevolent will of the Hive Mind to inflict terrible damage on an opponent, inflicting nerve-wracking agony and making them ineffective in combat.

Hive Guard offers some deadly ranged attacks, wrapped in a heavy armour of lumbering carapace. Shockcannon Spines are especially deadly against vehicles, whilst the Impaler cannon can ignore cover penalties.

These units will be available for in the campaign, and to add to your army lists in skirmish and multiplayer battles.

These DLCs will be a small taste of what’s in store for the future of Battlesector, with new armies, game modes and features all in the works. Keep an eye out for the Slitherine Home of the Wargamers event taking place on the 14th of December, during which you’ll get the first look at the new faction that we’ll be releasing early next year.