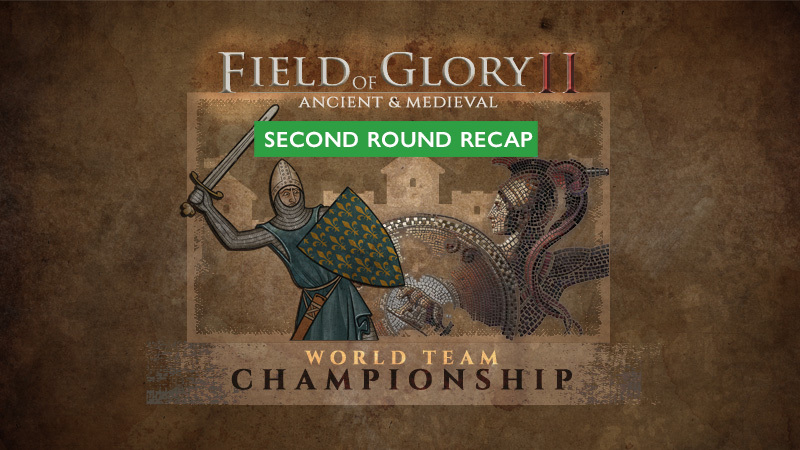 The second round is over, and here’s a recap of what happened:

Group B
“Team Russia” won easily the 4 games vs “Italy 2”: no chance for the Italians against the Russian battleship! The same result for “Inglorious Brits” vs “Europe 1” (“Beer and Cheese” forever), 4 victories for the British and full points for the English team in group B. In this group everything is settled for qualification: Russian and Brits got the green light to the KO phase.
The last round is going to be interesting. The big match between Russia and the “Inglorious Brits” for the 1st place and another entertaining challenge for the wooden spoon between “Italy 2” and “Europe 1”, different targets but tons of excitement!

Group C
The group of the death! The Polish team confirmed its leadership winning 3 matches against the Nordic team, this result gives to Poland the first place and green light to KO phase. The match between “Italy 1” and “Terror Australis” finished with the Aussie’s marginal victory 10 to 6. There is just 2 points difference between the second position occupied by the Nordic team and Aussie and the fourth place occupied by “Italy 1”.
The last round will be interesting: “Italy 1” vs Poland and “Terror Australis” vs “No Nonsense Norse” are both matches with a high level of adrenaline!

Group E
“Furor Gallico” and “Qin” drew their challenge, and the French confirmed their brilliant condition. English team “Cry Havoc” won 3 matches against the Canadians “Hammers of the North”. In this group we have a Chinese leadership and France in the second place, the last round will bring us a nice challenge between Qin and “Cry Havoc”. The British didn’t start the tournament in the best way, but of course the skills of this team are well known and still remains one of the favorites for the title. “Furor Gallico” and “Hammers of the North” is the second match of the last round. Canadians want to conclude the tournament with a surprise… the French are warned.

Group F
In this group, we have 2 teams in the first position, the American legionaries of “Continental Legion” and the “World’s Condottieri”. We don’t forget the kiwis that are pursuing the leading teams and have the same chances as the others for the first position. The last round will be interesting to follow but it is quite sure that Americans, Condottieri, and kiwis got the green light for the KO phase, the last round will decide the final position in the standing. The Chinese lack experience, but in the last round they will do the best for scoring at least a victory.