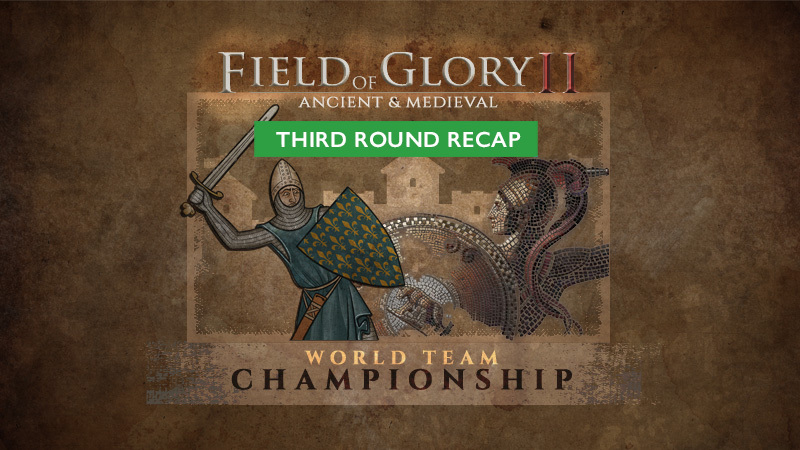 The last round of the WTC group stage had some interesting results and we'll be covering them in this final recap before the KO stage begins:

Group A
The UK team “Armchair Heroes” won against the French team “Furia Francese”, 12 to 4. This means “Furia Francese” has lost their qualification to the KO phase by just 1 point! That’s incredible. A brilliant victory by the American team “Hell on the wheels” vs “Agema Australis” secured them the second place spot.

"The Armchair Heroes” and “Hell on the wheels” qualified.

Group B
The Russian team and “Inglorious Brits” were already qualified, so their match only determined who would be first in the group. That spot was taken by the Russian team after a series of close games. Teams Europe 1 and Italy 2 drew in the end as, although the Italians got their first victory, 2 games didn’t finish in time and no points were been assigned to both teams.

Group C
Teams “Terror Australis” and “No Nonsense Norse” qualified after a perfect draw result, 8 to 8. This put them at 22 points each going into the KO phase. Team Italy 1 did its best against the Polish teams, but they needed a solid victory to qualify. A final score of 7 to 5, sadly, was not enough.

Group D
The leadership of the American team “Pershing Pikes” was confirmed when they won 8 to 4 in the last challenge against team Serbia. The same result occurred for team Europe 2 vs team Rest of the World, with team Europe 2 taking second place, a really unexpected result. In the ranks of Europe 2 there are 2 Spanish guys, an Italian and “Blagrot” who is British. They now have new supporters as they carry the hopes of the now eliminated Italian teams, Forza Europa!

Group E
In this group, team “Furor Gallico” had another great victory against the Canadian's “Hammers of the North”! The match between the British team “Cry Havoc” and the Chinese team “Qin” was dramatic. For the British was necessary to obtain a decisive victory to get qualified. Tyronec and Triarii secured it for the British and KO phase became a reality.

Group F
Team “Continental Legion” won the challenge vs team “World’s Condottieri” and maintained first position, with team New Zealand doing the same vs the Han Chinese team. The Americans and the Kiwis finished the group stage very close to each other, with just 1 point of difference.

In the first phase of the KO phase, we will have some very interesting challenges. In particular the “Civil War” between the American teams “Hell on the Wheels” and “Pershing Pikes”. 3 Americans teams and 2 British teams are in the right-hand side of the KO table with Serbian, French and Aussie teams completing the line-up.

In the left-hand side of the table, we find more of a variety of teams: Norse, Chinese Qin, New Zealand, “Furor Gallico”, Russia, Poland, “Armchair Heroes”, Europe 2 and “World’s Condottieri”. In this bracket, one of the best challenges is between “Polish Companions” and “Qin”, with the winner being impossible to predict.